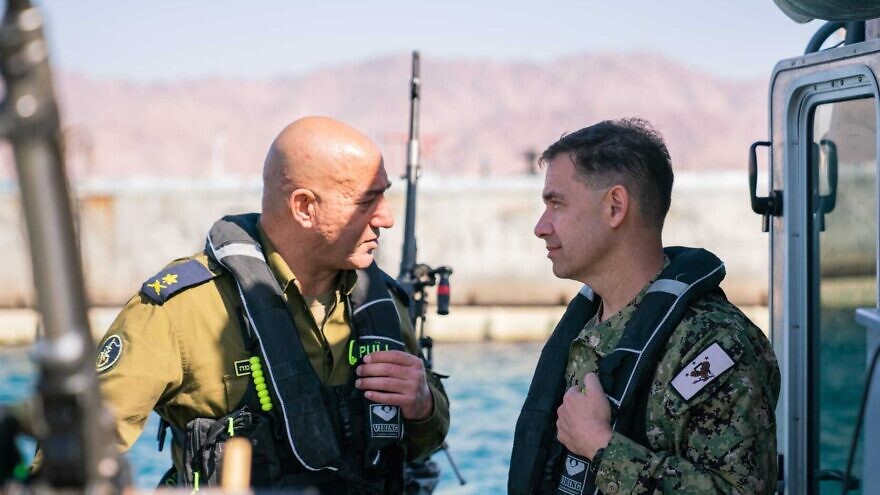 (March 31, 2022 / JNS) The Israeli Navy and the U.S. Fifth Fleet kicked off their largest-ever joint exercise this week, the Israel Defense Forces announced on Tuesday.

The Intrinsic Defender naval exercise is slated to last 10 days and is simultaneously taking place in the Mediterranean and the Red seas, said the Israel Defense Forces in a statement.

“Participating in the exercise from the Israeli Navy will be approximately 300 regular servicemembers and commanders, two missile ships, a team from the Underwater Mission Unit, a team from the Snapir Unit (Visit Board Search and Seizure Unit) and a medical team. Participating from the U.S. Fifth Fleet will be approximately 300 soldiers and commanders,” said the statement.

“The exercise began with a joint briefing on the Red Sea region. The briefing was led by the commander in chief of the Israeli Navy, Vice Adm. David Saar Salama, and the commander of U.S. Naval Forces Central Command, the U.S. Navy’s Fifth Fleet and Combined Maritime Forces, Vice Adm. Brad Cooper … [his] fourth visit to the Israeli Navy in his current position,” the statement continued.

Naval scenarios in the exercise include sea combat, firing exercises, vessel protection, sabotage, the neutralization of naval mines, search-and-rescue scenarios and the provision of medical aid at sea.

“The exercise aims to expand the Israeli Navy’s operational abilities and deepen the shared learning process,” said the IDF.

“The Israeli Navy and the U.S. Fifth Fleet are well-aware of challenges in the naval arena. One of the ways to deal with these challenges is cooperation between friends and nations, cooperation between nations,” said Salama. “The United States is a very important ally of the State of Israel, the IDF and the Israeli Navy. We once again are at the beginning of another exercise—an exercise that will help us to improve and strengthen cooperation.”