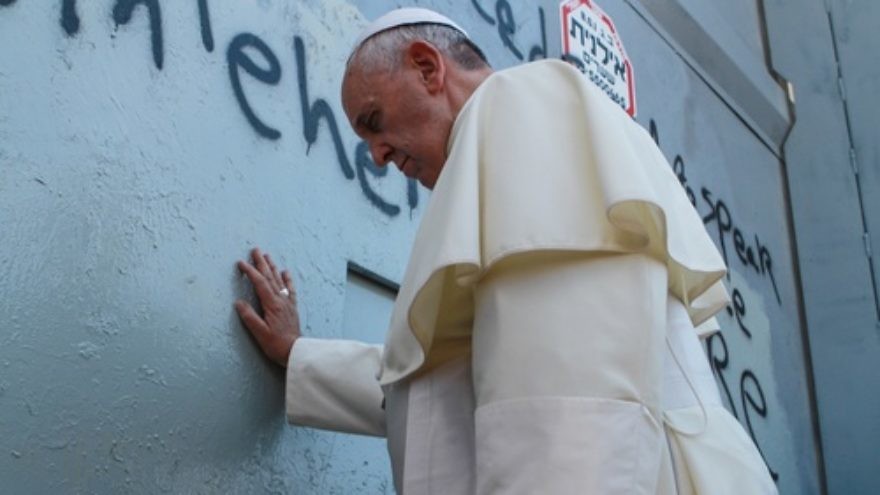 Pope Francis touches the Israeli security barrier on his way to lead a mass in Bethlehem, on May 25, 2014. Credit: Nour Shamaly/POOL/Flash90.
Republish this article
1177 WORDS
Spread the word.
Help JNS grow!
Share now:

(May 27, 2014 / JNS) After two intense days of religious ceremonies in Bethlehem and Jerusalem, meetings with Israeli and Palestinian officials, unscheduled photo opportunities, and debilitating traffic arrangements, Israelis and interfaith relations experts are trying to attach the appropriate symbolism to Pope Francis’s visit to the region.

Nearly every stop made by the pontiff was subjected to simultaneous scrutiny and praise. While long-term tensions between the Jewish people and the Catholic Church were made apparent by the trip, some experts are acknowledging a thaw in Israel-Vatican relations.

“The Jewish people and the Catholic Church in recent years have found that their 40 years of dialogue have paid off and friendly relationships have resulted,” said Betty Ehrenberg—executive director of the North American branch of the World Jewish Congress and chairperson of the International Jewish Committee on Interreligious Consultations, an umbrella organization representing prominent Jewish organizations in discussions with leaders of other faiths.

Ehrenberg, who attended a meeting between the pope and Israeli President Shimon Peres, told JNS.org that there is “a friendship between the Catholic Church and the Jewish people that should be nurtured” and that there “certainly was a warmth to this visit, and you can’t deny that.”

“We have to realize that we have problems in common, and we have to work together on these problems,” she said.

Also important, in Ehrenberg’s estimation, is the message that the visit sends to Middle East Christians who find themselves under the constant threat of attack.

But by visiting the Middle East, the pope “has shown that he is present and that he cares, and gives Christians here in the region strength,” Ehrenberg said.

“Hopefully we can work together with the Catholic Church to help ensure religious freedoms for everyone around the world, and for protection,” she said.

Pope Francis planted roots for improved interfaith relations even before being elected pontiff, said Giuseppe Platania, founder of Italy’s Israel Allies Caucus, an alliance that fosters cooperation and dialogue between the Italian Senate and the Israeli Knesset.

Platania said Francis made a “significant” symbolic gesture during his first week as pope by making a phone call to the chief rabbi of the Jewish community in Rome.

“When you become a leader of over a billion people, what you do carries tremendous weight,” he said.

Appropriately, then, every stop by Pope Francis on his Israel trip—planned and unplanned—was scrutinized for its symbolism.

According to Platania, Francis was not the first pope to visit Palestinian-controlled territory before setting foot in fully sovereign Jewish territory, and the order of the pope’s itinerary may have had more to do with religion than politics. The New Testament identifies Bethlehem as the birthplace of Jesus.

“Maybe there is a stronger Christian connection to start [the trip] by going to Bethlehem than by going to the Kotel,” Platania said.

Ehrenberg said there is nothing new about the Vatican’s policy toward Palestinian statehood.

“The Vatican recognized a Palestinian state many years ago already,” she said. “So anyone surprised by this doesn’t remember when this first happened in the ’80s.”

The pope then surprised many by making an unscheduled prayer stop at concrete sections of a wall separating Bethlehem from Jerusalem, erected in 2002 to prevent terror infiltrations into Jewish population centers. He prayed in front of graffiti that read “Free Palestine” and (in broken English) “Bethlehem look like Warsaw Ghetto,” leading to widely distributed photos.

Ehrenberg said the photo-op in front of the Israeli security fence “can be interpreted as some kind of a PR coup for the Palestinians,” but that Israeli Prime Minister Benjamin Netanyahu addressed the issue when he spoke to the pope “and explained that the fence was built particularly to prevent the acts of terror that the international community is so against.”

“It’s not because Israel wanted to build it there,” Ehrenberg said of the fence. “It was forced upon Israel by terrorist attacks. [Netanyahu] showed the Pope the plaque remembering the horrific terrorist attacks that were perpetrated [at the AMIA Jewish center] in Buenos Aires, which the pope knows only all too well.”

Platania said, “This pope is coming across as very charismatic, very people-oriented. Some people think that’s great. Other people think he has an agenda. Praying at the security wall was a sign of peace, but I wonder if he wanted to come across as exposing the wall and Israeli policy.”

Even “the best of our friends, eventually even with the best intentions, may want to use that friendliness, the diplomatic efforts, smiles, and phone calls to rabbis to help promote their own agendas,” Platania explained.

A longer-term issue between Israel and the Vatican relates to valuable Jewish artifacts dating back to the period of the First Temple in Jerusalem and believed to be held in Vatican archives that have been off-limits to Jewish leaders.

“The issue of artifacts is a big deal,” Platania said. “Many people have asked to visit the archive, and have been denied. It is believed that there are a lot of items that belong to Jewish heritage on all levels—things that could potentially be from the Temple, but even if they are not, still belong to the Jewish people, and could be given back.”

Returning the items, according to Platania, would be an “amazing act of reconciliation and friendship.”

Yet the Israeli government appears patient on the artifacts issue, and is hopeful that there is much to be gained by improving relations with the Vatican. Peres and Palestinian Authority President Mahmoud Abbas, meanwhile, accepted an invitation from the pope to pray for peace at the Vatican. That gathering is scheduled for June 6.

“The relationships certainly will continue and will deepen,” said Ehrenberg. “Shimon Peres is going to visit the pope in two weeks, so let’s see where that leads.”