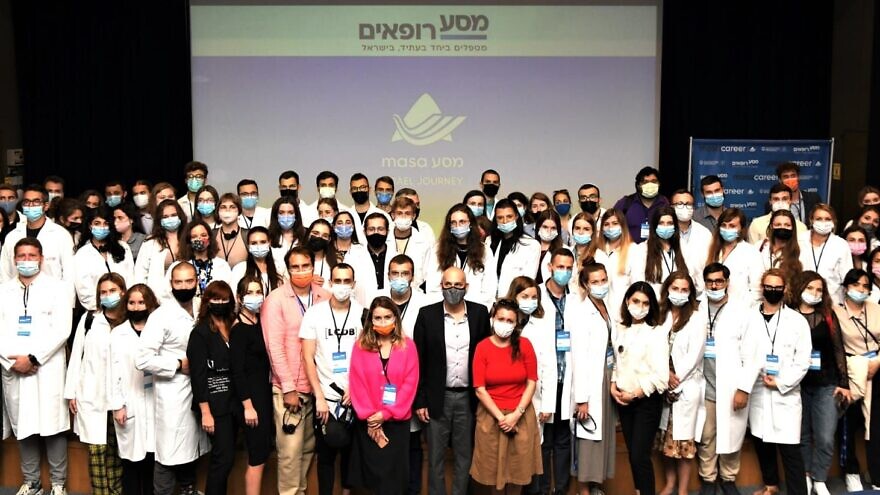 (November 16, 2021 / JNS) Masa Israel Journey, founded by the Jewish Agency for Israel and the government of Israel, celebrated the arrival of more than 100 certified doctors from six countries at the opening ceremony of the Masa Doctors program on Monday.

The event, which took place at the Eretz Israel Museum in Tel Aviv, kicked off the eight-month program that prepares fellows for an exam through the Israeli Ministry of Health that functionally grants passing Fellows an Israeli medical license.

The Fellows come from countries such as Russia, Ukraine, Belarus, Uzbekistan and Lithuania.

Masa CEO Ofer Gutman and Israeli Minister of Aliyah and Integration Pnina Tamano-Shata were among the speakers at the event with greetings by Health Minister Nitzan Horowitz.

In the past 13 years, the Masa Doctors program has brought almost 1,000 qualified doctors from different countries to Israel. Nearly 95 percent of Fellows make aliyah each year, adding to the growing list of medical professionals Masa has assisted in joining Israel’s workforce in the health-care sector.

One of the speakers at the Nov. 15 event was Nikolai Haiman, 31, an alum of the program from Ukraine. He said he and his wife came to Israel to pursue being licensed physicians in Israel. After passing the medical exam, both made aliyah, where he first worked as an infantry-unit doctor. Today, he is a major in the Israel Defense Forces and is interning as an anesthesiologist at Soroka Medical Center in Beersheva.

“The program gives doctors the opportunity to start a new path in the Israeli medical world,” he said. “It is the best option for an easy and swift integration into Israel and the Jewish community.”

Nearly 90 percent of Fellows on the program pass the medical exam and receive their license to practice in Israel—a passing rate that is nearly 15 percent higher than the average.

Masa also celebrated expanding into South America with plans to bring at least 50 doctors on a Spanish-speaking program in 2022.

The program is made possible through collaboration between Masa; Rambam Hospital in Haifa, operated by Israel Experience; and Soroka Medical Center, operated by the Tlalim Group.