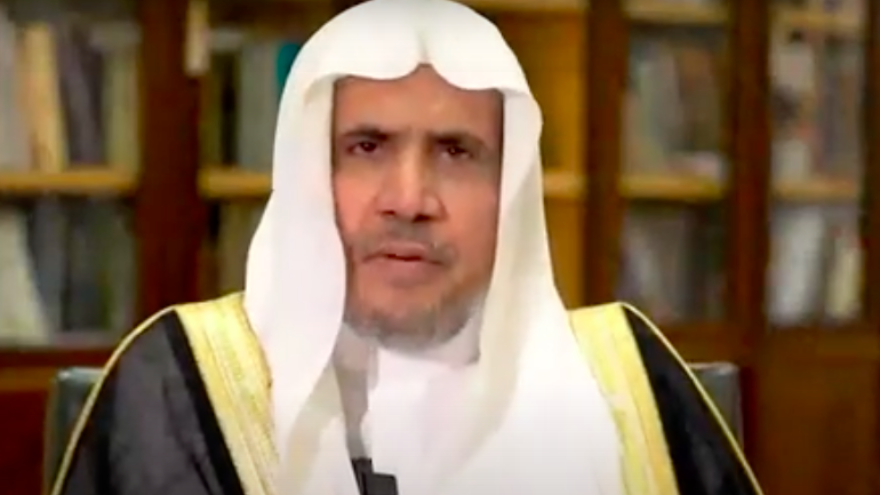 (June 9, 2020 / JNS) Secretary General of the Muslim World League Sheikh Mohammed Al-Issa was honored with an inaugural award at an online event for his contribution towards fighting anti-Semitism.

He is the first recipient of the prestigious annual award given by the Combat Anti-Semitism Movement and American Sephardi Federation to Muslim leaders engaged in the fight against anti-Semitism. Al-Issa was recognized for uniting people of all faiths, publicly condemning Holocaust denial, and for inspiring the next generation to tackle hate and promote peace.

In an address at the event, titled “How Muslims and Jews Can Combat Anti-Semitism Together,” Al-Issa spoke passionately about the need for unity in order to overcome anti-Semitism and hatred.

Al-Issa has consistently provided a powerful voice against extremist ideology and is considered the leading global voice for moderate Islam across the Sunni world. He has frequently condemned Holocaust denial, acts of anti-Semitism and the extremist distortion of religion. In January, he led the Muslim World League on a historic visit of senior Muslim leaders to the Auschwitz-Birkenau concentration camp.

Speaking from Saudi Arabia, Al-Issa encouraged communities to work together, saying, “Whereas Jews and Muslims lived centuries together, in these last decades we have sadly grown apart. Now, we must rebuild the bridges of dialogue and the bonds of partnership between our communities. … Since taking over the Muslim World League, it has been my mission to fight the forces of hatred and violence.

“Earlier this year, our efforts in particular to shatter the ideology of anti-Semitism culminated in a visit to the Auschwitz-Birkenau death camp, where I stood united alongside my Jewish brothers and said:  Never again. Not for Jews, not for Muslims, not for Christians, not for Hindus, not for Sikhs. Not for any of God’s Children. History’s greatest horror, the Holocaust, must never be repeated.”

Al-Issa reiterated his firm condemnation of Holocaust denial, stating, “There are those who still try to falsify history. Who claim the Holocaust, the most despicable crime in human history, is fiction. We stand against these liars, no matter who they are or where they come from. … True Islam deems any attempt to deny or underplay the brutal horrors of the Holocaust as the ultimate insult to the dignity of all those who perished.”

He also condemned those using the current coronavirus pandemic to leverage hate, saying “Today, we all face a common enemy in the form of the coronavirus. It has spread to every corner of the globe, showing us that it does not care if a person is Muslim or non-Muslim, Jew or non-Jew, rich or poor, educated or non-educated. … Especially during times of economic challenge and social isolation, the danger of communities turning inward and rejecting the other is even greater. And we know that extremists of all type are seeking to exploit the current uncertainty to push an ideology of hatred and division.”

Al-Issa condemed hate crimes across the world, including anti-Semitic attacks, saying, “Your community has tragically been the target of several terrorist attacks. In Pittsburgh; in San Diego; in Munsey, New York; in Halle, Germany. I condemned each and every one of these horrible assaults upon humanity. As if they were attacks on Muslims.”