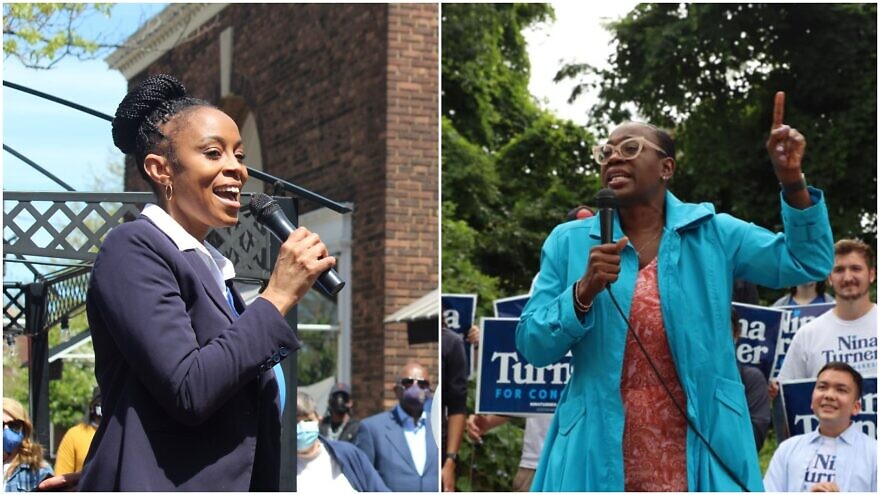 (July 29, 2021 / JNS) A Democratic Party primary in a special election in northern Ohio has become a battleground between mainstream elements and the left-wing progressives seeking to change their party’s direction on a myriad of issues, including its support for Israel.

With early voting already in progress and only a few days before the election on Aug. 3, national political organizations, including those with pro-Israel agendas, have been putting resources behind the two leading candidates in the race to fill the seat of former Rep. Marcia Fudge (D-Ohio), who was confirmed as secretary of Housing and Urban Development in the Biden administration.

Fudge’s resignation sparked a feverish race in Ohio’s 11th Congressional district, where the winner of the Democratic Primary is a shoo-in to win the election in a district that skews heavily for Democrats.

The majority-minority district covers most of the city of Cleveland before stretching south to capture parts of Akron. Black voters make up around 54 percent of the district’s residents, though it is also home to Ohio’s largest Jewish population, with 5 percent.

According to Howie Beigelman, executive director of Ohio Jewish Communities, a Jewish community advocacy group, the district—both in the Cleveland and Akron areas—has around 45 Jewish organizations, including communal organizations, synagogues of every denomination from reform to haredi, day schools and senior-living facilities—more than anywhere else in Ohio.

The primary has 13 candidates remaining. Since early summer, however, two candidates have stood out from the rest: former State Sen. Nina Turner and Cuyahoga County Council member Shontel Brown.

From the beginning, Turner, a political veteran who was a national surrogate of presidential candidate Sen. Bernie Sanders (D-Vt.) in 2016 and the Sanders’s campaign national co-chair in the 2020 election, led by a wide margin in the polls.

Turner’s involvement in national and statewide progressive politics gave her the name recognition not only to lead early on by double digits but also to raise a significant amount of money.

From April through June, polling indicated Turner had a wide lead over her opponents, hovering at around the 40 percent and 50 percent marks, while Brown stayed in the teens or 20 percent marks.

But by July—notwithstanding the inaccuracy of congressional district polls—that lead appeared to tighten as more high-profile endorsements rolled in for both candidates. While early endorsements came in for Turner, Brown’s campaign caught a breeze that brought in numerous national organizations and top-level Democrats.

Turner’s outspokenness and willingness to buck the Democratic Party throughout her career appeared to have caught up with her, making the race yet another battle between establishment Democrats loyal to the Biden administration and House Speaker Nancy Pelosi, versus left-wing Democrats represented by the group called “The Squad” in the House of Representatives.

“I think there are a lot of kind of national establishment-style Democrats who just feel like Turner would be a thorn in the side of leadership along the same lines as the so called ‘Squad,’ ” said Kyle Kondik, managing editor of “Sabato’s Crystal Ball” (referring to longtime politics professor and political prognosticator Larry Sabato) at the University of Virginia. 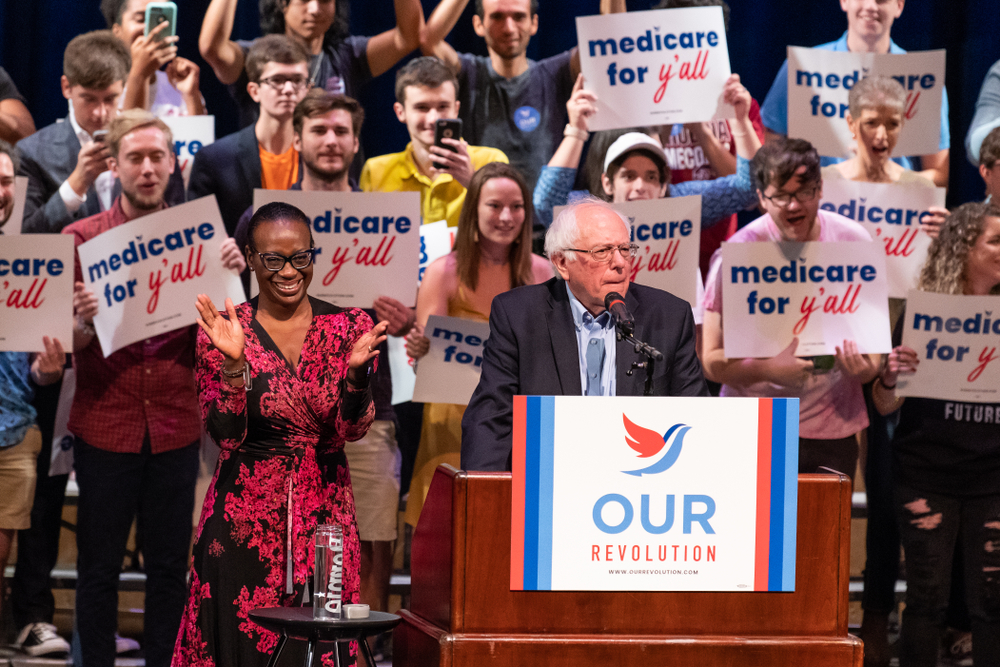 Bernie Sanders and Nina Turner share the stage during a public rally on health care, organized by political organization “Our Revolution” in October 2018. Credit: Crush Rush/Shutterstock.

Opponents of Turner have accused her of being disloyal to the party during the general election—most notably, saying on national television in the run-up to the 2020 general election that voting for U.S. President Joe Biden versus former President Donald Trump was like eating a bowl of excrement and supporting Green Party candidate Jill Stein over the party’s nominee.

Kondik said that if Turner was to lose the race, it would likely be because she is seen as too left-wing even for her district, of which as many as 80 percent voted for Biden.

National party figures, including former Democratic presidential nominee and former secretary of state Hillary Clinton, began lining up to support Brown, especially in the last weeks before the primary. While both candidates are black, the Congressional Black Caucus backed Brown, despite her possessing less political experience and nowhere close to the national profile of Turner. Her latest major endorsement came from House Majority Whip Jim Clyburn (D-S.C.), who is credited with turning the tide for the Biden presidential campaign before the 2020 South Carolina Primary. Clyburn plans to campaign with Brown in her district this weekend.

Their positions on Israel have also become an issue in the race, especially considering previous statements and actions by Turner.

She has openly stated that she wanted to become part of “The Squad” on Capitol Hill, which especially since the recent conflict between Israel and Hamas in Gaza have been severely critical of Israel’s actions and called for the conditioning of U.S. aid.

Turner had previously expressed support for IfNotNow when the organization tweeted for Jews to stand by Palestinians to end what it called “apartheid” by Israel during the 11-day conflict in May.

According to the Democratic Majority for Israel (DMFI) PAC, Turner has also called for conditioning aid to Israel and led an unsuccessful effort to move the Democratic Party platform in an “anti-Israel direction.”

DMFI PAC has spent more than $1 million on ads and phone banking supporting Brown and opposing Turner during the cycle.

Mark Mellman, president and CEO of DMFI, said that he saw the race as critical—both from the perspective of getting a member of Congress in office that would help move the Biden-Harris agenda forward, as well as supporting the consensus pro-Israel positions of the party.

“Nina Turner has been incredibly divisive and incredibly hostile to the Biden-Harris ticket and to the Democratic Party over many years. So that’s problem No. 1,” said Mellman. “Problem No. 2 is that she is an anti-Israel leader, and that’s deeply problematic from my point of view.”

Mellman said that when Turner failed to move the party’s platform in what he considers an anti-Israel direction, she called support for Israel in the platform “a betrayal,” besides pointing to her record of calling Israel an apartheid state and favoring conditioning foreign aid, which he said was, in effect, cutting funds to Israel.

“I’m not sure how one looks at her and says anything other than she’s anti-Israel,” he said.

In contrast, Brown, who is also the chair of the Cuyahoga County Democratic Party, has openly stated her support for Israel as a close ally of the United States and that Israel had the right to protect itself.”

‘Brown has been very clear on her support for Israel’

Brown has also traveled to Israel on a trip sponsored by AIPAC-affiliated American Israel Education Foundation, according to Jewish Insider.

In early July, the Jewish Democratic Council of America (JDCA) endorsed Brown, stating that her views on a range of issues best align with the organization, including her views on Israel.

“On Israel, Brown supports a two-state solution to the Israeli-Palestinian conflict and does not support conditioning of U.S. aid; she has publicly voiced her support for the 10-year, $38 billion U.S.-Israel Memorandum of Understanding (MOU), including at JDCA’s candidate forum. Brown supports President Biden’s efforts to reach a ‘longer and stronger’ nuclear agreement with Iran,” the organization said in a news release.

A number of Jewish Democratic members of Congress considered pro-Israel have endorsed Brown in the race, including Reps. Brad Schneider (D-Ill.), Josh Gottheimer (D-N.J.) and Ted Deutch (D-Fla.). Cuyahoga County executive Armond Budish, a Democrat who was the first Jewish speaker of the Ohio House of Representatives, has also endorsed Brown. 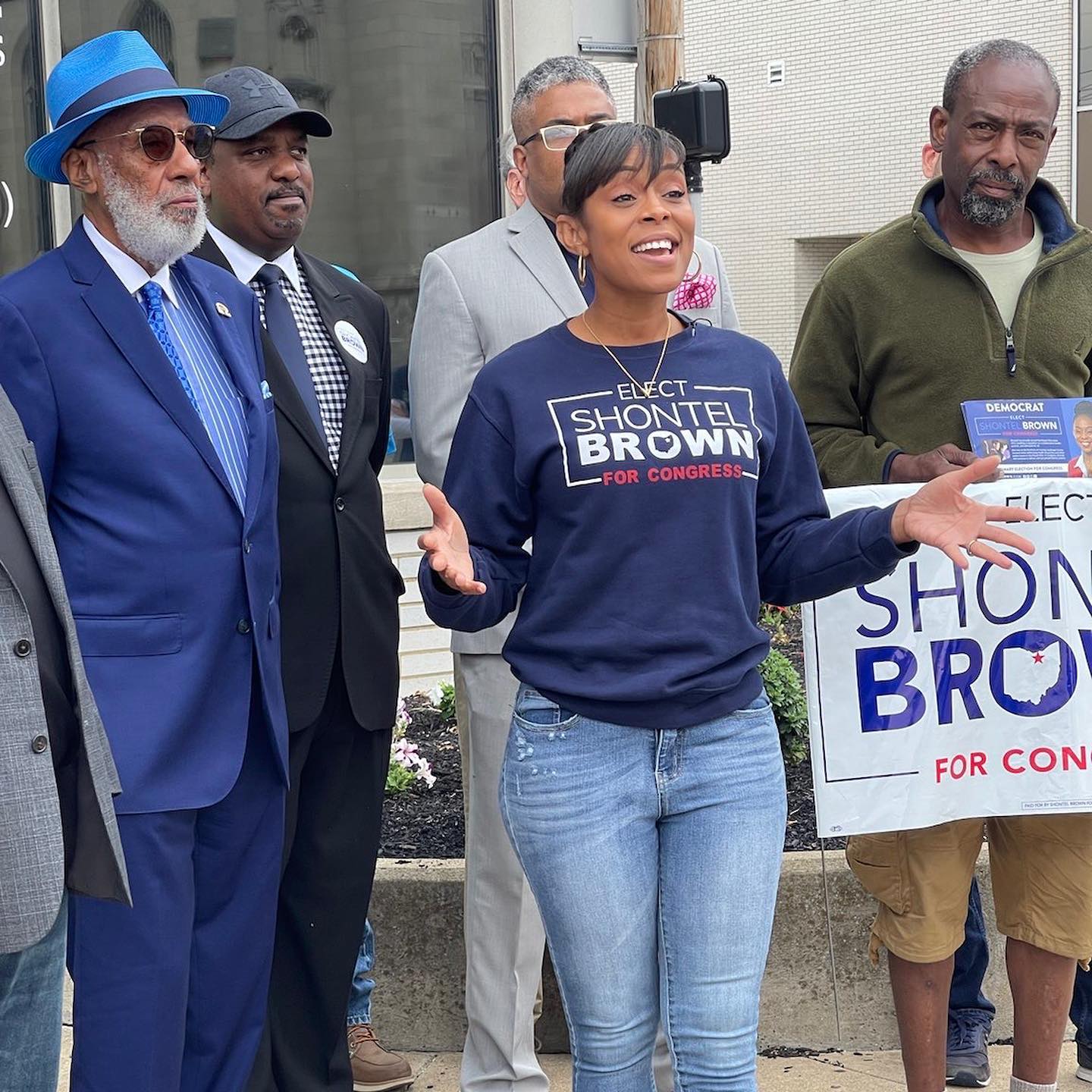 Pro-Israel America (PIA), including the organization’s affiliates PIA United and PIA Action Fund, have also been visibly endorsing and organizing in favor of Brown.

PIA’s executive director Jeff Mendelsohn said that the choice for pro-Israel voters is evident in the race.

“[Brown] was very clear with us and others in the pro-Israel community about her support for Israel. It was really based on her own deep convictions about Israel,” said Mendelsohn. “She had visited … and was deeply touched by the people and the history and the religious significance, for her personally, of Israel. And all of that from a policy perspective and beyond, translated into her commitment to support the U.S.-Israel relationship if she got elected. And that’s exactly the kind of candidate that we look to support.”

Mendelsohn said that members affiliated with his group have contributed approximately $800,000 to Brown’s campaign.

He also noted Turner’s alliance with Sanders, who is also helping the Turner campaign and has been a leading voice in the Senate in favor of conditioning aid to Israel.

“Without a doubt, [there is] a contingent in Congress that is vocal in its criticism of Israel. It has grown, but it hasn’t grown by leaps and bounds,” said Mendelsohn. “They’ve lost more races than they’ve won. And we and others—because of this issue and other issues—organized to elect candidates that reflect our values.”

The race appears to be tightening, and for the groups supporting Brown, perhaps peaking just in time.

The Mellman Group, the political consulting group Mellman is president and CEO of, conducted a poll of 400 likely voters in June that showed Turner leading with 50 percent and Brown with 26 percent of support.

A poll released on July 19 appeared to show that the gap had narrowed to Turner leading Brown by only 5 percent, with 41 percent to Brown’s 36 percent.

“There’s no question the race moved pretty dramatically,” said Mellman. “It’s a dramatic tightening. It still put Turner in the lead, but the momentum at this point is clearly on the side of Brown.”

If Brown wins, carried across the line by major pro-Israel and mainstream Democratic groups, it could encourage other successful challenges to members who are not considered pro-Israel.

Kondik said that Turner has turned out to be an excellent fundraiser, saying that it’s probably the result of her loyalty to Sanders, which allows her to reap the benefits of his loyal supporters.

While the candidates differ on their positions on Israel and how much of the pro-Israel support they’ve gotten, it remains unlikely that Israel would play a significant role in the race. What it could do is tip the balance.

Beigelman, who has spoken with both candidates, says he will take a wait-and-see approach.

“Certainly, I think there are concerns [within the Jewish community] around the Israel side of things but the community also has a lot of other issues. Israel’s the critical issue for us of course, [but also] community security, community safety,” he said, among other domestic issues the local agencies that serve both Jews and non-Jews care about.

“It’s going to be tight,” said Beigelman. “Our community is engaged because they know that people in communities that vote do get their policy issues looked at very seriously. And if anybody thinks that they shouldn’t be voting, they know that they better pick a candidate and vote. This will matter to our community probably for decades.”