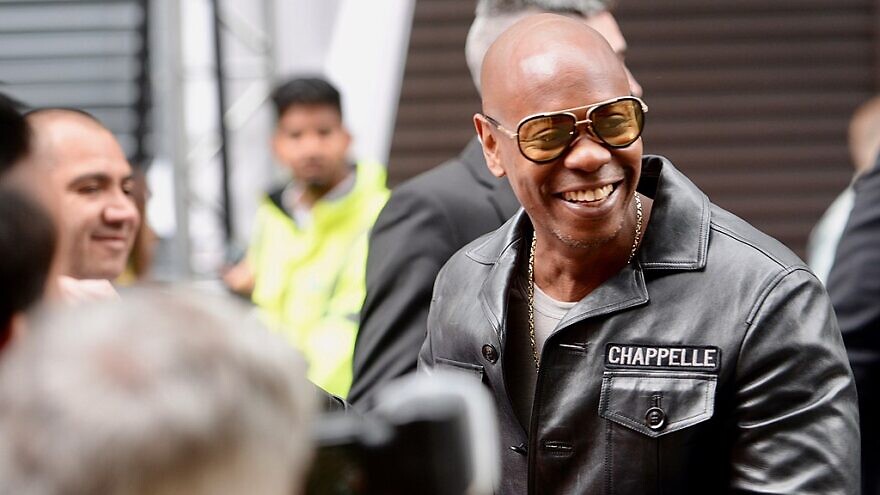 (November 13, 2022 / JNS) In his monologue, hosting “Saturday Night Live,” comedian Dave Chappelle defended basketball star Kyrie Irving, saying that the list of six things asked of the player in order to return to the court after tweeting a link to the antisemitic film “From Hebrews to Negroes” was too much.

“The list of demands to get back in their good graces got longer and longer and this is where I draw the line,” Chappelle said. “I know the Jewish people have been through terrible things all over the world, but … you can’t blame that on black Americans. You just, can’t, you know what I mean?”

The audience did not appear to know what he meant, and he acknowledged that only one person had clapped.

“A fair punishment would be he should just post a link to Schindler’s List and y’all write your own captions,” he said. “‘Cause Kyrie Irving’s black ass was nowhere near the Holocaust. In fact, he’s not even certain it existed.”

Chapelle began the monologue by taking out a piece of paper saying: “I denounce antisemitism in all its forms and I stand with my friends in the Jewish community.” He added, “And that, Kanye, is how you buy yourself some time.”

There are two words that should never be said in sequence, he said, and those words are “the” and “Jews,” because, he continued, he’s never heard anyone do good after that.

Chapelle downplayed Kanye West’s “death con 3″ threat, joking that he had been up all night worried about what Kanye would do to the Jews.

Sporting-goods giant Adidas had dropped West after he said the company could not drop him even if he said antisemitic things, said Chappelle.

“Ironically, Adidas was founded by Nazis, and they were offended,” he quipped. “I guess the student surpassed the teacher.”

He said there had been a breaking of showbusiness rules.

“If they’re black, then it’s a gang, if they’re Italian, it’s a mob, but if they’re Jews, it’s a coincidence and he should never speak about it,” he said. “Kanye got in so much trouble, Kyrie got in trouble.”