(October 26, 2021 / Jerusalem Center for Public Affairs) Iran’s Oct. 20 attack on the U.S. military base in Tanf, Syria, succeeded in surprising both the United States and Israel. There were no casualties, but the damage was apparently heavy.

Tanf base houses about 400 U.S. troops and civilians as well as Syrian opposition forces. It is located in Syrian territory on the border triangle with Jordan and Iraq. The Pentagon confirmed the strike and said that the United States reserves the right to respond at the time of its choice.

According to Syrian officials, this is the first time that this base, established to fight Islamic State, has been attacked by Iran or its proxies. The barrage was carried by pro-Iranian militias in the region, using five drones. The attack was highly coordinated, with three of the drones having been launched from Syria while the remaining two came from Iraq.

According to various assessments in the United States and Israel, the attack was an Iranian response to two raids last week on Iranian targets in Syria attributed to Israel. Israeli security officials estimate that the Islamic Revolutionary Guard Corps’ Quds Force under Brig. Gen. Esmail Ghaani is responsible for the attack.

The Iranian strike is an “escalation,” and the question is whether the Biden administration will contain the new development or signal its refusal to change the rules of the game that have been practiced so far. 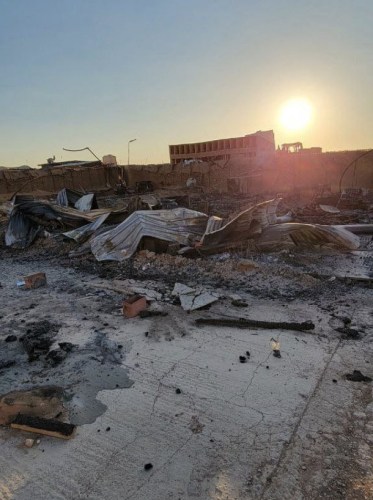 Analyst Charles Lister: “Judging from leaked images, the [Iranian] drone and rocket attack on Tanf (home to U.S. troops) was quite significant.” Source: Twitter.
Iran appears to be changing its strategy with regard to Israeli attacks on Iranian targets in Syria. The Iranians claim that the Israeli Air Force is using the Tanf base and that Israeli drones are occasionally launched at Iranian targets in Syria and Iraq. Iran, Syria and Russia oppose the presence of the Americans on Syrian territory, and the attack was intended to send messages to Israel and the United States and to expedite the American military withdrawal from Syria.

What messages does Iran want to convey?

1. Iran will no longer remain silent about Israeli airstrikes in Syria, and if the United States does not stop them, its base in Tanf will become the target of Iranian attacks.

2. Pro-Iranian militias in Syria and Iraq have the operational capability to attack with drones. The United States will have difficulty dealing with Iranian drone weapons, especially considering the apparent lack of U.S. air defense systems in the region.

3. A message to Israel: the bombardment of the Tanf base is only a prelude.

In a recent television interview, Syrian Foreign Minister Faisal al-Mekdad said that the U.S. military presence in Syria was “an act of occupation.” Because, he continued, “all free countries support the war against the occupation, we have many ways to convince the United States to withdraw from our country.”

The ball is now in the U.S. court: failure to respond militarily to the rocket and drone salvo against the Tanf base will be interpreted as weakness and will invite further Iranian attacks because Israel does not intend to stop airstrikes against Iranian military targets in Syria.

Following the attack on the Tanf base, Washington must carefully consider the policies it has adopted recently, which have eased the economic sanctions imposed on Syria.