(May 18, 2021 / JNS) Over the past decade, I have focused my activist efforts on the fight against anti-Semitism in the United States through strategic impact philanthropy. This approach to philanthropy requires not only financial giving, but also the investment of time, experience, vision and personal connections.

This has all been possible because America has afforded me, an immigrant from Israel, tremendous opportunities to succeed in business and build a wonderful life for my family. My business success allowed me to dedicate my resources to making an impact.

In recognition of all that America has given me, I have decided to expand my philanthropic focus to counter the unprecedented assault on America and its values.

Contributing to a strong, secure America benefits not only the American people, but also ensures the well-being of the Jewish people and other minorities in the U.S. and around the world.

Empowering a coalition to combat anti-Semitism 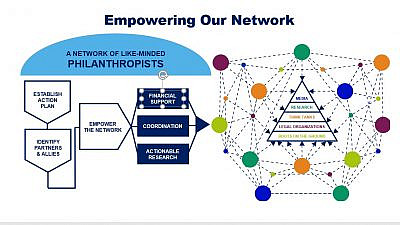 To fight Jew-hatred, I analyzed which organizations were the most effective in combating anti-Semitism and which philanthropists were supporting them. Then, I cultivated a network of like-minded donors, and together we selected organizations to support, based on their impact and willingness to collaborate with one another.

Knowing it takes a network to defeat a network, my fellow donors and I directed the organizations in our coalition to map out the network of adversaries propagating Jew-hatred and the various groups fighting anti-Semitism.

We, the connected donors, facilitated and provided funding for partnerships among the organizations. We ensured that they develop and share actionable research that would be actively utilized to go on the offensive.

As a result, a coalition of dozens of groups marginalized and discredited the anti-Semitic Boycott, Divestment and Sanctions (BDS) movement by exposing its affiliations with terrorism; how it promotes hate towards and violence against Jews; and its opposition to peace and normalization in the Middle East.

Broadening the battle to protect America and its values

Our American way of life and Western values are under attack by radical hate groups on both the left and the right, funded by wealthy ideologues. To counter them, we must draw upon the same successful methods I employed in the fight against Jew-hatred.

First, we must map out the fundamental American values that we are fighting for, including: democracy; freedom of speech, religion, press and assembly; education without indoctrination; rule of law; and capitalism.

Second, we need to network with like-minded philanthropists who are willing and able to provide a coalition of organizations with funding, direction informed by high-quality research and a network to promote collaboration.

Third, we need to identify the allies that excel at each one of these key standards and are willing to share information and build relationships with like-minded organizations. These allies include grassroots groups that are directly involved on the ground and with the public, think tanks, legal and media organizations and research groups.

The movements working to harm America are organized in a similar structure and empowered by a network of mega-donors. To defeat them, our network of donors and allies will have to identify the opposing groups’ agendas, objectives, networks, funders and plans. We will then use this information to counter the opposing organizations in the environments in which they currently hold sway.

Partnering with the best in class

To start, we need to determine the most effective willing and able financial partners and organizations with which to work. We must evaluate the organization to ensure that it is fully committed to strengthening and protecting American values and freedoms. An organization should have a clear definition of what these values are, and must accurately recognize the threat that our enemies pose to America and the American way of life.

It is then critical to evaluate the organization’s track record of success. One marker of long-term success is the ability to build synergies. It is necessary to select groups that habitually and naturally collaborate with others and complement one another’s distinctive contributions.

My successful track record in fighting anti-Semitism, forged by more than a decade of adversity and experience in the field, provides a readily available template to developing a powerful network of like-minded organizations to safeguard a strong and secure America.

I call on fellow philanthropists who want to fight for America and the cherished values it represents to join us in taking this new, assertive approach of active strategic impact philanthropy, to combat the groups that seek to undermine America and all it stands for.

Adam Milstein is an Israeli-American philanthropreneur. He can be reached at adam@milsteinff.org, on Twitter @AdamMilstein and on Facebook www.facebook.com/AdamMilsteinCP.