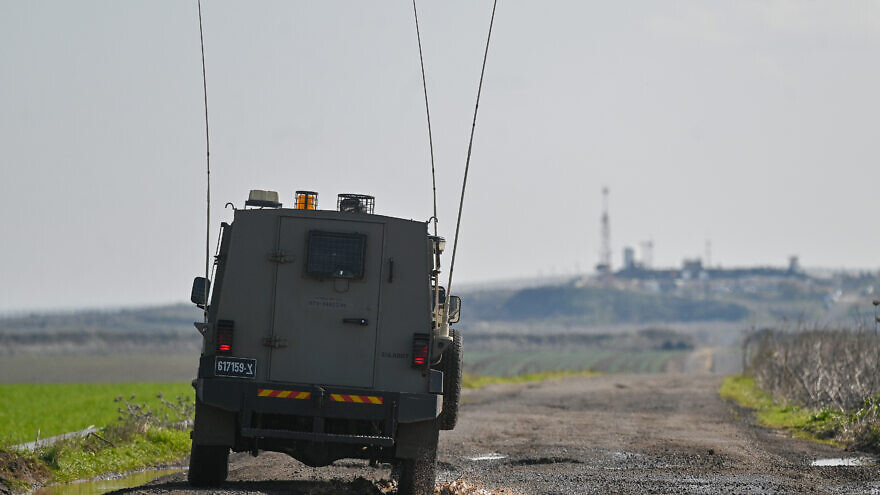 Israeli soldiers patrol on the border with Syria in the Golan on Jan. 25, 2022. Photo by Michael Giladi/Flash90.
Spread the word.
Help JNS grow!
Share now:

(July 6, 2022 / JNS) A Syrian man was killed on Wednesday in a targeted Israeli strike west of the village of Hader near the border with Israel, according to Syrian state media.

Farid Fuad Mustafa was hit near his home by a guided missile launched from the direction of the Israeli Golan Heights, according to the Syrian Arab News Agency (SANA).

According to Israel’s Channel 12, Mustafa was part of a group of Syrian and Hezbollah operatives that collected intelligence for the purpose of planning terror attacks against Israel. Other Israeli media reports claimed he was instrumental in helping Assad regime forces quell opposition unrest in southern Syria.

The Israel Defense Forces did not comment on the reports.

Also on Wednesday, the IDF revealed that in addition to the three Hezbollah UAVs shot down on Saturday, a fourth Hezbollah UAV was also shot down, over Lebanese waters, on June 29.

The drone was shot down “at a significant distance from the maritime border,” the IDF said in a statement. Like the three other downed drones, this UAV, too, “did not pose a threat or danger,” according to the IDF.