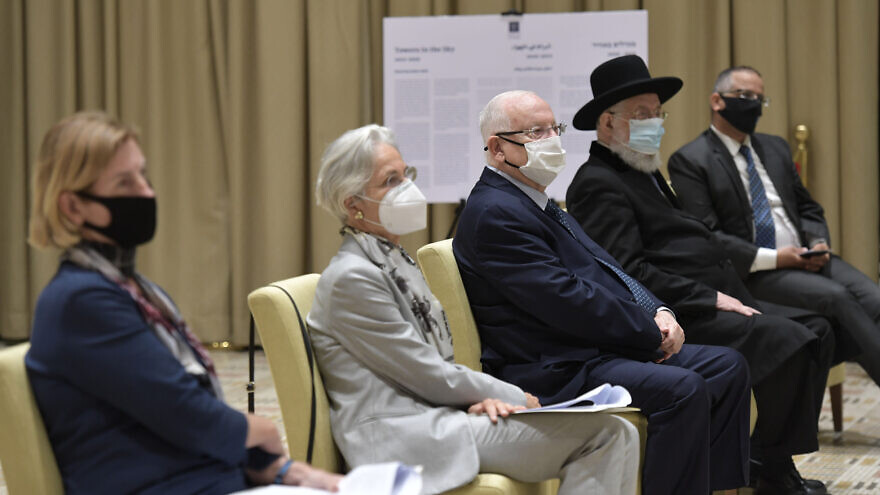 (November 10, 2020 / JNS) Israeli President Reuven Rivlin said on Monday that while anti-Semitism was a more difficult virus to deal with than COVID-19, a vaccine must be found for it.

Speaking at an event at the President’s Residence in Jerusalem marking 82 years since the Kristallnacht pogrom on Nov. 9-10, 1938, Rivlin said that anti-Semitism “changes shape, takes cover and threatens to break out through any crack.”

Nevertheless, he stated, “there must be a vaccine for it, too. Education, explanation, learning and taking responsibility—we, the leaders of the world, bear the responsibility for working in our social laboratories to mount a determined and uncompromising attack on any expressions of anti-Semitism, racism and xenophobia.”

Steinmeier noted that the November pogroms had not marked the beginning of the persecution of Germany’s Jews, but was rather “a nauseating outburst of violence following on from many years of discrimination, harassment and hostility. They foreshadowed the unspeakable crimes of the Shoah committed by my compatriots a few years later.”

The German president pledged to fight anti-Semitism, protect Jewish life and stand with Israel, saying he was “humbled” by the strong ties Israel and Germany had forged.

“The miracle of our shared German-Israeli friendship will continue to flourish if we stand together as we remember the lessons of the past. Remembrance carries the seeds of hope for a better future. Yes: We can find tikvah [‘hope’], even when we remember the dark nights and days of November 1938.”

“I am ashamed that only a heavy wooden door prevented a deadly attack on the synagogue in Halle on Yom Kippur last year.”

President Van der Bellen called Kristallnacht “the first cruel climax of the growing anti-Jewish violence of National Socialism. The racist ideology of the Nazis reached a new, terrifying intensity. And it rendered clear, in the most surreal and heartbreaking way, the degree to which Jewish Austrians, our fellow citizens, had been robbed of their most basic civil rights and freedoms.”

In Vienna alone, he said, 42 synagogues were burnt down or destroyed in about 24 hours.

“Thousands of shops and flats were looted. Over 6,500 Jewish Austrians were incarcerated, 4,000 of them sent to Dachau concentration camp. Austrians are remembering these crimes today in remorse and shame,” he said. “We, who were born after the Shoah, confess: Austria shares responsibility for the Shoah. Many Austrians, too many, were among the perpetrators.”

Van der Bellen emphasized that “acknowledging responsibility means, above all, to decidedly and courageously prevent any form of racism, discrimination and anti-Semitism—wherever we encounter it. This is a matter of great personal importance to me. It is our duty, our wish and intention to not only protect Jewish communities but to ensure that Jewish life can thrive again—be it in Europe, Israel or elsewhere.”