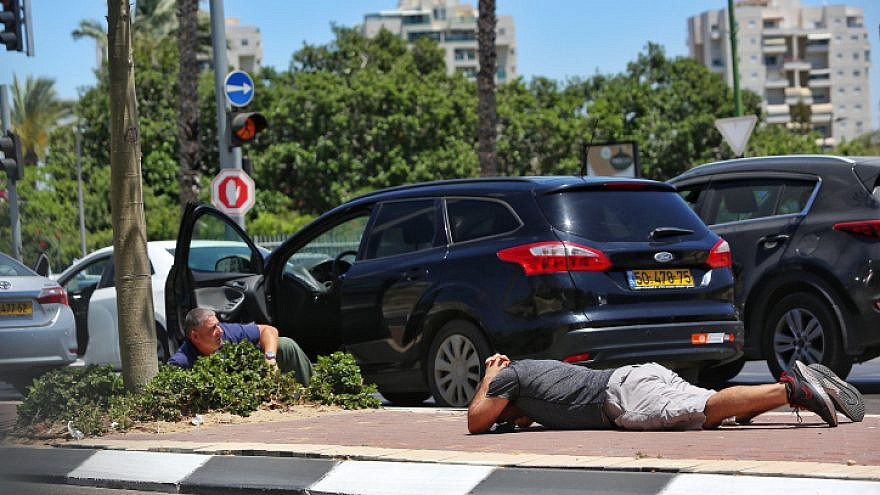 (May 20, 2021 / JNS) Heavy rocket fire from the Gaza Strip triggered sirens in Beersheva, Ashkelon and Western Negev communities on Thursday, day 11 of the current round of fighting between Israel and terrorist groups in the Gaza Strip. There were no reports of injuries or damage.

An Israeli soldier sustained light injuries earlier in the day when an Israeli military bus was struck by an anti-tank missile in Kibbutz Zikim near the Gaza border, according to the Israeli Defense Forces. The soldier, who was standing near the empty bus, was apparently hit by shrapnel.

Israeli forces continued to strike Hamas targets well into the afternoon, including rocket-launchers, one of the terror group’s operational headquarters and two weapons depots. According to the IDF, the depots were located in the homes of Hamas members.

The missiles in one of the launchers destroyed by Israeli warplanes had been armed, causing secondary explosions after the launcher was hit, according to the IDF.

The IDF also continued its attacks on Hamas’s extensive tunnel network, known as the “Metro,” destroying a tunnel segment in Beit Hanoun and two underground rocket sites that according to the military had been the source of barrages launched at Tel Aviv in recent days. In all, the IDF has attacked more than 1,000 military targets throughout Gaza.

Since the start of the IDF’s “Operation Guardian of the Walls” on May 10, Hamas and Palestinian Islamic Jihad have fired more than 4,000 rockets at Israel. Nearly a quarter failed to cross the border, coming down inside Gaza, causing both civilian deaths and material damage.

Israel’s Iron Dome missile-defense system continues to maintain an interception rate of approximately 90 percent, according to the military.

Earlier on Wednesday, U.S. President Joe Biden told Israeli Prime Minister Benjamin Netanyahu in the fourth conversation between the two leaders this week that he expected to see a “significant de-escalation” in hostilities.