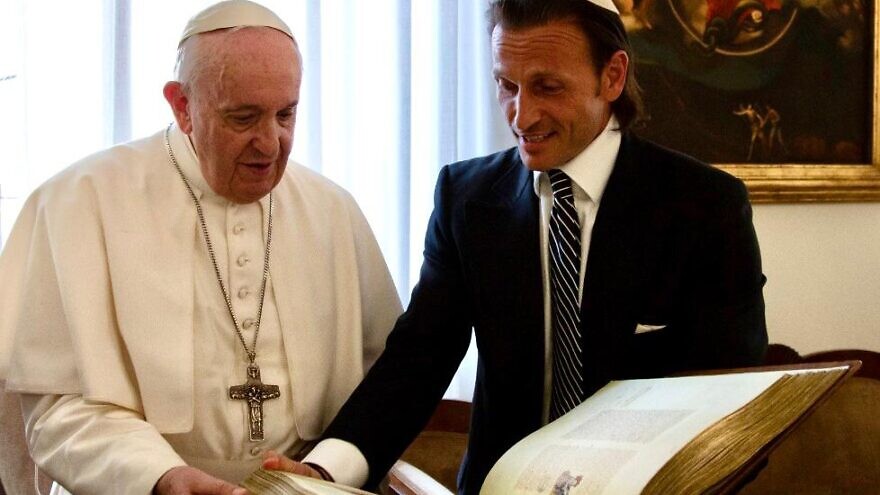 David Hatchwell presents Pope Francis with a facsimile of the Alba Bible, the the first translation of Hebrew into Old Castilian and one of the most significant examples of Sephardic art. The objective of the Alba Bible was to teach the clergy the Jewish heritage of Christianity and build bridges between cultures. Photo: Courtesy.
October 1, 2020
The main headlines

news
Newsom vetoes California ethnic-studies bill requiring anti-Israel curriculum
Jackson RichmanJNS
The governor wrote that an early version of the curriculum “was insufficiently balanced and inclusive, and needed to be substantially amended,” and that the latest proposal “still needs revision.”

newsFollowing first debate, Jewish groups slam Trump’s responses on white supremacism
“Are you willing tonight to condemn white supremacists and militia groups, and to say that they need to stand down and not add to the violence at a number of these cities, as we saw in Kenosha and as we’ve seen in Portland?” asked moderator and Fox News anchor Chris Wallace.

newsBiden compares Trump to Nazi propaganda chief Goebbels
Jackson Richman
“The president is not Hitler. Joe Biden is not Castro,” said Rabbi Abraham Cooper of the Simon Wiesenthal Center, adding that the comparison “degrades the memory of the Shoah.”
ColumnTrump, anti-Semitic? This is madness
Rabbi Yaakov Menken
The problem is the president’s deeds are not permitted to speak for themselves, and his statements are misconstrued for partisan purposes.
feature
Palestinians continue to incite terrorism and violence in school curriculum, says watchdog group
Israel KasnettJNS

brief
Report: US considers new sanctions on Iran’s financial sector
JNS
It would effectively cut it off from the worldwide financial system with an exception for humanitarian purposes.
briefSecond tanker of Iranian fuel reaches Venezuelan waters
It’s part of a group of deliveries of 820,000 barrels of gasoline and other fuels to the once oil-rich nation.
newsIran: ‘We will help any country fighting the Zionist regime and the United States’
Michael Segall JCPA
Tehran is seeking to survive the window of time before the U.S. election without giving President Donald Trump the option of taking actions against it to score points during the race.

news
Saudi Arabia uncovers terror cell trained in Iran by Revolutionary Guards
Michael SegallJCPA
The Abraham Accords, signed by the UAE and Bahrain with Israel—and encouraged by Saudi Arabia—sharpened the disputes between Tehran and Riyadh over regional hegemony.

brief
BDS co-founder warns First Abu Dhabi Bank against doing business with Israel
MEMRI
Omar Barghouthi threatens boycotts against “every company and every establishment that gets involved in implementing the agreements of shame and betrayal of the Palestinian cause.”

brief
Shin Bet to continue COVID phone surveillance for additional 21 days
Ariel Kahana and JNS Staff
Knesset Ministerial Committee on Intelligence Services discusses but fails to vote on whether to mandate that the public use an alternative Health Ministry phone-tracking app.

brief
Petition calls for action against anti-Semitism in California school district
JNS
“Children have found swastikas on their lockers, on their books, their cars in the parking lots,” said Rabbi Stacy Friedman. “These are things we’ve been hearing about the past few years.”
feature
‘Israel has the makings of a cyber superpower’
Yoav LimorIsrael Hayom

newsIsraeli Prime Minister Benjamin Netanyahu’s speech to UN General Assembly
“Here is where the next explosion could take place. This is the Beirut neighborhood of Janah. It’s right next to the international airport. And here, Hezbollah is keeping a secret arms depot.”
briefIDF reveals coordinates of ‘Hezbollah missile depots’ in Beirut
Lilach Shoval Israel Hayom
“It’s time for the world to stand up against the use of human shields by Hezbollah,” says the Israeli military.
briefHezbollah leader accuses Netanyahu of ‘inciting’ against terrorist group
Daniel Siryoti Israel Hayom
Hassan Nasrallah says Israel’s prime minister lied to the United Nations when he exposed missile stockpiles the Iranian proxy has stashed in residential areas in Beirut.

(July 29, 2020 / )On July 31, 1492, formal Jewish life in Spain came to end with the Alhambra Decree, the Edict of Expulsion from the Crowns of Castile and Aragon and its territories and possessions. Thus, almost two millennia of open Jewish presence in Spain was ended, in an attempt to disconnect the Hispanic and Jewish peoples, which had become intertwined and enmeshed over centuries.

This disconnection only formally ended when the decree was voided by the Spanish government in 1968 and open Jewish life returned to Spain. Other Jews, fleeing Europe, escaped to Latin America, and many Hispanic people have begun to learn of their hitherto hidden Jewish ancestry.

While few people understand the deep and shared roots of the Hispanic and Jewish peoples, recent academic genetic research reveals that more than 200 million Hispanic people have significant Jewish ancestry, and well more than two-thirds of all Jews around the world have ancestors who spent some time in the Iberian Peninsula.

These are just some of the extraordinary connecting points between the Hispanic and Jewish peoples that are starting to become better known, thanks to new research. Here is a unique shared heritage, which if better understood, can become a foundation for greater tolerance and understanding in an increasingly divided and estranged global society.

The Hispanic Jewish Foundation, formed in 2015, is a means to create greater awareness of these ties that bind us, and how to understand the civilization, culture and identity that unites the Hispanic and Jewish peoples and how they have contributed so much to humanity’s progress and development.

To this end, we are building a unique and expansive Hispanic Jewish Museum in the next few years, which will serve as a vital intersection between the Hispanic and Jewish world that has existed side by side, with each group significantly enriching and contributing to the culture and heritage of the other, for two millennia.

Using extremely innovative and interactive techniques and exhibitions, the museum will instill in its visitors a strong empathy with the culture, journey and values of the Jewish people, the progenitors of Judeo-Christian civilization and the three monotheistic religions.

Intertwining cutting-edge technology with exceptional and unique historic artifacts, we will demonstrate why Sepharad, the long Jewish presence in Spain, left indelible marks, treatises and events that still define much of the wider Hispanic and Jewish worlds up until the present day.

Through navigating the more than 3,500 square meters (37,674 square feet) on which the museum will sit, visitors will appreciate the 4,000-year journey of the Jewish people, a nation dispersed to the four corners of the earth before returning to its ancestral and indigenous homeland, enriching each people and culture with which it came into contact, through its faith, values and traditions. These values have helped form the kernel of democracy, liberty and society, and much of humanity’s core principles and beliefs.

The museum will also describe the centrality of the land of Israel to the Jewish people, where an oppressed and scattered people flew in the face of history to reinvest their language, culture and national sovereignty in the place where their peoplehood was birthed and evolved.

It will teach its visitors about the State of Israel’s concerted commitment to peace, “Tikkun Olam” (repairing the world), utilizing innovation, knowledge and technology to make the world a better place for the betterment of all mankind, regardless of gender, nationality or religion.

The museum, which will also be online for virtual visitors, will be a voyage through time, experience and spirit, illustrating the numerous connecting points between Hispanic and Jewish people, culture and history.

Visitors will learn about their possible connection to both peoples through distinctive genetic, genealogical and historic tools.

The museum will become a central point of pilgrimage for anyone, from across the world, who wants to understand the foundations and collaborations of the Jewish and Hispanic peoples and culture, and their consequent effect on history and on the world in which we live.

As the modern world faces the unprecedented challenges a global pandemic that is entrenching division and schisms within and between societies, we need a new global initiative that amply illustrates that two peoples who many assume bear little relation to each other, share a unique path, and together can embrace a shared ancestry in a spirit of unity and solidarity.

The Hispanic Jewish Foundation is not looking to undo the past, right any wrongs or redress any past injustices. It is forward-looking, but firmly planted in our shared history and ancestry to seek answers for present and future challenges.

Both the Hispanic and Jewish traditions are very tactile and experiential. We are taught to learn and feel the past, be proud of where we came from and use it as a lesson for today.

The Hispanic Jewish Museum, to be built in Madrid, in the heart of the modern capital of Spain, will be a major symbol and acknowledgement that, after 528 years, our peoples will have the honor to be witnesses to a re-connection that will form a solid basis for an alliance for progress, understanding and tolerance.

David Hatchwell is the President of the Fundación HispanoJudía, the leading organization establishing bridges between the Spanish-speaking and the Jewish worlds.