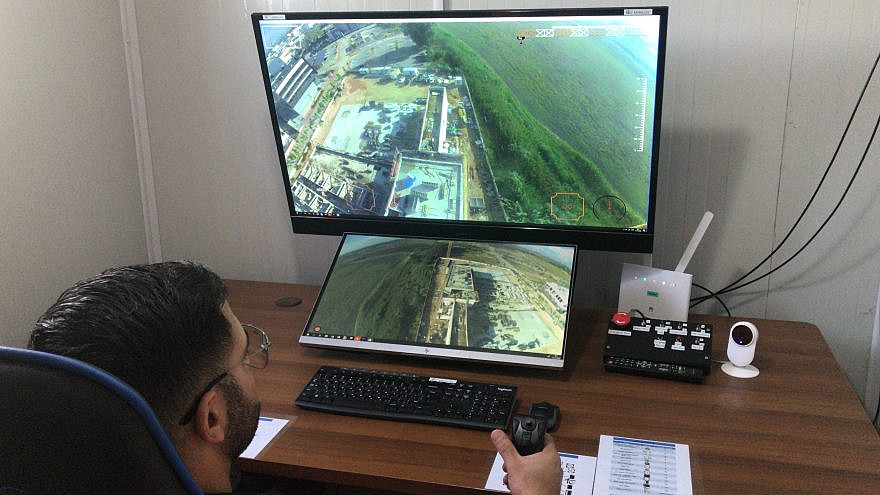 Technology transforms a tower crane operator’s booth into a cockpit that resembles an aircraft cabin and is active at a construction site in Israel. Credit: UltraWis.
Republish this article
769 WORDS
Spread the word.
Help JNS grow!
Share now:

(December 23, 2020 / JNS) When Lior Avitan glanced up at a tower construction crane as he was in between classes while doing an MBA business degree at the University of Haifa, a new realization dawned on him.

Avitan, today the co-founder and CEO of UltraWis, had spent 16 years working at Elbit Systems, a leading Israeli defense company, including years at the Aerospace Division, where he led the technological development of the Brightnite pilot night vision system. Brightnite is in use in air forces around the world.

“I saw a person sitting up in the cabin operating the crane all day, and I saw that all sorts of things could be done differently, more safely and more efficiently,” he told JNS. “I told myself that the technology we have at Brightnite can be converted to cranes. That a person does not have to sit up there all day—we have sensors that enable ground control.”

Thus, the idea for UltraWis was born.

Together with his colleague, Erez Gernitzky, who was responsible for image processing and algorithms at Brightnite, Avitan proposed his ideas to Elbit, which ended up licensing him with 14 patents and investing in the new startup.

UltraWis was developed through Elbit’s deep-tech incubator, called Incubit, which teamed up with the Israel Innovation Authority to make a seed investment of $1 million.

The company officially launched in 2019.

These days, it offers a solution that transforms the tower crane operator’s booth into a cockpit that resembles an aircraft cabin and is active at a construction site in Israel.

The system enables control from the ground, which UltraWis says improves safety and allows for automatic management of the construction site. UltraWis uses technologies imported directly from the military world, including image processing, 3D-modeling and augmented reality.

The company held a trial on a tower crane that is operated by TOP Engineering, an Israeli representative of the German crane giant Liebherr, which supplies 30 percent of the world’s cranes.

‘Similar to what pilots or drone operators have’

Avitan said he decided to give up a satisfying job in a global company for a new adventure in an unknown field.

He traveled to Beersheva in southern Israel, where he began recruiting employees for the new company. Instead of sending operators to climb 100 meters into crane booths, operators using UltraWis technology sit in a ground cabin, watching screens that deliver 2D and 3D graphics superimposed over live video feeds.

They point to a location on the site and the crane travels there automatically, calculating a safe route using Artificial Intelligence—“a Waze for cranes,” said Avitan. Operators can take over at any time.

“We wanted to make crane cockpits technologically very similar to what pilots or drone operators have,” he said. “Operators can see the entire site from above. We can, using AI, tell them who entered the construction site and where they went. The system can sound an alert if workers entered the site without a helmet.”

It takes about 10 hours to train operators to use the system, and the fact that it’s on the ground means that the role of tower crane operator can be offered to a broader workforce, including to more women.

“Our motivation was to meet the need in the market for new technology. It exists in Elbit, where it is used in difficult military environments. The construction field is also a highly challenging, all-weather environment,” said Avitan.

In Israel, between 40 and 50 construction workers are tragically killed every year, and the industry suffers from a poor safety record. Such technology greatly reduces risks of accidents linked to tower cranes, he added.

In December 2019, the company was granted $900,000 from the Manof Fund, a social development fund run by the Israel National Insurance Institute, which aims to promote activities that reduce workplace accidents.

The system installs two cameras on tower cranes that feed the ground cabin with data. The AI system analyzes activity on the ground and controls the routes of the tower crane’s movements as it moves various payloads from point to point.

The transfer of this military technology to the civilian market could also expand to the areas of heavy industry, seaports and trains, he said. “Our sensors can be added on to most platforms in these fields. They can be used both as cameras and ways to analyze what is taking place on the ground.”

The next stage, said Avitan, is reaching a higher degree of automation and developing an additional “3D interface to enhance the user experience. We are also improving the way it identifies the payloads, and we want to make the crane’s routes even more precise.”