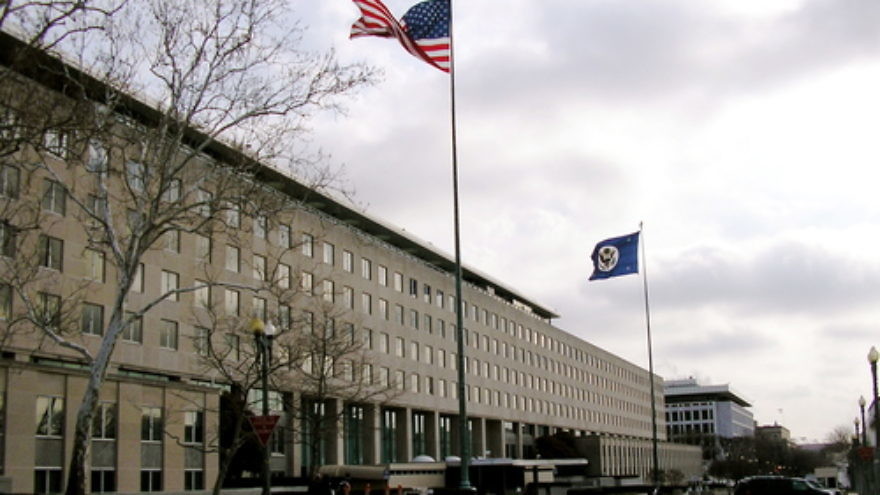 The U.S. State Department has been so pro-Palestinian for so long that it might seem startling to suggest that there is a current of anti-Palestinian racism at Foggy Bottom. But just consider:

The official Palestinian Authority (PA) daily newspaper, Al-Hayat Al-Jadida, published an article on Jan. 21 suggesting that the U.S. carried out the 9/11 attacks in order to have a pretext for causing “creative anarchy” in the Arab world.

The article, by regular columnist Dr. Osama Al-Fara, claimed that there are “many questions” about 9/11 “that place the U.S. in the defendant’s seat, as was exposed later in a series of facts and reports.” As part of a secret plot to “distance Arab states from each other,” the U.S. “created an imaginary enemy called ‘terror’” and “supervised” the emergence of Islamic State, Al-Fara claimed.

Thanks to Palestinian Media Watch, we know that the official PA news media frequently publish such screeds. But if you ask anybody in the State Department about these kinds of Palestinian conspiracy theories, they will invariably say that we should not take it seriously, because “that’s just how the Palestinians talk” or “yes, that’s what Palestinians believe, it’s no big deal.”

Such rationalizations of Palestinian extremism can only be described as “the soft bigotry of low expectations,” (a phrase coined by former presidential speechwriter Michael Gerson. They’re saying that the Palestinians are inherently incapable of being rational and reasonable. If that’s not racism, what is?

We recently had fresh and blatant evidence that such attitudes are rife in the State Department. In the latest batch of Hillary Clinton’s emails, there was a remarkable policy proposal from Thomas Pickering to the then-secretary of state.

In his day, Pickering was not some ordinary policy wonk. He was Mr. State Department. He was an aide to secretaries of state William Rogers and Henry Kissinger; assistant secretary of state for environmental issues; ambassador to the United Nations and various countries (including Russia, Jordan, and Israel); and, most recently, under secretary of state for political affairs, the number-three position at the State Department.

In 2011, Pickering was one of several ex-State Department officials who continued to provide Clinton with policy advice. In a Dec. 18 email, he proposed that the U.S. should persuade NGOs to stir up Palestinian demonstrations against Israel, in order to pressure the Israelis to make more concessions.

Mrs. Clinton was so interested that she asked one of her assistants to print out Pickering’s email for her.

The racism part comes in with Pickering’s explanation as to why he prefers that the protesters be women. If Palestinian men take part, he explained, they might turn violent and then the Israeli soldiers would respond with force, which would spoil Pickering’s whole plan of garnering world sympathy for the Palestinian cause.

The “culture” among “Palestinian males” is “to use force.” So says one of the most prominent and longest-serving officials in the U.S. State Department. Imagine if an Israeli official or an American Jewish leader asserted that Palestinian culture is inherently violent. Surely he would be denounced as a racist, ostracized from polite society, and forced to publicly apologize.

Many State Department officials, like many advocates of the Palestinian cause, look down their noses at the Palestinians (and other Arabs). They consider them savages and thugs. They would never invite Palestinians to their cocktail parties, and they sure don’t want their daughters marrying them.

They may champion the Palestinian cause, but they do not love Palestinians. In fact, they don’t even like them very much. Rather, they’re scared of them. They’re afraid of Palestinian terrorists hijacking their airplanes, or machine-gunning their children’s school buses, or pressuring Arab regimes to cut off oil shipments to the U.S.

That’s why Pickering and other State Department types try to bully Israel into allowing the creation of a Palestinian state—in the desperate hope that doing so will get the Palestinians to leave us alone. And, incredibly, they have the gall to accuse Israel of being “racist” for not going along.