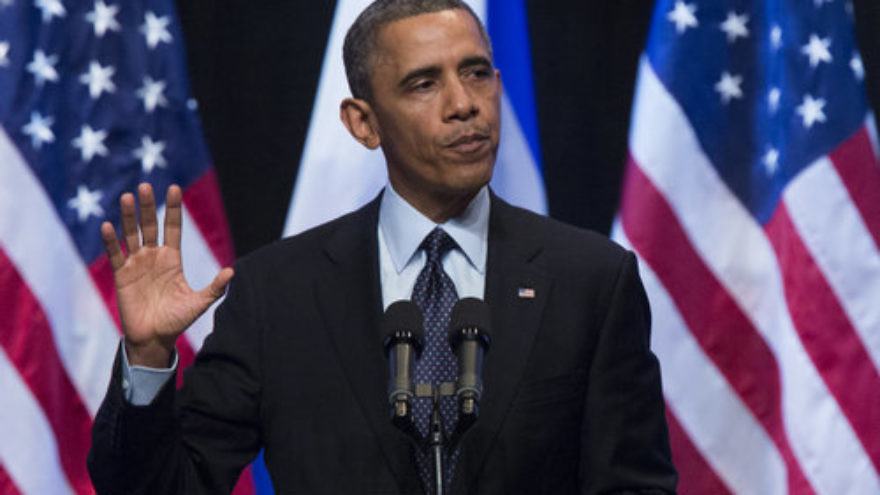 WASHINGTON – Major Jewish organizations are united in their opposition to President Barack Obama’s reported plan for a “December surprise” to undercut Israel and bolster the campaign for a Palestinian state.

Obama is considering six possible steps concerning Israel that he would take in December before the inauguration of the next president, Jonathan Schanzer, Ph.D., vice president of the Washington think tank Foundation for Defense of Democracies, told JNS.org.

One option is unilateral U.S. recognition of the Palestinian Authority as a sovereign “state of Palestine.” Such a step would be “harmful to the prospects of achieving peace,” said Nathan Diament, executive director of the Orthodox Union’s Advocacy Center. “Such a unilateral action would reinforce the notion to the Palestinians that they can achieve their goals by some means other than direct negotiations with the government of Israel.”

Attempting to “impose peace” will never work, said Betty Ehrenberg, executive director of the World Jewish Congress-North America. She told JNS.org the only way to achieve “a genuine and lasting peace” is if both sides demonstrate “a desire for peace. And, so far, Israel is the only party that has done so…The Palestinian Authority has refused time and again to return to the negotiating table.”

Allowing such U.N. action would burden future U.S. presidents with “the enormous negative fallout,” according to Cliff Smith, Washington project director of the Middle East Forum. The fallout could include a Palestinian state becoming “a virtually ungovernable hot bed of terrorism that would threaten not just Israel, but the interests of the United States and our allies,” Smith told JNS.org.

Congressman hits Obama’s ‘chutzpah’
Members of Congress are hoping to head off a December surprise. Representatives Edward Royce (R-Calif.) and Elliot Engel (D-NY), leaders of the House Foreign Affairs Committee, recently authored House Resolution 165, which states the U.S. “should continue to oppose and veto United Nations Security Council resolutions that seek to impose solutions to final status issues, or are one-sided and anti-Israel.”

A similar resolution, introduced earlier this year by Reps. Doug Lamborn (R-Colo.) and Gwen Graham (D-Fla.), is still pending but so far has 25 co-sponsors.

Lamborn told JNS.org that it would be “chutzpah” for Obama to undertake a major policy step regarding Israel in the last days of his presidency. Lamborn warned that a U.N. or U.S. declaration along the lines contemplated “would virtually criminalize settlements, open up such activity to prosecution by the International Criminal Court, and give credence to the boycott, divestment and sanctions (BDS) movement.”

Between the two resolutions, small differences are being ironed out, and a single resolution is expected to be voted on in the near future.

In recent months, Obama has heard from a majority of congress members who signed group letters urging U.S. opposition to U.N. actions against Israel.

American Israel Public Affairs Committee (AIPAC) spokesman Marshall Wittman told JNS.org his organization supports the Royce-Engel resolution and “has been supportive of the efforts of the 88 senators and 394 house members who have signed letters to the president urging him to veto a one-sided U.N. resolution.”

Obama’s fourth option would be to act directly, rather than through the U.N., by delivering a Rose Garden speech outlining his vision of the parameters of an Israeli-Palestinian agreement, Schanzer said.

American Jewish Committee spokesman Kenneth Bandler warned against that approach. “More speeches or U.N. resolutions cannot substitute for negotiating the details of the permanent agreement,” he told JNS.org. The U.S. should “confront the Palestinian leadership and its Arab allies, who are intent on misusing international forums to rewrite long established history by negating any Jewish links to the land.”

Penalties for visiting the Western Wall
The last two options on Obama’s desk involve U.S. action against the settlements. That could mean stripping American Jewish charities of their tax-exempt status if they assist settlements, or issuing an executive order to penalize the settlements or their American supporters.

These options are the least like to be implemented, Schanzer said.

Part of the problem for the administration is it would involve defining anything beyond the 1967 lines as an “illegal settlement,” which would include large parts of Jerusalem.

The result would be that a Jewish organization might trigger U.S. sanctions merely by sending a tour group to visit the Western Wall, for example. Major American Jewish organizations, like the Jewish National Fund and American Friends of Hebrew University, would be affected. That would create an unprecedented clash between American Jewry and the outgoing president that would spill over into the Jewish community’s relationship with the next president.

Critics say an Obama “December surprise” against Israel is likely to end as badly as the “December surprise” of 1988. During the weeks between former President Ronald Reagan’s departure and George H.W. Bush’s inauguration, the U.S. recognized the Palestine Liberation Organization (PLO), claiming Yasser Arafat had sincerely accepted Israel and forsaken terrorism.

Ambassador Yoram Ettinger, former minister for congressional affairs at Israel’s embassy in Washington from 1989 to 1992, told JNS.org that the underlying flaw in U.S. policy toward Arafat was “that the State Department decided in advance that Israel was the bad guy and that the Palestinians wanted peace, so the U.S. refused to accept the reality that Arafat was still sponsoring the Intifada and other terrorism.” In May 1990, evidence of Arafat’s continued involvement in terrorism had become so overwhelming that President Bush had no choice but to end U.S. contact with the PLO.

“The same thing is bound to happen if President Obama pulls some kind of ‘December surprise’ this time,” Ettinger said. “Pressuring Israel and appeasement of terrorists never results in peace. That policy backfires every time, and it will backfire on Obama, too.”