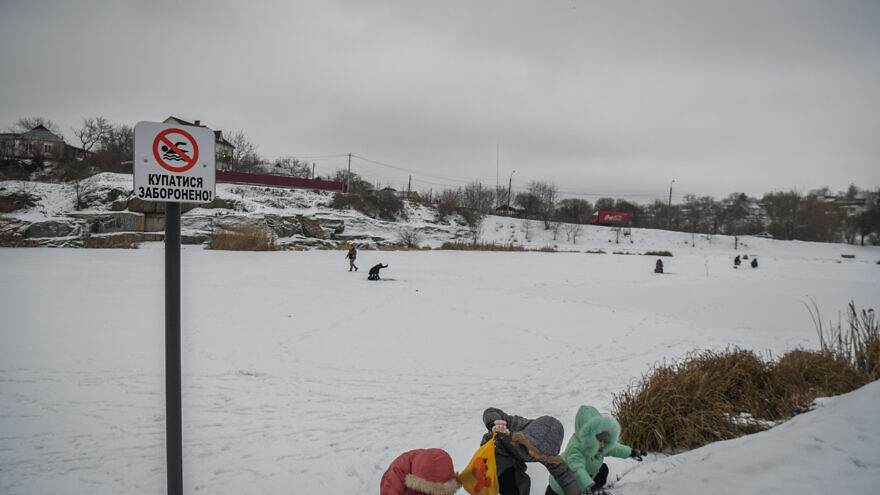 Jewish adults and children at a frozen lake in the city of Uman, in central Ukraine, on Jan. 26, 2022. Photo by Yossi Zeliger/Flash90.
Republish this article
635 WORDS
Spread the word.
Help JNS grow!
Share now:

(February 22, 2022 / JNS) Russian President Vladimir Putin’s recognition on Feb. 21 of two “breakaway” states in eastern Ukraine and his subsequent dispatch of “peacekeepers” there—considered by Western nations to be an official invasion of the country—has left its citizens and particularly the Jewish communities on edge. Throughout Ukraine, Jewish leaders are watching closely, and many have made contingency plans in the event the situation worsens.

He stated that Russia’s move is an “act of war against the sovereignty of Ukraine,” and he and other communities are keeping a close watch on events, as “it’s a developing situation.”

An estimated 200,000 Jews are spread throughout a number of communities in the country.

Bleich said that in the meantime, the Jewish communities near Lugansk and Donetsk “will shelter in place or evacuate.”

The Jewish communities of Kharkiv and Odessa “need to make a decision of what they are doing,” he said, but are likely waiting to see how events unfold.

Bleich said that as far as Kyiv is concerned, “at this point, no one thinks there will be a ground incursion, but there is a danger of bombings and missiles being shot at Kyiv, especially trying to get to certain buildings in Kyiv such as the ministry of defense, the airports and other strategic areas.”

These targets, he said, have put Kyiv “in the line of fire.”

“Most people are sheltering in place,” he said. “Some communities have made contingency plans for temporary evacuation. However, it all depends on the situation.”

Israel’s Foreign Minister Yair Lapid spoke on Tuesday with Israeli Ambassador to Ukraine Michael Brodsky and the Ukraine embassy staff who had been instructed to leave Kyiv and move to a temporary consular office in Lviv.

According to the ministry’s Twitter account, “Lapid emphasized that protecting the lives of Israel’s emissaries, Israeli citizens situated in Ukraine, and the large Jewish community in the country, is the State of Israel’s top priority.”

The ministry has made contingency plans to help evacuate Ukraine’s Jews, if necessary. Since the skies will likely be closed, Israel has arranged for a land evacuation through Ukraine’s neighbors including Poland, Hungary, Romania, Slovakia and Moldova.

The Foreign Ministry reiterated its call to all Israeli citizens to leave Ukraine immediately. 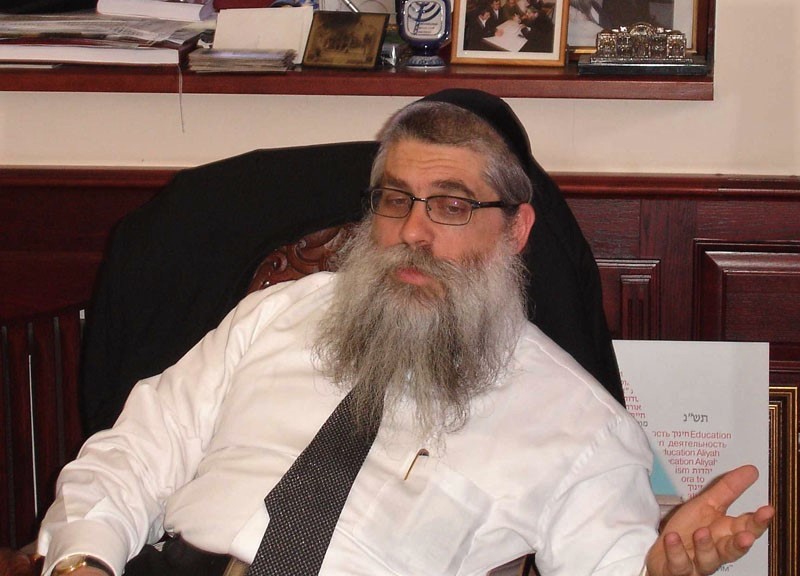 ‘We need a lot of heavenly help’

Rabbi Hillel Cohen, an active leader within Kyiv’s Jewish community and head of Hatzalah Ukraine, told JNS he is prepared for the worst-case scenario, but he hopes for the best.

He mirrored Bleich’s assessment of the current situation, saying that most Jewish communities are either hunkering down or making emergency contingency plans to evacuate westward if necessary.

As of now, even with the incursion of Russian troops into Ukrainian territory, the Jewish communities are alert and ready to react, though still hoping that the situation will deescalate and not deteriorate.

Nearly 100 Ukrainian Jews immigrated to Israel on Feb. 20 to escape a dire situation they believed would only deteriorate even further.

Asked whether more Ukrainian Jews will move to Israel or other countries in order to escape advancing Russian troops, Bleich sounded skeptical.

“It’s hard to say that now people will be running en masse to Israel,” he said. “They didn’t do it in 2014. I don’t see it happening now unless things get really bad.”

“There has not been—and we hope there will not be—any anti-Semitism due to what is happening,” he said. “We need a lot of heavenly help from God that things should stay under control and not get out of hand.”