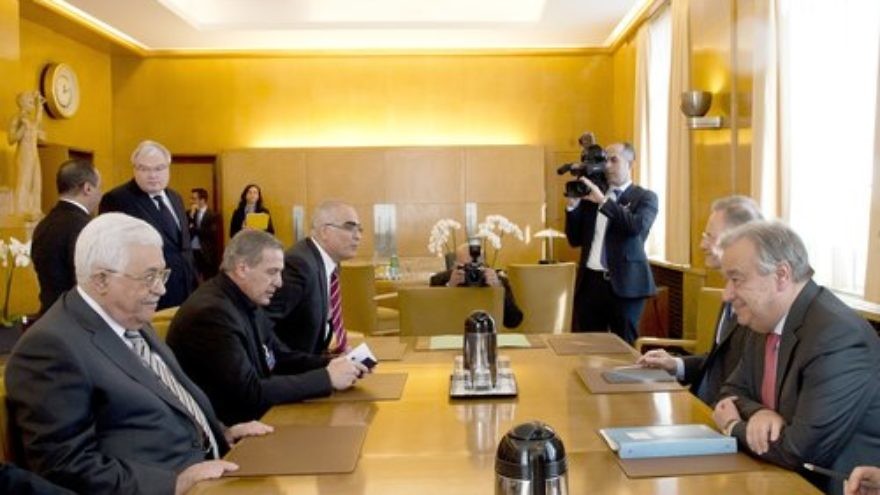 The United Nations has earmarked some $1.3 billion to fund Palestinian legal campaigns against Israel and to support the creation of an independent Palestinian state, in what experts are calling an unprecedented act singling out the Jewish state at the world body.

A document that was recently signed between the U.N. and the Palestinians outlines a “strategic programming framework” in the disputed territories from 2018-2022, and states that the U.N. will work to advise the Palestinian Authority on how to exploit “international accountability mechanisms” in order to hold Israel accountable for alleged violations of international law. The document is set to come into effect Jan. 1, 2018.

The document makes no references to Palestinian violations of international law and human rights, nor does it specify that the $1.3 billion in funding should be applied to humanitarian assistance. Rather, the U.N. document states that the money should be used for developing programs that support “Palestine’s path to independence.”

“The funding of this unprecedented and prejudicial aggression against a member state by the U.N. is clear evidence that the international body’s goal and solution is for a single Palestinian state to replace Israel,” Nitsana Darshan-Leitner, president of the Tel Aviv-based civil rights organization Shurat HaDin – Israel Law Center, told JNS.org.

“It’s a new form of anti-Semitic aggression and terror by other means, and it plainly violates the U.N.’s own charter,” she said.

Sixteen U.N. agencies appear as signatories in the document, including the OHCHR human rights office, the UNESCO cultural body and the UNRWA refugee agency. In signing the document, the agencies pledged to hold Israel accountable for its alleged violations and to document the purported abuses while simultaneously strengthening Palestinian groups’ “ability to advocate effectively for rights to be respected.”

In the document, the U.N. also pledged to monitor “the impact of Israeli violations” as well as how purported Israeli “breaches of international law” hinder the development of “Palestine.”

“There is no other example or precedent of the U.N. funding, training and advising one side of a conflict to pursue legal advocacy against another side,” said Hillel Neuer, executive director of Geneva-based UN Watch, a group whose stated mission is to “monitor the performance of the United Nations by the yardstick of its own charter.”

“For some reason, however, when it comes to Israel, the U.N. development agencies cross the bright red line from humanitarian assistance to political advocacy,” he said.

Although the amount of funding allocated by the U.N. towards overtly anti-Israel initiatives is unprecedented, Shurat Hadin’s Darshan-Leitner said the world body’s singling out of Israel and misuse of funds were “no big surprise.”

“The U.N. is misappropriating, once again, its donors’ funds and directing them into projects that help the PLO target and attack the Jewish state, instead of for humanitarian causes,” said Darshan-Leitner.

“After all, it’s the U.N.’s raison d’etre at this point,” she added. “We have seen a massive increase in these baseless lawfare suits being filed without any merit in the American federal courts in the past few years. The unilateral encouragement of these frivolous harassment suits against Israelis and Jewish individuals, which are obviously being funded and fanned on by foreign bodies, is a new Palestinian strategy to try to bedevil and deter support for Israel.”

Darshan-Leitner underscored that the U.N. “does not care one iota about justice for the so-called ‘victims’ it’s pretending to assist,” and that it uses Palestinian initiatives as a vehicle for turning Israel into an international pariah.

“It’s policies like this that display so clearly why the United States was moved to quit UNESCO, and is considering resigning [from] and defunding other U.N. agencies,” she said.

Prof. Avi Bell, a member of the faculty of law at Israel’s Bar-Ilan University and a senior fellow at the Kohelet Policy Forum think tank, voiced similar sentiments, telling JNS.org that the U.N.’s newly revealed strategic document “highlights the degree to which many organs of the United Nations are actively involved in diplomatic, legal and financial warfare against the state of Israel.”

“We often fail to appreciate the degree to which the U.N, supports, or even directs, anti-Israel propaganda and political activity,” said Bell. “This kind of activity obviously violates the U.N. Charter by infringing upon Israeli sovereignty and denying Israel the right of sovereign equality.”

Bell added that these actions “undermine international institutions by subordinating their legal roles to a political agenda [and] corrupting them in the name of anti-Zionist ideology….Unfortunately, the U.N.’s decades-long war on Israel is nowhere near ending.”