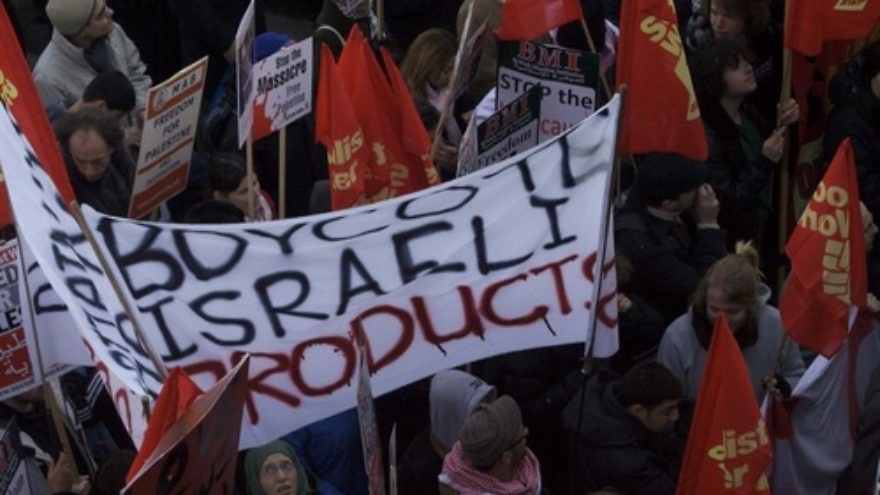 Click photo to download. A demonstration in London calling for a boycott of Israel on Jan. 3, 2009. The Modern Language Association's upcoming annual convention will include a resolution condemning Israel for “arbitrary denials of entry to Gaza and the West Bank by U.S. academics who have been invited to teach, confer, or do research at Palestinian universities.” Credit: Claudia Gabriela Marques Vieira via Wikimedia Commons.
Republish this article
747 WORDS
Spread the word.
Help JNS grow!
Share now:

Ahead of the consideration of a resolution condemning Israel at the Jan. 9-12 Modern Language Association (MLA) convention in Chicago, the leaders of Hillel International and the Israel on Campus Coalition (ICC) asked nearly 100 American university presidents, provosts, and campus officials who spoke against the American Studies Association’s (ASA) recent endorsement of an academic boycott of Israel to also publicly oppose the MLA measure.

The MLA resolution condemns Israel for “arbitrary denials of entry to Gaza and the West Bank by U.S. academics who have been invited to teach, confer, or do research at Palestinian universities.” In a letter to university officials obtained by JNS.org, Hillel President and CEO Eric Fingerhut and ICC Executive Director Jacob Baime stressed the importance of taking pre-emptive action against the potential passage of the MLA resolution.

“Rather than responding after the fact, as we were all forced to do with the ASA resolution, we urge you to make clear, in advance of the MLA resolution, your opposition to it and to any other such efforts to hold Israel to a different standard than any other nation,” wrote Fingerhut and Baime. “In this way, the members of the MLA will fully understand the depths of opposition prior to casting their votes.”

Baime reiterated that point in an interview with JNS.org.

“I don’t think we need to wait for the MLA to take action to speak out,” he said. “I think that the MLA should hear from the academic community loud and clear that this is not something that our colleges and universities support. I think that the same university presidents who spoke out about the ASA boycott should feel comfortable speaking out against the MLA resolution because it holds Israel to the same double standard.”

The letter by Baime and Fingerhut notes that in MLA’s resolution, Israel is “being singled out for actions other Western nations pursue routinely.”

“The United States, Great Britain, France, Canada, and Australia, not to mention Western-leaning nations in the Middle East, such as UAE, Qatar and Saudi Arabia (which regularly partner with Western universities), all deny entry to individuals, for any number of reasons,” the letter states.

The letter also notes how the resolution is being put to a vote only after an MLA convention roundtable discussion, titled “Academic Boycotts: A Conversation about Israel and Palestine,” that will feature supporters but no opponents of the Boycott, Divestment and Sanctions (BDS) movement against Israel.

“The MLA’s leadership was asked to make alternative views available on the panel, but declined to do so,” wrote Fingerhut and Baime, whose groups were denied a meeting room at the MLA convention to present an alternative panel to the BDS roundtable, but organized an offsite roundtable on academic freedom in Israel for Jan. 9. “This goes against any notion of free and open discussion, to which most university leaders subscribe.”

MLA’s resolution also “falsely accuses Israel of abridging the right to education among its citizens and Palestinian Arabs,” the letter states.

“Israel provides a full array of education opportunities to its citizens as well as residents of the administered territories,” wrote Baime and Fingerhut. “In fact, one of the participants of the panel discussion, Omar Barghouti, received his Master’s Degree at Tel Aviv University and is currently working on his second Master’s there.”

Baime told JNS.org that he believes the resolution “prepares MLA members to consider a more ambitious program to isolate Israel.” It is not a “far stretch” to a full academic boycott of Israel from a resolution like MLA’s that condemns the Jewish state in a “misguided and flawed fashion,” he said.

“It’s not a full boycott [like the ASA resolution was], which is great, but this [MLA] resolution has been prepared by individuals who deny Israel the same rights afforded to any other nation state, and they’ve made it clear that they’ll use any tool available to accomplish their goal,” Baime said.

“Opposing the MLA resolution does not mean agreeing with Israel’s decisions with regard to border entry, administration of disputed territories, or treatment of Palestinian Arabs,” Baime and Fingerhut wrote in their letter to university officials. “We take for granted that on the issue of Israel, there always will be a wide diversity of views—and within our own ranks are many who take umbrage with Israeli security policies. But the MLA does not traditionally weigh into these issues.”