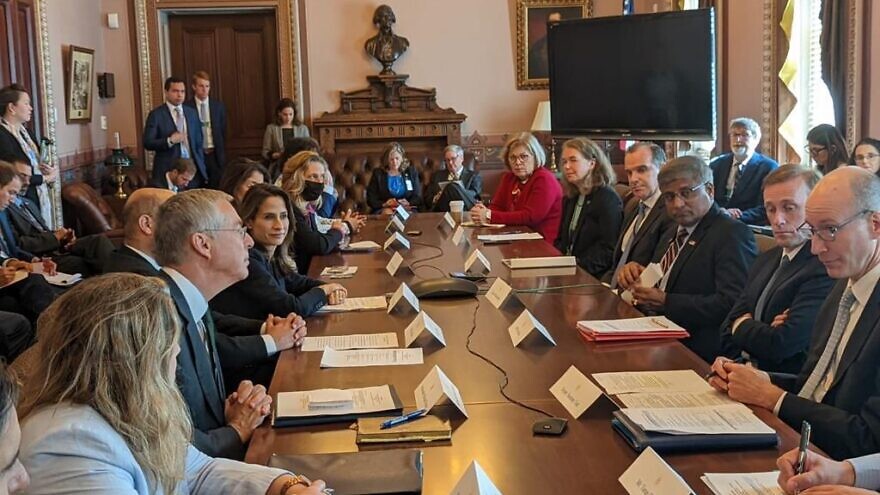 (September 29, 2022 / JNS) Despite the close relationship between the U.S. and Israel, their economic partnership has lagged behind America’s cooperation with other allies, participants expressed on Wednesday at the first high-level strategic dialogue meetings on American-Israeli technology collaboration in Washington, D.C.

The dialogue was outlined in the Jerusalem Declaration signed by Israeli Prime Minister Yair Lapid and President Joe Biden on July 13, during Biden’s first visit to Israel.

“Up until now, cooperation with the U.S. has not fully utilized its potential. The joint research with the U.S. has been only 19% of Israel’s research with other countries, as opposed to 56% for Europe,” Farkash-Hacohen said in a statement. “Good partners and allies, like Israel and the U.S., need and can take significant steps to increase the scope of the joint research that constitutes the basis for high-tech and that is what we are currently doing.”

According to a readout of the White House meeting provided by the Embassy of Israel to the U.S., the discussions were held by several bilateral working groups on the topics of climate change, pandemic preparedness and artificial intelligence (AI), developing steps for further cooperation between the two countries.

The AI working group decided that a joint American-Israeli team would promote a global standard on reliable AI at international forums such as the Organisation for Economic Co-operation and Development (OECD). Another cooperation will be with the U.S. Department of Veterans Affairs to promote mental health among discharged soldiers.

In the health sector, both governments are expected to sign Memorandums of Understanding (MOUs) next month that would create a joint group to make Israeli and American government data more available to public health researchers in both countries to better predict pandemics and other threats, as well as enhance cooperation in developing risk reduction mechanisms and technological development of drugs and vaccines.

The working group on climate change discussed food security, hydrogen-based energy and the early prediction of extreme climate events. The group planned to meet again during the United Nations Climate Change Conference (COP27) in November to formulate procedures for the implementation of the plans.

It also decided to establish a joint team with the U.S. Department of Agriculture to develop uses for AI to identify agriculture that could be damaged by climate change and to make genetic modifications that would make crops more resilient to such changes.

Lapid said in a statement that the launch of the strategic dialogue and the establishment of the working groups were important steps in taking the U.S.-Israel relationship to “new heights” and that the Jerusalem Declaration opens the door for Israel “to join a select, prestigious group of countries with which the U.S. is promoting research at the highest level, on subjects that currently top the scientific agenda.”

Following the White House meetings, the delegation went a short distance across Lafayette Square to the headquarters of the U.S. Chamber of Commerce to discuss how the new initiative can work not just between the two governments but also between private companies in the U.S. and Israel.

At this roundtable discussion, many of the same points were raised as in the White House meeting, but were geared towards how the private companies in attendance could participate in the new relationship.

Joining the meeting were Israeli government officials involved in the science, high-tech, health and security industries, as well as representatives from corporations in Israel and the U.S., including Google, Salesforce, Chevron, Capital One, Microsoft and many others.

“I think what has been announced by the two governments around AI, cyber, water, health, agriculture, beyond, speaks volumes to the recognition of the importance between the public and private sector,” said Myron Brilliant, executive vice president and head of international affairs at the U.S. Chamber of Commerce.

Brilliant, who led the meeting, pointed out that the ambitions of increased cooperation between Israel and the U.S. cannot be done by the governments alone without the participation of the private sector.

He listed four main areas where he would like to see public-private partnerships built.

The first, he said, was to create a robust stakeholder engagement process to allow for private sector involvement in the cooperation from the start, rather than at the end of the dialogues. He also called for the dialogues to be “action-oriented.”

Second, Brilliant said that the Chamber of Commerce wants to focus fundamental enablers on tech cooperation, such as digital trade, harmonizing data, and cooperation on governance and privacy regulation issues.

Third, he called for expanding federal and state funding for bilateral innovations and leveraging the newly passed CHIPS and Science Act of 2022 with more engagement from Congress and the Knesset.

Fourth, he called to “put principles and ideas out on the four pillars that are being discussed between the two governments.”

The Chamber of Commerce and the Israeli delegation signed another MOU which Brilliant said would commit the Chamber and its partners in Israel to work closely with their respective governments on each of the four pillars.

Brilliant was joined in the opening remarks by Farkash-Hacohen; Israeli Ambassador to the U.S. Michael Herzog; Tarun Chhabra, senior director for technology and national security with the National Security Council; and Marian Cohen, president at Mer Group, chairman of Israel Federation of Binational Chambers of Commerce and president of the Israeli Hi-Tech Association.

Cohen lauded the steps being taken to enhance cooperation between the two countries but reminded the attendees that the private businesses around the table, many in the high-tech industry, were not always eager to complement government activity. Particularly in the high-tech government intervention “could be seen as cumbersome and restraining,” he said.

“We have to admit that in the strategic areas identified by our respective leaderships, the only way forward to confront them effectively is through private sector and governmental cooperation and complementarity,” Cohen said.

An example of how this cooperation between the government and private sector could be effective, he added, is Israel’s response to the COVID-19 pandemic.

“The technological edge of the Israeli health system, together with directives from the government and a creation of a regulatory system that allowed the use of privately driven technology to save lives and economic systems alike, and the ability of government and private sector cooperation … proved itself extremely successful,” he said.

Farkash-Hacohen said that in 2021, despite the lingering pandemic, the high-tech industry in Israel outpaced all expectations—breaking records in investments and new initial public offerings (IPOs), with more unique IPOs than all of Europe.

But while the sector is flourishing, Farkash-Hacohen said that it is suffering from a lack of manpower and diversity, with few Arab Israelis, women and Israelis from the far north and south of the country involved in high-tech.

“We’ve done a lot of work in the past year and a half to change that situation and to launch a lot of long-term programs in the government that would bridge this social gap,” she said.

Once again, she stated that there is still work to be done to improve cooperation with the United States.

Herzog noted that the U.S. invested about $40 billion in Israel during 2020, while Israel invested $29 billion in American companies.

“Think about it, we’re a small country in Israel,” he said, adding, “Both of us are powerhouses of innovation and technological development. And we should do more and we could do more.”