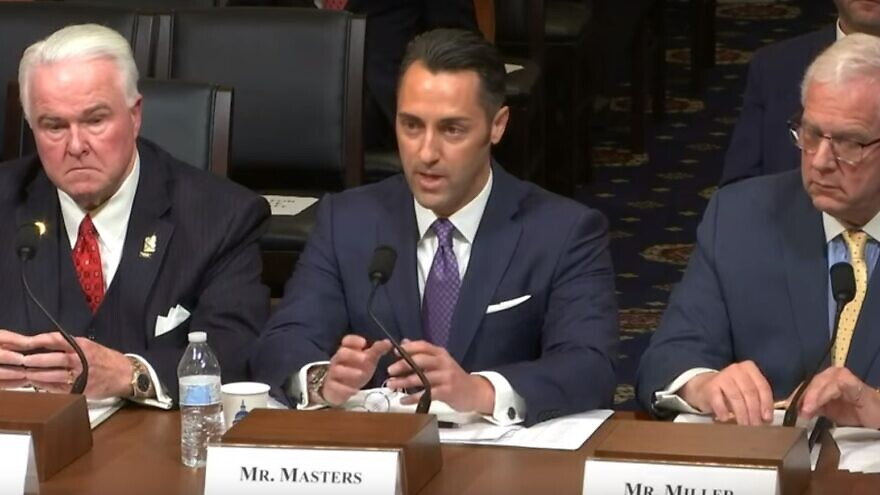 Michael Masters, CEO and national director of the Secure Community Network, the security arms of the Jewish Federation of North America and the Conference of Presidents of Major American Jewish Organizations, in his testimony before the Committee on Homeland Security. Source: Screenshot.
Republish this article
491 WORDS
Spread the word.
Help JNS grow!
Share now:

(January 17, 2022 / JNS) The Jewish community “must be ready” and stay “vigilant and strong” to respond to any anti-Semitic incidents, emphasized Michael Masters, CEO and national director of the Secure Community Network, the security arm of the organized Jewish community.

“We are just 2 percent of the U.S. population, but 58 percent of religiously motivated hate crimes are against Jews,” he said. “Anti-Semitism is real, and we are determined to fight it. We must commit to action.”

That action includes preparing and training members of the Jewish community—not just synagogue officials and leadership, but rank-and-file members on how to protect their building, where panic buttons are and how to contact police in an emergency.

“We can never let our guard down,” he stated.

Masters made his remarks during a press briefing on Sunday afternoon, a day after the attack on Congregation Beth Israel in Colleyville, Texas. According to authorities, Malik Faisal Akram, a 44-year-old British man, took four people hostage on Saturday morning during synagogue services. The first few hours of the standoff were livestreamed as the services were being broadcast to synagogue members at the time.

One hostage was released by the gunman in the afternoon. However, as the hours dragged on, the gunman became more agitated.

As the synagogue’s rabbi, Charlie Cytron-Walker recounted on “CBS Mornings” on Monday: “It didn’t look good; it didn’t sound good. We were terrified, and when I saw an opportunity where he wasn’t in a good position, I made sure that the two gentlemen still with me that they were ready to go. The exit wasn’t too far away. I told them to go, I threw a chair at the gunman, and I headed for the door, and all three of us were able to get out without even a shot being fired.”

The gunman died as law enforcement stormed the building.

Authorities have praised Cytron-Walker for remaining calm during the 11-hour standoff, while he credits security training that he has received over the years from both law enforcement and Jewish groups, including one from SCN, with helping him know what to do.

Also speaking during the press briefing was senior national security advisor for SCN Brad Orsini, who said that “we need robust training for every one of our shuls across the country” because “preparedness is all we have.”

He urged synagogues and Jewish communal sites to perform drills as much as possible so that the security training becomes “holistic.”

More than 17,000 people took part in some of SCN’s training in 2021, but Orsini said that’s not enough. “Our intention is to train as many people in the Jewish community as possible. Our organization is increasing our training programs every day,” hoping to eclipse the 17,000 number this year, he explained.

Added Masters: “We need to prepare every synagogue, school, every camp across the country for these types of attacks. It’s unfortunate, but that’s the reality we live in.”