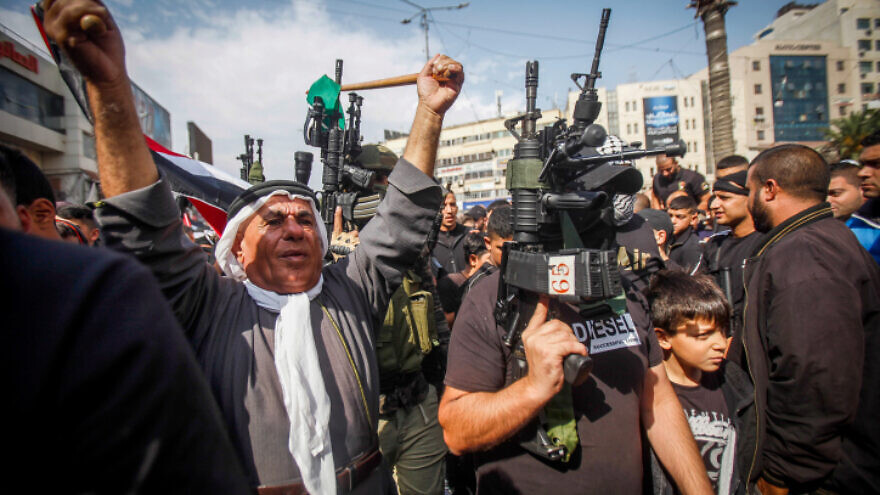 The funeral of five Palestinian terrorists who were killed during a firefight with the Israeli army in Nablus, Oct. 25, 2022. Photo by Nasser Ishtayeh/Flash90.
Republish this article
900 WORDS
Spread the word.
Help JNS grow!
Share now:

(October 31, 2022 / JNS) As Palestinian terrorism moves south from its epicenters in Nablus and Jenin, one former Israeli defense official believes that despite the blows dealt to it by the Israeli security forces, the Nablus-based Lions’ Den terrorist group will continue to serve as a model for many Palestinians.

On Oct. 25, Israeli forces raided a bomb lab in Nablus belonging to the group, killing its group’s leader, Wadi al-Houh, and four other gunmen. It was the latest in a series of security raids against the group, which had taken control of parts of the city after carrying out a series of terror attacks against Israelis, a number of them deadly.

Col. (res.) Moshe Elad, one of the founders of security coordination between the Israel Defense Forces and the Palestinian Authority, and a lecturer at the Western Galilee College in northern Israel, told JNS: “We will apparently hear more about other groups and their various names who succeed the Lions’ Den, because the Palestinian history and legacy point to imitation as a central motive in this society.”

In previous years, he noted, “There were the ‘hawks of Fatah’ and the ‘Eagles of the Popular Front for the Liberation of Palestine,’ and other Lions’ Dens of Fatah—in other words, the comparison to animals is a winning and prestigious message.”

Other groups will be sure to fill any vacuum, he cautioned.

“Lions’ Den is perceived as a winning organization” by Palestinians despite its leading members killed and arrested and some of its members turning themselves in, he said.

With regard to the Palestinian Authority, he continued, the P.A.’s decision to place some members of the Lions’ Den in protective custody is part of “the old revolving door policy, and it is likely that news will soon emerge of their release” following public pressure.

“Staying in the P.A.’s prison is temporary, and soon there will be reports that they are free and that they have promised not to carry firearms,” he stated. “If they return to terrorism, Israeli security forces will be on their trail, it is fair to assume.”

The Washington-based think tank the Foundation for Defense of Democracies said that if Palestinian terrorists are able to perpetrate a mass casualty attack in Israel, the IDF would be likely to take its counter-terrorist operations, which are being launched under the umbrella name of “Operation Break the Wave,” to a new level.

Enia Krivine, senior director of both the FDD’s Israel Program and its National Security Network, said that such an outcome would be “in neither Israel nor the P.A.’s interest.”

According to Krivine, “The IDF’s ‘Operation Break the Wave’ has so far been successful at bringing the fight to Palestinian militants in the northern West Bank and keeping Israeli citizens safe. If Israeli casualties stay low, this unfortunate game of cat and mouse in the West Bank will likely continue. However, if Palestinian terrorists perpetrate a mass casualty event in Israel, [the operation] will likely move into a whole new phase. This kind of outcome is in neither Israel nor the P.A.’s interest.”

Last week, members of the P.A.’s security personnel praised the Lions’ Den. According to Palestinian Media Watch, in response to the October 25 killing of terrorists and the exposure of the bomb factory in Nablus, Fatah Deputy Chairman Mahmoud al-Aloul stated that the P.A. Security Forces were fighting together with terrorists—“the Tanzim”—against Israel. He added that Israeli soldiers were wounded “as a result of the brave position of the Palestinian security forces,” and said that all Palestinians are “one unit,” reflecting the P.A.’s attempt to regain domestic legitimacy.

Asked if it was realistic to expect the Palestinian Authority to retake control of Nablus, Elad said this could be done only with Israeli assistance, and only if the P.A. proved that it wanted to do this.

“It appears as if the P.A.’s security forces are decreasing in capability, and the closer we get to the day that [P.A. leader Mahmoud] Abbas departs the stage, the more there will be a decrease in their ability and the more there will be a desire to please the Palestinian people,” he said, meaning that the P.A. will express more “understanding” towards terrorists operating in Samaria.

“In Jenin the situation is far more difficult than in Nablus,” Elad noted, adding that “there is no P.A. security forces presence at all” in the city.

“Everyone is counting down the days to Abbas’s departure. Only if one of Abbas’s successors is able to gather great power and Israeli and American assistance and achieves the virtually impossible, creating order in the West Bank, will it be possible to talk about preventing chaos,” Elad cautioned.

“The P.A. seems closer to a civil war than a smooth transfer of power. Everyone is seeking to delay the end and continues to hold on to Abbas, who forms a guarantee against collapse,” he said.