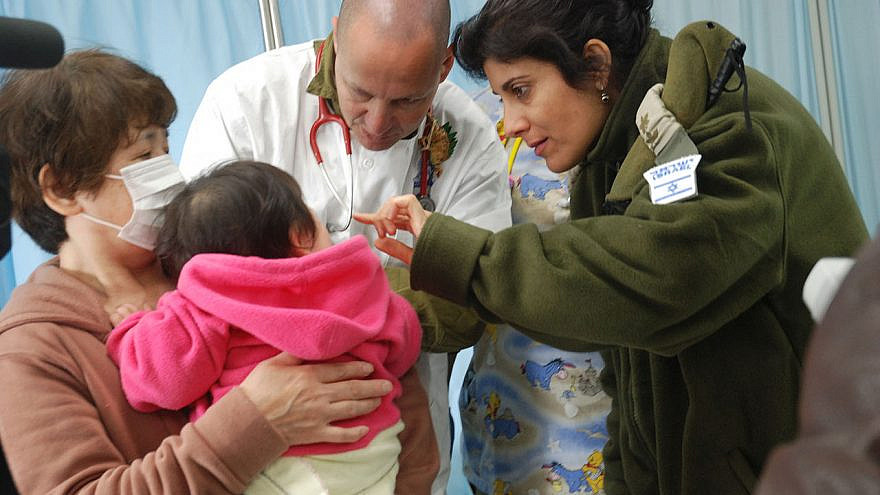 (March 31, 2021 / Israel Hayom) March 11, 2011 began as an ordinary winter day with gray skies for the 12,000 people living in the fishing village of  Minamisanriku. None of them knew that within several hours their world would be turned upside down, in the most destructive way imaginable.

At roughly 3 p.m., a massive earthquake was detected not far east of Japan, triggering an immediate severe tsunami warning for the residents of the coast. The people of Minamisanriku began gearing up for what may unfold. “This is a tsunami-prone area and that is why we have been well-drilled on this,” said Mayor Jin Sato.

Sato, together with his team, rushed to a tall building and began relaying orders to facilitate the evacuation of residents. The problem was that while the official warning spoke of a six-meter (20 feet) wave, the actual tsunami was almost three times higher. “It just went over our heads and ravaged the place; I was swept to a staircase and broke two ribs,” he recalls.

The waves hit with an unimaginable force, destroying the small wooden homes in its path, leaving behind a long trail of debris and despair. Only the cement buildings were left standing. “We lost 831 members of our small community, with 70 percent of the buildings razed to the ground. The rest were severely damaged,” says Sato. “The industrial area was gone; the municipality building all but disappeared from the face of the earth.”

This was the worst calamity his town has ever been hit with. Things were on the verge of despair. Roads were either blocked or just destroyed; the power grid and cellular network were down, and the water supply was disrupted. Japan’s armed forces brought as much help as they could, but the terrified residents who had lost their homes faced a predicament of epic proportions.

Masafumi Nishizawa, a local physician, was the only medical doctor in the city’s evacuation center in the immediate aftermath. “Only after a week did more medical teams arrive, totaling 20 specialists; the problem was that all the medical facilities had been decimated. We had no equipment to examine people or to operate.”

The local leaders were eager for help, and this came from the other end of the world: Israel.

An Israel Defense Forces delegation was in the area some two weeks after the waves hit. It was the first foreign-relief delegation to arrive at the site. The government of Japan made any foreign assistance contingent on having the teams bring their own equipment, and Israel was the only country that could meet that requirement on such short notice.

The Japanese parliament also held a special session to issue the members of the Israeli delegation with a special permit that would allow them to treat the locals. Eventually, after passing through many hoops and dealing with many concerns, including worries over being exposed to radiation from the reactor in Fukushima that had undergone a meltdown, the delegation landed.

It comprised doctors, nurses, X-ray specialists and all the necessary equipment. They immediately began setting up a field hospital.

“We required that they be able to conduct tests, but we could not imagine that they would have so much equipment and be so skilled at what they do,” Nishizawa recalls in a conversation with Israel Hayom. “Their expertise was amazing, and they had everything up and running at record speed.”

Among the first patients to be admitted to the hospital was Sato’s own staff, and he himself was given an X-ray. “They were courteous, they smiled, and I was very grateful to get treatment,” he says.

Despite the predicament and the relief at finally having their medical needs tended to, the Japanese, who only seldom have interaction with foreign medical teams, remained suspicious. The Israelis were worried animosity would develop.

“There were many elderly in the city who needed medical attention. When I heard that a foreign delegation was on its way, I was a bit worried, because there was concern that they would be terrified of having to be checked—amidst the chaos of this tragedy—by a foreigner, having not met a non-Japanese all their lives,” says Nishizawa, who worked with the Israelis all through their stay.

But these concerns were ultimately allayed, and the doctors—with the help of interpreters—engaged with the patients courteously and managed to imbue a sense of confidence that they were on their side, despite the cultural gap.

The Israelis won over the locals with various gestures that underscored just how dedicated they were to help them. “Pregnant women faced particular duress because they lacked proper equipment. They had to travel long distances just to get checkups or to give birth,” Nishizawa says. “But the Israeli delegation had a doctor trained in delivering babies, and after he had learned of the situation, he began making house calls, accompanied by a local female nurse. This level of dedication and their willingness to extend a helping hand to the community was really touching for me,” Nishizawa says with admiration.

Far away, but close at heart

On April 10, a month after the disaster, the delegation left Japan, having handed over a functioning field hospital to the local authorities. Today, a memorial stands on the grounds of the former facility, donated by Israel. The memorial is a testament not just to the horrific events of 2011, but also to the bond that was forged between the two nations in their wake.

In the decade that has passed, the city made tremendous strides in building new homes and commercial centers and in restoring parks and neighborhoods. The fishing industry also got back to business and provides employment to many locals.

But the gaping hole left by the tsunami in the hearts of the residents has remained. “Our biggest challenge is getting back up and recreating the sense of community,” says Sato. “Over the past 10 years, our community has seen crises many times, as people left to other places. We want them to come back and feel safe again; this is a daunting task.”

Despite the great loss of life and the hardship that has ensued in the years since, both Sato and Nishizawa can’t forget the tremendous bond that was created in its wake between the medical staff and the local residents. “Israel helped us so much after the disaster struck, and we are greatly indebted to it,” the mayor says. “Last year, we wrote a letter of thanks to all Israelis and had it sent to the Israeli embassy. Our people are very grateful for this; we will never forget Israel’s help.”

When Nishizawa speaks about his experience with the Israeli teams, he also mentions  Israel’s rapid pace of vaccinating its citizens against COVID-19. “This shows more than anything else what Israelis are capable of,” he says.

“I think that for many Japanese, Israel is considered to be some far-flung country; but for us, Israel—despite its being so far away and so different—will always be remembered as the first country that came to our rescue and gave us the feeling that we are connected to the rest of the world. Japan is an island nation, and our first inclination when disaster strikes is to handle things on our own; but Israel, rather than focus on its own problems, extended its outstretched hand, and we are tremendously thankful for its assistance.”