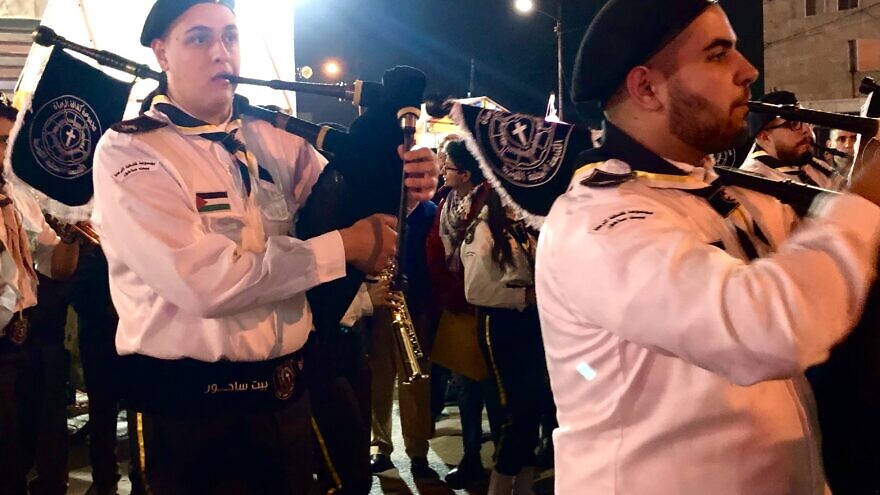 (December 11, 2022 / JNS) On the surface, Christmas preparations are back with a vengeance in the Bethlehem area after two bleak pandemic years.

In Beit Sahour, a small town that borders Bethlehem, where Christians believe the angels announced the birth of Jesus, Christmas bling adorns almost every business. Tour groups file in and out of the grounds of the Shepherd’s Field Chapel and the public Christmas tree lighting ceremony in the main square is a lively, well-attended extravaganza.

But the Christians who live in the Bethlehem area under Palestine Authority (PA) rule and on the wrong side of the security barrier live complicated lives. Many of them are eager to explain their concerns at the one time of the year when the attention of the world is focused on their hilly terrain six miles south of Jerusalem.

Samir Qumsieh, 74, is a well-known community leader who runs Al Mahd Nativity TV, the only Christian TV station in the Palestinian territories. In 2010, his station was closed down by the PA but subsequently allowed to reopen. In 2006, he complained of death threats and intimidation and was on the receiving end of Molotov cocktails thrown at his home.

Today Qumsieh warns visiting journalists not to misquote him, since “it could be life-threatening.”

When young Muslims attacked a church in the town two months ago, Qumsieh says, “Abu Mazen [PA President Mahmoud Abbas] sent someone and they solved it.”

“As a minority we’re not persecuted,” he adds.

Qumsieh has two major concerns as Christmas 2022 approaches: emigration and the rise of Islamic extremism.

In 2022, there are only 33,000 Christians in the three towns of the Bethlehem area, Qumsieh estimates.

In Bethlehem, only 1 in 5 residents is Christian, a sharp decline since the town was placed under PA control in 1995, when 80% of the town identified as Christian. In Beit Jala, the Christian majority has fallen from 99% to 61%. In Qumsieh’s hometown of Beit Sahour, the 12,000 to 13,000 Christians living there today make up around 65% of the population, compared to 81% a few decades ago.

Qumsieh, who says he’s a member of one of the largest Christian families in the Holy Land, talks about the reasons for the emigration in the same breath as he decries the rise of religious fundamentalism.

“Many young people don’t like life here and leave for economic reasons,” he states. One of his sons went to study in the United States, met and married an American and chose to stay there. Of his six college-educated siblings, Qumsieh is the only one remaining in Beit Sahour. The low Christian birth rate is another factor for the demographic decline, he says.

As for extremism, “on the official level, the PA doesn’t make problems. But among the people, there’s influence of ISIS. It’s not the same Beit Sahour that I know. Things have totally changed,” Qumsieh says.

He is particularly sensitive to the influence of fundamentalist Islam since he comes from a wealthy Christian family in Kuwait that fled after Saddam Hussein invaded in 1990.

“A major change happened in our society. Before Hamas took over Gaza in 2005, there were 5,000 Christians in Gaza; now there are barely 600-700. It will be a catastrophe if there are no more Christians in the land of Jesus. Who will take care of the churches?” Qumsieh asks. 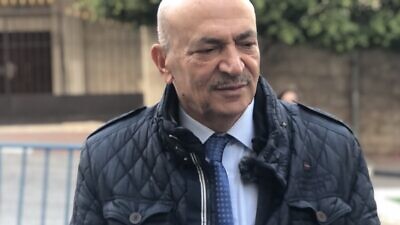 An hour before he presided over the official Christmas tree lighting ceremony in the town square, Beit Sahour’s Christian mayor, Hani al-Hayek, tells visitors of his concern over the population drain.

More than 20,000 Palestinians, including members of his family, live in Chile, al-Hayek relates. Acknowledging that emigration started in the 1890s, the mayor blames the current exodus on the status of Beit Sahour as part of the PA since the 1993 Oslo Accords, and on Israel’s security barrier that was constructed around Jerusalem 20 years ago.

“We are here to stay in our land and we need to encourage people to stay but they need safety and security for their future. We want our freedom and independence, to achieve our dreams as Palestinians,” he states. “Land is the most important thing,” he adds, citing the physical barriers as well as the presence of Israeli communities surrounding the town that prevent expansion.

Al-Hayek points out that the main industries in Beit Sahour are tourism as well as the more than a hundred olive wood and mother-of-pearl workshops that produce high-end products whose main market is churches in America. 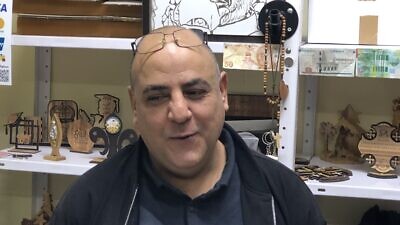 Yasar Barham, the owner of the Barham factory located on a quiet street in Beit Sahour, greets visitors in front of a prominent picture of Yasser Arafat on display behind the counter.

Many of the items on display feature the logo of the “State of Palestine, Ministry of Tourism and Antiquities.” Barham tells JNS, “Arafat was good for every Palestinian. Abu Mazen also.” 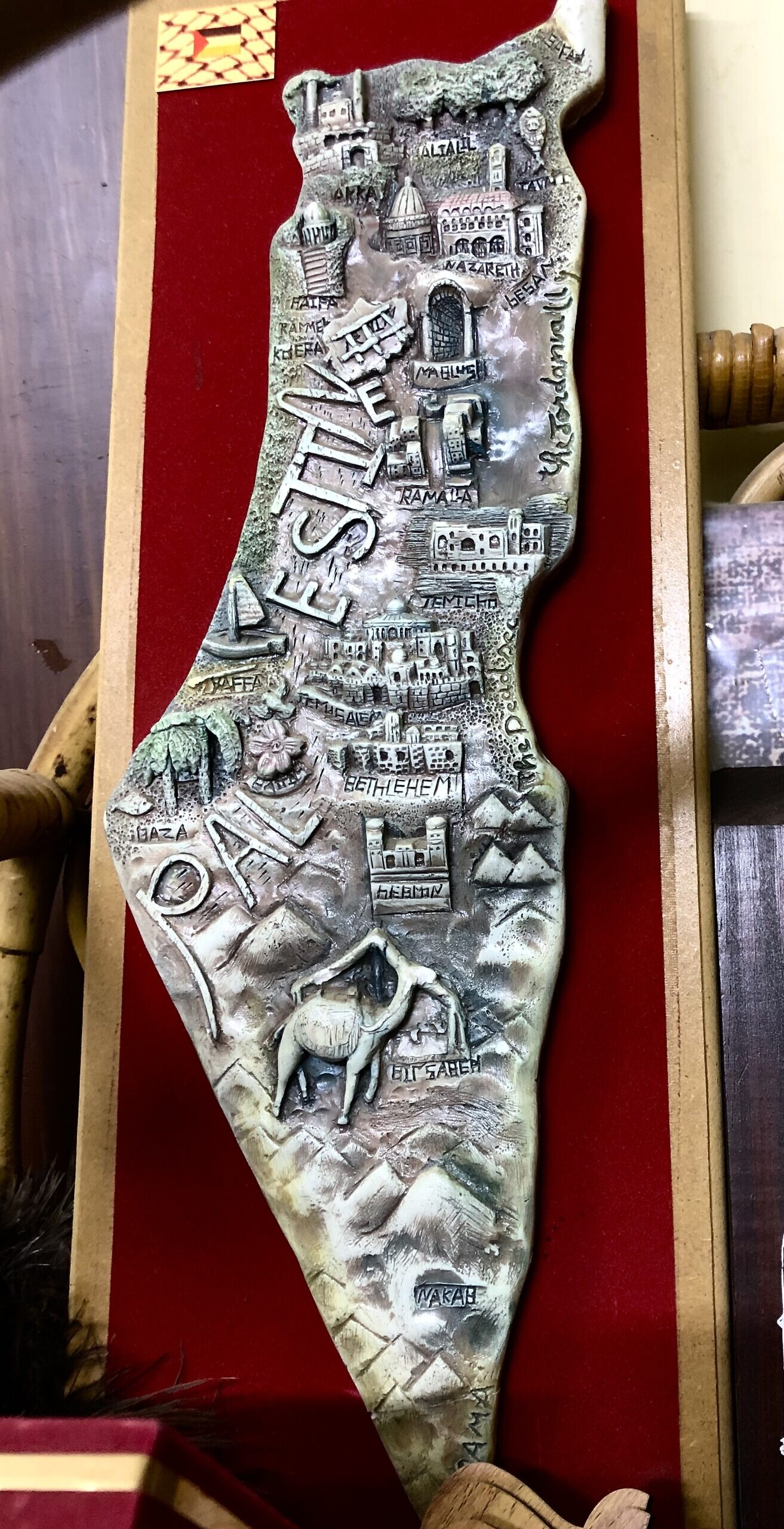 All the beautifully crafted and decorated relief maps of Israel in the store are emblazoned with “Palestine” covering the entire length and breadth of the country.

“The situation of Christians here is very good,” Barham states. “We’re used to the occupation already. It’s very bad, but nothing can be done about it.”

Jamil Jaraisy, 82, scion of a large Christian clan that includes Ramiz Jaraisy, a former mayor of Nazareth, says that the “Israeli occupation changed our life.” They used to be able to come and go to visit the Nazareth branch of their family without restriction.

“Today the restriction of movement affects our celebration of Christmas,” he says. Jaraisy also parcels out blame to the PA, which “after Oslo did nothing to support us as a community.”

Jaraisy tells JNS that his family has been in Beit Sahour since the 13th century. “We are sons of the land,” he says. In the past, the Christians had good relations with their Muslim neighbors.

It was after the Iranian revolution of 1979 that they “started to feel tension” with them, Jaraisy explains.

Jaraisy’s wife interrupts to urge him to tell visitors how their son was kidnapped for 40 days after a dispute over business with a Hebron Muslim in 2014.

Um Burhan Jarayseh says that her son was tortured and returned with head wounds. “The PA did nothing to help,” she adds. “The [Hebron] businessman disappeared, my son was traumatized and now he lives in Germany.”

The findings of a recent poll conducted among Palestinian Christians in Judea, Samaria and Gaza provide more insight into the brain drain.

Sixty-two percent of respondents to the Palestinian Center for Policy and Survey Research (PSR)’s  February 2020 survey said Israel’s goal is to expel Christians from their homeland.

Seventy-seven percent say they are worried by the presence of fundamentalist Salafi Muslims; 69% are concerned about armed factions such as Hamas; and 67% are worried about the implementation of sharia law. Some 43% believe Muslims don’t want Christians in the land.

PSR director Dr. Khalil Shikaki wrote: “The largest percentage indicate that their desire to emigrate stems from economic reasons, while a smaller percentage indicate a desire to search abroad for educational opportunities, a safer, more stable and less corrupt place, and a place that allows greater liberties and religious tolerance.”

Down in the square, hundreds of youthful scouts dressed in uniforms adorned with the Palestinian flag march through town playing traditional Christmas songs. Their instruments of choice are all manner of drums accompanied by Scottish bagpipes. Both scouts and bagpipes are a legacy of the British Mandate for Palestine, but somehow they’ve become the traditional accompaniment to Christmas celebrations in the Bethlehem area. 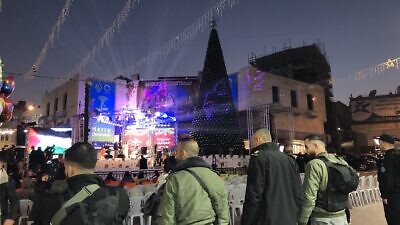 As the music fades away, al-Hayek took the opportunity to deliver a lengthy speech decrying the “occupation” and the latest “martyrs” (three Palestinian gunmen killed that day in an IDF operation to clear terrorists out of Jenin) before he signals for the lighting of the town’s 20-foot Christmas tree.