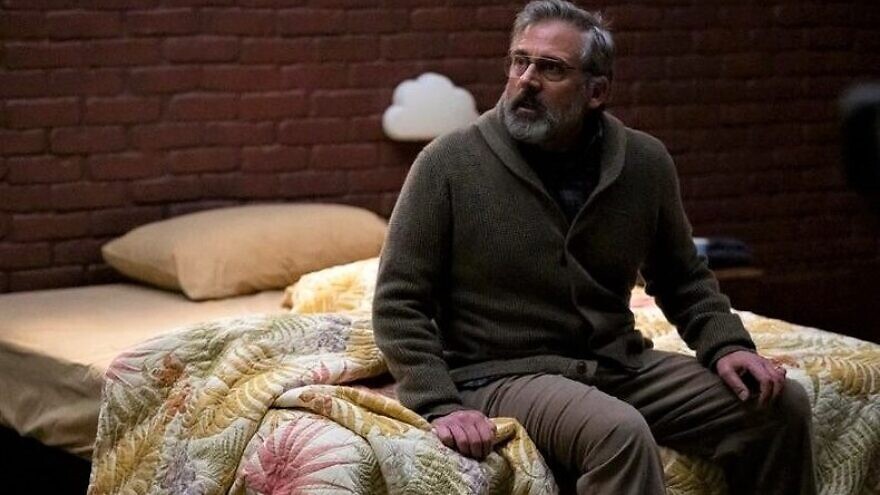 (September 2, 2022 / JNS) Dr. Alan Strauss (played by Steve Carell) wakes up, tries to get out of bed and sees that his feet are chained. In flashbacks, we hear that he has called his daughter, Shoshanna, to say hello, and given the guitar of his deceased wife to his Orthodox son, Ezra (played by Andrew Leeds), who wears a kipah and was set up with a woman named Chava (played by Amy Handelman).

So who has taken the therapist hostage?

That would be Sam (played by Domhnall Gleeson), a patient who admits that he wasn’t totally honest. He reveals that he is a serial killer who steals his victim’s wallets so that police can’t easily identify them. As the therapy hadn’t been going too well of late because he would evade questions and talk about country music songs, Sam decides to have Strauss all to himself.

The simple setup for “The Patient,” on FX and available on Hulu, is a tension-filled one.

About four months earlier during his job as a restaurant inspector, a guy talked down to him, and Sam has wanted to go back and kill him ever since. He wants Strauss to help talk him out of it, even giving him a compliment, telling him that he met with “three different Jewish therapists. And I chose you.”

Still, Strauss must wonder if Sam plans to dispense with him after the therapy, if it ultimately works (or not).

As Sam, Gleeson is credibly creepy as the guy who holds Strauss captive and knows it’s wrong but does it anyway. His rationale is that he needs more time and had to tell his therapist the truth of who he really is for the talking to work. While Gleeson usually plays a nice guy (in the film “About Time” or a “Black Mirror” episode where he played a husband who died and then the dead robot of himself), he’s believable as a baddie with a small bit of conscience, at least enough to want to stop murdering people.

“I’m not your therapist, anymore,” Strauss tells him. “I’m your prisoner.”

“I brought you here so we could work together,” says Sam. “I know you hate it, but if you’re not gonna be a part of the process, where is that gonna leave us?”

Strauss is able to get up out of bed but can only walk a certain amount; feet chained to the wall, he’s imprisoned in the room.

‘It just got richer and richer’

Carell is known for his comedy in “The Office,” in “Bruce Almighty” (2003) and its sequel four years later, “Evan Almighty” (his namesake character), and a number of other feature films, such as “Little Miss Sunshine” (2006), where he was a straight-jacketed mental patient that spends a few days with his even crazier family.

He can also do drama well, which he showed in the heart-wrenching 2018 film “Beautiful Boy,” as well as “The Morning Show” on Apple TV+, where he played newscaster Mitch Kessler, who fell from grace, and as John du Pont in the film “Foxcatcher” about bad things happening while training wrestlers. In those roles, negative actions brought the character down. In “The Patient,” it does not appear that Alan deserves what has taken place.

We know that Sam’s father beat him and that it caused anger issues.

Strauss eventually accepts the situation he is in, but the caveat is that he makes Sam promise to not commit a violent act against him or anyone else without speaking to him about it first.

Carell, as a bearded wise man, knows he must tread lightly. One desperate attempt to save himself fails miserably.

The show is written by Jewish writers Josh Fields and Joe Weisberg. Weisberg told Newsweek that the premise is not based on a true story; the idea stemmed from both writers having been in therapy, and he explained the Jewish connection.

“We immediately knew we were going to bear a lot of fruit, and we didn’t know exactly which fruit,” he told Newsweek. “And that’s part of what’s fun about writing—you find out what the fruit is as you go along and then you pick it.”

Still, he continued, “I don’t think we would have immediately said this is going to start aping into images and feelings about the Holocaust that you have inside you somewhere if you’re Jewish, but that was one of the many places it went. It just got richer and richer.”

Based on the first two episodes, “The Patient” will certainly make you look forward to tuning in to see if the good doctor can save himself—and possibly, the serial killer—from taking more lives.