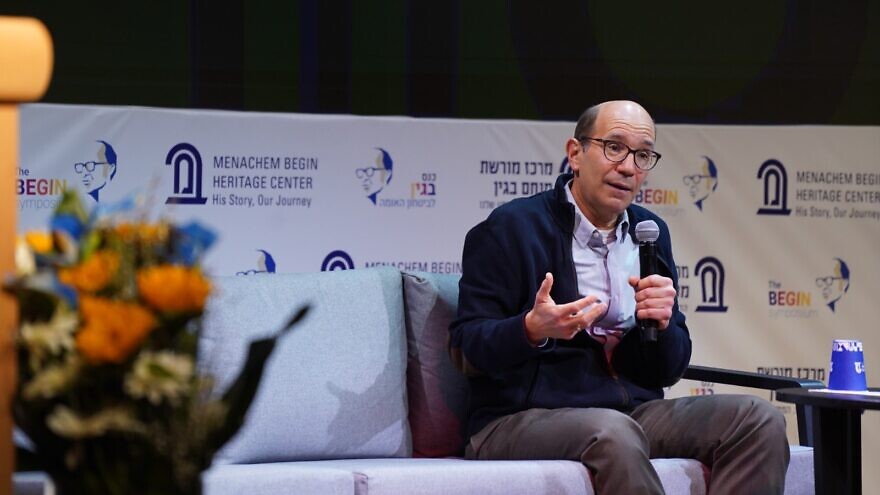 (March 14, 2022 / JNS) American-Israeli professor Gil Troy called on Israeli Prime Minister Naftali Bennett to “give us some vision” on Monday at the Menachem Begin Heritage Center in Jerusalem.

In an interview with JNS CEO Alex Traiman, Troy said that the current prime minister is doing a good job at being “tactical” in his approach to managing the government and the State of Israel. But Troy told Bennett: “If you don’t also dream, think a little ahead and think where we want to go, we will get nowhere. That would be my blessing from Menachem Begin to Bennett.”

The Begin Symposium, which ran from March 13 to 14, was titled “Securing the Nation” and focused on the legacy of the late prime minister, who served from 1977 to 1983.

An American presidential historian, Troy has become a popular commentator in Israel and abroad on topics relating to Israeli politics. He coined the phrase “muscular moderates” and said Monday that this is what the country and the world needs.

“A margarine centrist says the right and left attack me, so I am in the center,” he said, adding that “marshmallow centrists” are afraid to stand up.

“What we need today are muscular moderates who speak for the silenced majority,” he said. “They don’t want to be extreme right or left, and they don’t feel represented in the Twitter-‘dumb.’ ”

He said that “Begin 101” is to be “rooted in your values, your story, your identity and your ideals. To have a sense of where you want to go, and to understand that at any moment in time your job is to compromise.”

He also noted that a modern leader needs vision, good eyes and a backbone, and then needs to reach to both sides of the aisle. “Begin did this from the opposition and when he led the Knesset,” said Troy. “The only way a bird can fly is to have a right-wing and a left-wing.”