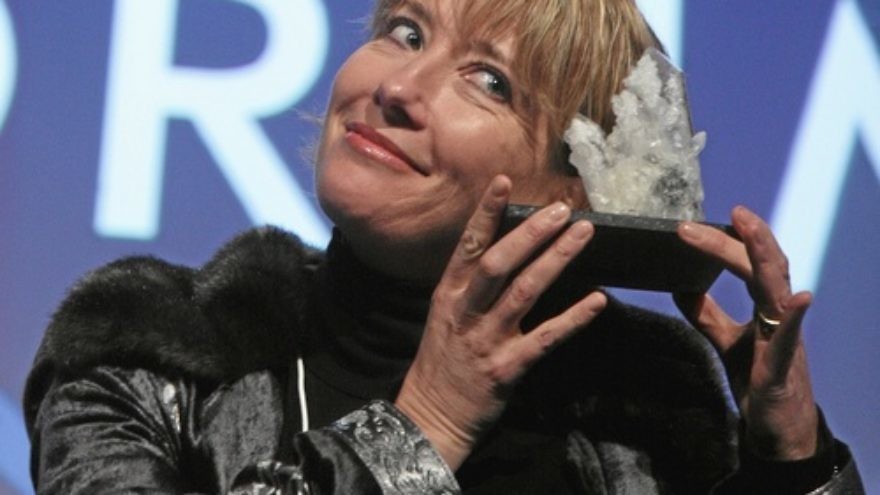 Click photo to download. Caption: Actress Emma Thompson presents the award she was given during the "Presentation of the Crystal Award" at the annual meeting of the World Economic Forum in Davos, Switzerland, in 2008. Credit: World Economic Forum.
Republish this article
651 WORDS
Spread the word.
Help JNS grow!
Share now:

The Jan. 27 passing of Pete Seeger got me thinking about you. That may seem a little surprising; there’s no obvious connection between a banjo-strumming American folk singer and a British Oscar-winning actress. So let me explain.

The obituaries for Mr. Seeger noted that in the 1930s and 1940s, he had been a supporter of Soviet dictator Josef Stalin. But in 1993, Seeger publicly apologized for, as he put it, “following the party line so slavishly, for not seeing that Stalin was a supremely cruel misleader.”

It’s a shame that it wasn’t until 40 years after Stalin’s death that Seeger finally acknowledged the truth about his former idol. I am hoping it won’t take you 40 years to acknowledge the terrible mistake you have made in publicly urging a boycott of Israelis.

You publicly called on London’s Globe Theater to cancel its invitation to the Israeli theatre company Habima to take part in a Shakespeare Festival. You and your colleagues asserted that “by inviting Habima, the Globe is associating itself with the policies of exclusion practiced by the Israeli state.” Allowing Israelis to perform would make the festival “complicit with human rights violations,” you claimed.

I know a little something about human rights violations—such as the violation of my daughter Alisa’s right to live. In 1995, Palestinian Arab terrorists associated with the Islamic Jihad movement decided to practice their brand of “exclusion” by bombing the bus on which Alisa was riding. Eight innocent people were murdered, more than 50 were injured. The U.S. State Department publicly identified five of the killers. To this day, they live freely in the territories controlled by the Palestinian Authority.

Ms. Thompson, please understand me. I am not saying that actors should refrain from taking stands on political issues. But I am directing your attention to the fact that on so many occasions, actors and other entertainers who have injected themselves into public controversies have ultimately proven to be badly mistaken, as the case of Pete Seeger demonstrates.

Many prominent Hollywood figures took part in the 1950s McCarthyite witch-hunts. They said they were defending American culture against radicals. But they didn’t mind slandering innocent people in the process.

Harry Belafonte is a wonderful entertainer. But his support for Cuban dictator Fidel Castro and Venezuela’s Hugo Chavez was reprehensible. And his racially charged attacks on African-American Secretaries of State Colin Powell and Condoleezza Rice were vile.

Sean Penn is a talented actor. But his embrace of Saddam Hussein was disgraceful. Whatever one thinks of the Iraq war in retrospect, who can deny that the world is better off without Saddam?

When we look at the brutal dictatorship that rules Vietnam today, when we think about the countless innocents slaughtered by that regime, it is impossible not to resent Jane Fonda’s support for the Vietcong. At least the folksinger Joan Baez, who once vocally supported the North Vietnamese, eventually had the decency to repudiate them—but, once again, only after it was much too late.

That, Ms. Thompson, is what I fear will happen to you if you throw in your lot with the haters and boycotters of Israel. The radical chic that is so appealing to you today will be revealed as a horrible mistake soon enough. You will, eventually, recognize the true nature of the tyrants and terrorists of Hamas and the Palestinian Authority. But how much must Israel suffer until you, like Pete Seeger and Joan Baez, finally stop romanticizing dictators?

Yes, there are evil regimes that deserve to be boycotted. The apartheid regime of South Africa deserved it. So do the terrorists who rule Gaza. But democratic, peaceful, egalitarian Israel does not.

New Jersey attorney Stephen M. Flatow is a frequent commentator on Middle East politics, terrorism, and victims’ rights. His daughter, Alisa, was killed in a Palestinian suicide bombing in 1995.