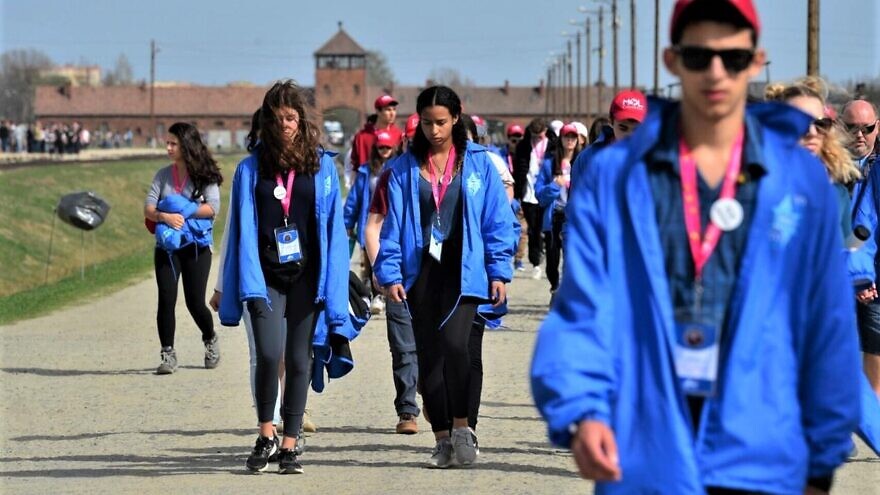 (April 27, 2022 / JNS) POLAND—The International March of the Living will take place in Poland on April 28 following a two-year hiatus due to COVID-19. Despite the ability to gather in person, organizers say they now face a much greater challenge.

“The reality is that the generation of the Holocaust survivors is fading,” Shmuel Rosenman, chairman of the organization and one of the event’s founders, told JNS.

March of the Living conducts educational events year-round aimed at combating anti-Semitism. Its flagship event is a weeklong educational trip in Poland that culminates in a 1.9-mile walk from the concentration camp at Auschwitz to the extermination camp at Birkenau, symbolizing the death marches that took place there in 1945. The march, which falls yearly on Israel’s Yom Hashoah, or Holocaust Martyrs’ and Heroes’ Remembrance Day, relies on the participation of actual survivors to help preserve the memory of the Holocaust’s 6 million Jewish victims.

“It is our job to ensure that their voice and their memory never dies out,” stressed Rosenman, noting that the reality is, this year “we have just eight survivors able to lead the march. The passing of the flame to the next generation is an urgent cause.”

March of the Living has made that cause its central theme. Its website warns, “Each day we witness more Holocaust survivors passing away. Each day we face their stories becoming faded memories. Each day we face a rise in Holocaust distortion and denial. We must prevent history from being rewritten. We must keep the lessons of the Holocaust alive. We must fight against antisemitism and all forms of hatred.”

In a statement put out by his organization on Wednesday, Rosenman warned that “we’re on the last grain of sand.”

Along with the survivors, this year’s march will be accompanied by various delegations, including one made up of Ukrainian refugees; one comprised of victims of anti-Semitism; and for the first time, a delegation from the United Arab Emirates. Also marching will be Poland’s president, Andrzej Duda.

Said Rosenman: “With the shadow of war once again hanging over Europe, and Poland hosting millions of refugees from the ongoing war [in Ukraine], President Duda’s participation pays tribute to the memory of the victims of the Holocaust and will serve as a clear statement against the dangers of anti-Semitism, hatred, racism and intolerance.”

Some 2,500 people from about 25 countries are expected to participate.