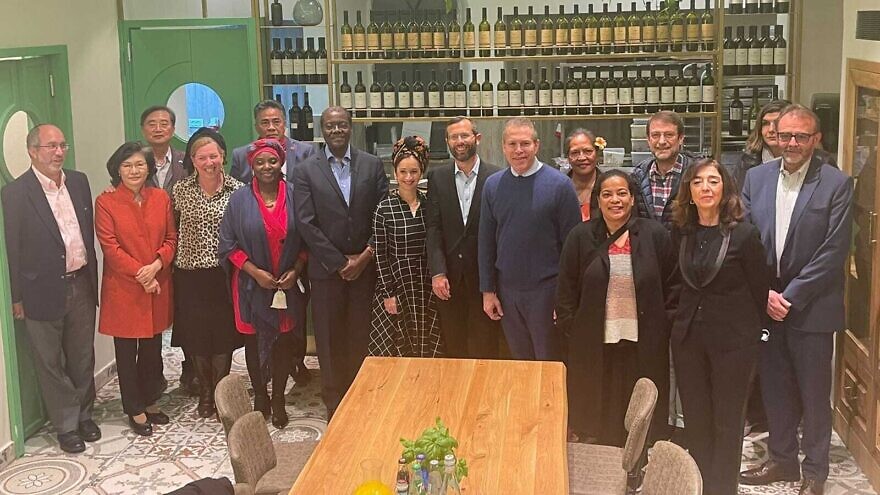 (December 21, 2021 / JNS) Israeli Ambassador to the U.N. Gilad Erdan is currently hosting his counterparts in Israel in order to familiarize them with the country. The 12 ambassadors came with their spouses as guests of Erdan.

As part of their visit, the envoys held a long meeting Sunday with Binyamin Regional Council Governor Israel Ganz, whom Erdan had invited to speak about the development of the Jewish towns and villages and life there. The U.N. ambassadors were from Albania, Argentina, Bulgaria, Croatia, Ecuador, Hungary, Nauru, Palau, Samoa, South Korea, Uruguay and Zambia.

The meeting lasted about two hours, during which the ambassadors displayed interest in the Jewish towns and villages in Judea and Samaria. Ganz showed the visitors data on the development of the towns and villages, and explained that a two-state solution is not viable.

“Whoever talks about the two-state solution is not up to date. Preserving stability in this region will require other solutions. You play an important role in that. When you discuss the establishment of a Palestinian state, that plants false hope among the Arabs and they increase their violence and acts of terror against us,” said Ganz.

Ganz detailed the development of infrastructure in the Judea and Samaria region and called on the U.N. members to help him in developing the roads and highways.

“I am promoting the paving of roads that will improve life for the entire population. Why do I have to be faced with obstacles? You should be helping me and being partners in this work. I call on you to be more active and to create joint efforts,” he said.

The escalation in the security situation in Judea and Samaria was also discussed. Ganz told the ambassadors, “The silence of the countries and the international community serves as a tailwind for Arab terror. We are not hearing any countries calling on the Arabs to desist, giving them the feeling that they have your support. The Palestinian Authority feeds off of this silence and encourages the terrorists, and we are paying the price, in the victims and their destroyed families.”

Ganz also warned against the libels spread by radical leftist organizations against Jewish residents of Judea and Samaria, and said that most of the material the ambassadors have received from those organizations is based on lies and incitement against those residents.

The ambassadors held a very positive conversation with Ganz and thanked him for their first opportunity to hear about the reality on the ground from a primary source. “We were deeply impressed by your connection to the land,” they said in a statement. “We are leaving here wiser and this was a very valuable meeting for us.”