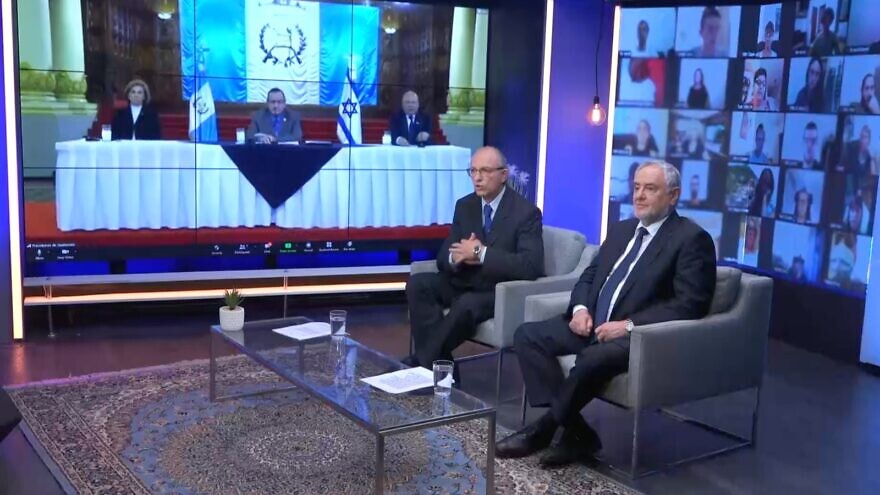 (August 5, 2021 / JNS) The Guatemalan president and regional Parliamentarians convened virtually on July 29 to display a united front against anti-Semitism and celebrate ties with the Jewish state.

At the inaugural Central America Forum for Israel, the leaders issued a joint declaration calling for a united stance against surging global anti-Semitism, including support for the International Holocaust Remembrance Alliance (IHRA) working definition of anti-Semitism, expressing solidarity with the State of Israel following its recent conflict with Hamas in Gaza and urging for more decisive action against Hezbollah.

The forum also marked the third anniversary of the proclamation of Guatemala’s Israel Friendship Law, which institutes that Guatemalan schoolchildren learn about Israel and its historical relations with the Republic of Guatemala.

Earlier this year, Guatemala’s Congress adopted the IHRA definition, and the country’s Parliament demonstrated strong support for Israel during the most recent conflict with Hamas in Gaza, passing Resolution 042021 condemning Hamas for its rocket attacks against Israel.

Ahead of the forum, president of the Israel-Guatemala Parliamentary Friendship League, Fidel Reyes Lee, told JNS, “This is a window of opportunity to present to the world the vision of this region, united by ties and a common history.”

He underscored the particular importance of the Republic of Guatemala as the historical leader in matters of diplomatic relations with Israel, maintaining that “this relationship can be multiplied and reproduced at the Latin American level.”

Parliaments, he further explained, are playing an increasingly important role in diplomacy. “This has been shown by the Guatemala Israel Parliamentary Friendship League, the largest of its kind, which has to date brought together 82 deputies and promoted the relationship between the two nations in Congress, such as instituting the Israel-Guatemala Friendship Day.

Beyond diplomacy, added Reyes Lee, “Israel is a benchmark for development and industrialization, for democracy and freedom in this important region, despite resource limitations and scarcely 70 years of national independence. In contrast, Central America, which is characterized by its richness and biodiversity, as well as two centuries of independence, has not yet reached the level of human development enjoyed by the population of Israel. Therefore, there is still much to do so that Israel becomes the best commercial partner for this region, and so that we are able to reach development agreements that benefit both peoples economically, politically and culturally.”

Organized by the Combat Antisemitism Movement (CAM), the Center for Jewish Impact, the Congress of the Republic of Guatemala, the Guatemala-Israel Friendship League and the Jewish community of Guatemala, participants included senior parliamentarians, religious leaders and communal figures from Israel, Guatemala, Honduras, El Salvador, Costa Rica, the Dominican Republic, Panama, Nicaragua, the United States and Israel.

‘Education a crucial tool in fighting anti-Semitism and bigotry’

The forum occurred in the context of rising anti-Semitic hate crimes, including physical attacks and vandalizations of synagogues. Organizers reported an unprecedented rise in online racist abuse directed at the Jewish people and the State of Israel, with Israel’s very existence being questioned.

Roberg Singer, chairman of the Center for Jewish Impact, maintained that in Central America, however, general anti-Semitism is “considerably low and almost non-existent, especially in the countries that participated in the forum.”

“There is a genuine affinity for Judaism stemming from the evangelical [Christian] beliefs that have taken hold throughout the region,” he told JNS. The few instances of anti-Semitism in the region “seem to be either remote or come from countries like Venezuela that provide material and political support to explicitly anti-Semitic and anti-Israeli organizations like Hezbollah.”

During the forum, Israeli Foreign Minister Yair Lapid emphasized, “We stand shoulder to shoulder in the fight against global terrorism. One key step is banning Hezbollah, all of Hezbollah, and I am thankful for those who have taken the step and call on every country to follow suit.”

Lapid thanked Guatemala for its historic support for Israel, as well as the forum’s participants from across Southern, Central and North America, noting, “We are grateful for the recognition of Jerusalem as our eternal capital. It was an honor to open the embassy of Honduras in Jerusalem alongside President [Juan Orlando] Hernández.”

He also spoke of the deep cooperation between Israel and countries of Latin America, and of his pride that Israel had been able to share its innovations in agriculture, water, health care and education, training thousands of people from South America through the Foreign Ministry’s MASHAV program.

Guatemalan President Alejandro Giammattei echoed, “We declare Hezbollah to be an enemy of the State of Guatemala and hope we never receive any investment which might come from groups or countries aligned with Hezbollah.”

He also spoke of the historic friendship between the Jewish and Guatemalan peoples, and of the strong bilateral ties that date back to Israel’s earliest days. He expressed appreciation to Israel for the aid it provided to Guatemala after the Eta and Iota hurricanes last year, as well as the vaccines the country received from Israel that have been used to inoculate medical staff against COVID-19. He reaffirmed his commitment to remembering and educating about the Holocaust.

Further reflecting on Guatemalan support for Israel, Singer noted, “As someone who has dedicated much of [my] professional life to Jewish education, it brings me great joy to know that the Guatemalan educational curriculum will incorporate such a pivotal moment in Jewish history. Education is a crucial tool in fighting anti-Semitism and bigotry, both of which we see growing exponentially in Europe and North America. We believe that many other countries in the region recognize the threat of anti-Semitism and will likely follow Guatemala’s example.”

Other speakers highlighted the shared values of self-determination, freedom and democracy underpinning Israel’s relationships in Central America and reinforced alliances in the region.

“This forum is a celebration of the strong relations between Israel and Central America and of how far we’ve come,” said Singer. “Central American countries supported the establishment of the State of Israel, a bond between peoples that lasts until today. For Jews, this is a reminder that even with everything that is happening, we are not alone, we have allies who unequivocally stand for Israel and fight against anti-Semitism. For Central American countries, it is an affirmation of a special relationship centered around shared Judeo-Christian values and a chance to solidify a relationship that has produced tangible humanitarian and economic benefits. But, most importantly, they know that they are in the right by being firm allies of Israel. “