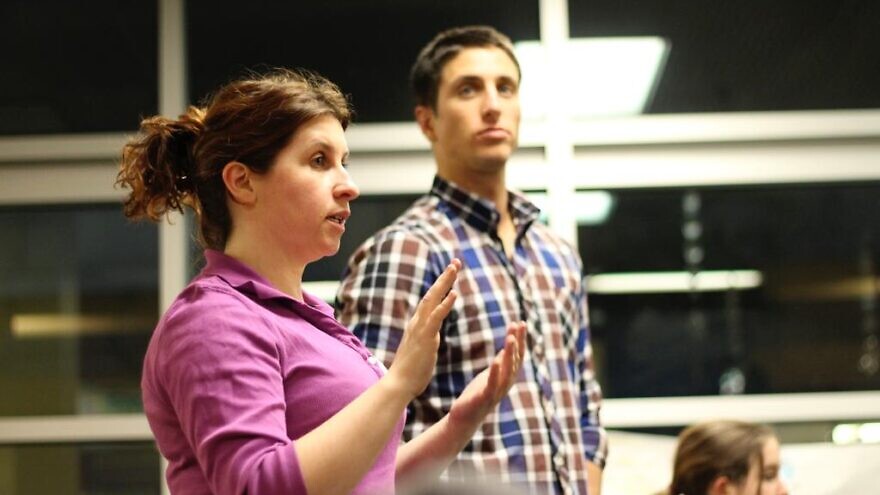 (December 27, 2021 / JNS) Ten years ago, Masha Merkulova was a single mom working full-time as a labor-and-delivery nurse. The furthest thing from her mind was spark-plugging a national organization to draw young Jews closer to their people and their homeland.

But when her 7th-grader came home from Sunday school talking about a movie they’d seen with a crying Palestinian girl and hate-spewing religious Jewish boy, “I was absolutely stunned,” Merkulova says. “This film, which was endorsed by NPR for use in schools, was so clearly anti-Semitic and anti-Israel, and they were showing it in our synagogue, which I’d thought was a safe space for my child to learn to love his Judaism.”

“And I realized then that, maybe a generation ago we could just teach prayers and holidays in our religious schools, but the way the world is today, we can’t afford that anymore.”

Merkulova, however, was unwilling to wait for a year-long synagogue committee process to come up with a program to grow students’ personal relationship with Israel. “We needed a curriculum right then,” she says. “Within two days I’d found one.”

It was in that moment of cognitive dissonance that Club Z was born. Within two months Merkulova had her first group of three of her son’s friends learning together about the history of Israel. The trio would be the first class of Club Z, a two-year program inviting teens to bond with their birthright: Jewish wisdom and history, the Jewish homeland and each other.

In addition to Merkulova’s own Bay Area community, chapters have sprung up in Los Angeles; Charlotte, N.C.; New York; and now the newest pilot in Boston. Club Z is also extending its online reach for those teens without a local chapter.

Bay Area teen Dan Gotesdyner came by his Club Z involvement naturally – his older sister had been a member a few years earlier. By sophomore year Dan had jumped in with both feet. “Everything I’ve learned at Club Z has given me the knowledge I need to defend Israel and the Jews and also the confidence to take on attackers,” says Gotesdyner, who’s now a senior. “You have to be willing to be different and even alienated from the other kids and sometimes even your teachers, which can be hard. But in the end, what people respect is passion and standing your ground for your people and your homeland. When you’ve got that, it gives confidence to other Jewish kids.” 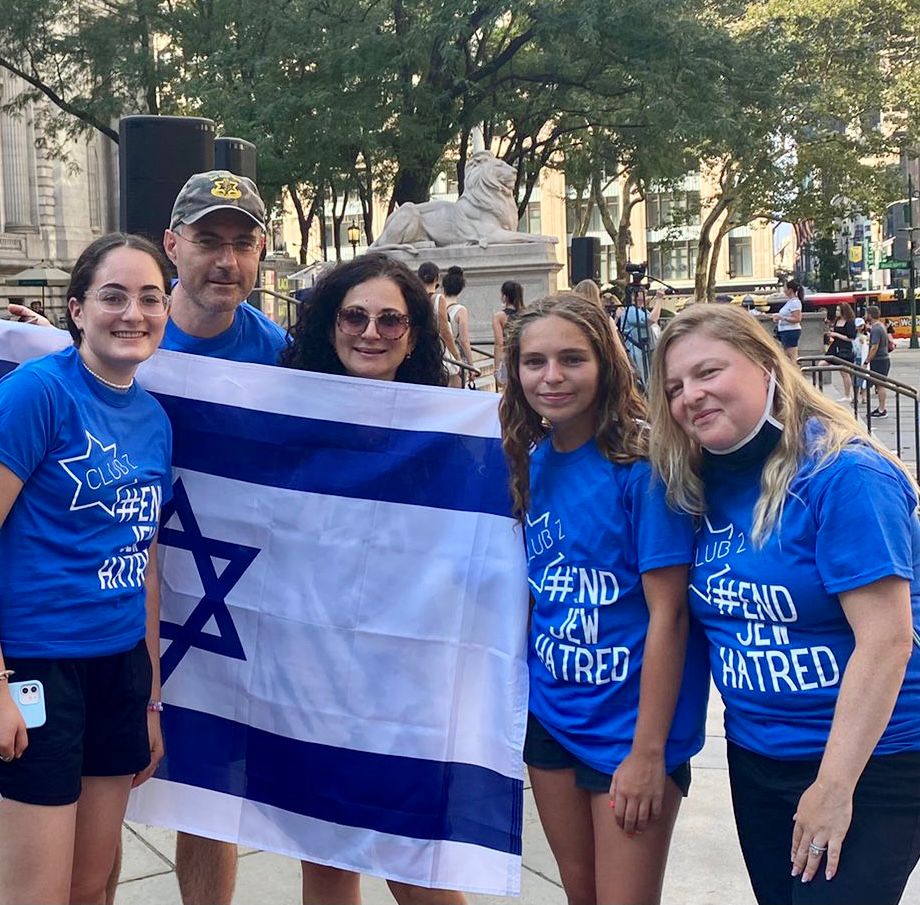 Some 3,000 miles to the east, Eva Shrayer was passed an anonymous note in class with a swastika and the words “Join the Third Reich.” Two years later she’s an active member of the Westchester Club Z chapter in New York. In fact, her family members were among those who helped get it off the ground.

“My parents were born in the Soviet Union, so they have a personal understanding of anti-Semitism … and they didn’t want it to happen to me,” says Shrayer. “They can see what other American parents who never lived with it can’t.”

Merkulova says growing up in the former Soviet Union gives her unique insight into how easily repression and anti-Semitism can take hold. “We were raised with the understanding of the dangers of anti-Semitism from bitter experience, so we knew that, if we don’t care for our own people – our own family — no one else is going to do it for us.” 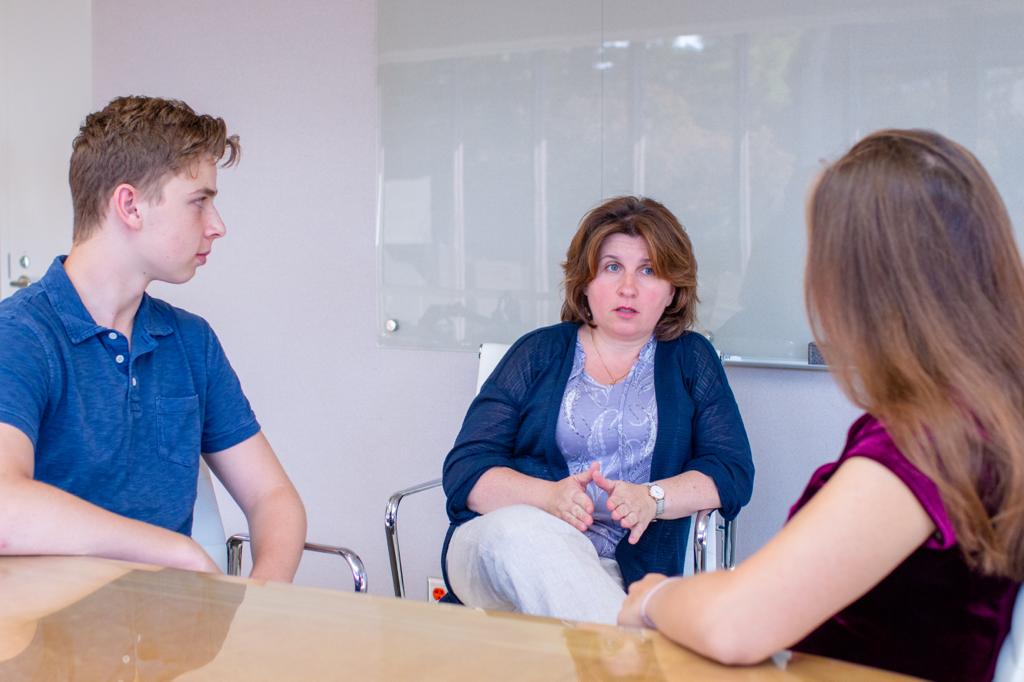 For instance, she says, “If your kid gets hit by a bully, you may tell them to report it to the teacher. My dad taught me if someone hits me, hit them back hard enough that they’ll never do it again.”

Rabbi Abraham Cooper — associate dean of the Simon Wiesenthal Center, which often partners with Club Z on training and webinars — says he is “seeing these young Jews learning to stand up for their rights, their people and Israel, especially those whose parents grew up in the Soviet Union where they experienced how difficult and demeaning it was to be a Jew.…These kids are teaching the other Jewish teens not to be afraid to stand up and be counted, because the hatred has not changed since the Soviets, only the packaging has.”

Russian-American Jews also tend to have strong bonds with Israel, Merkulova adds. “Most of us have close relatives there. Only a generation ago they went to Israel and we came here, so for us they’re very much mishpacha – family. And we continue to share a commitment to self-rule for the Jewish people through the re-establishment of our homeland in the land of Israel.” 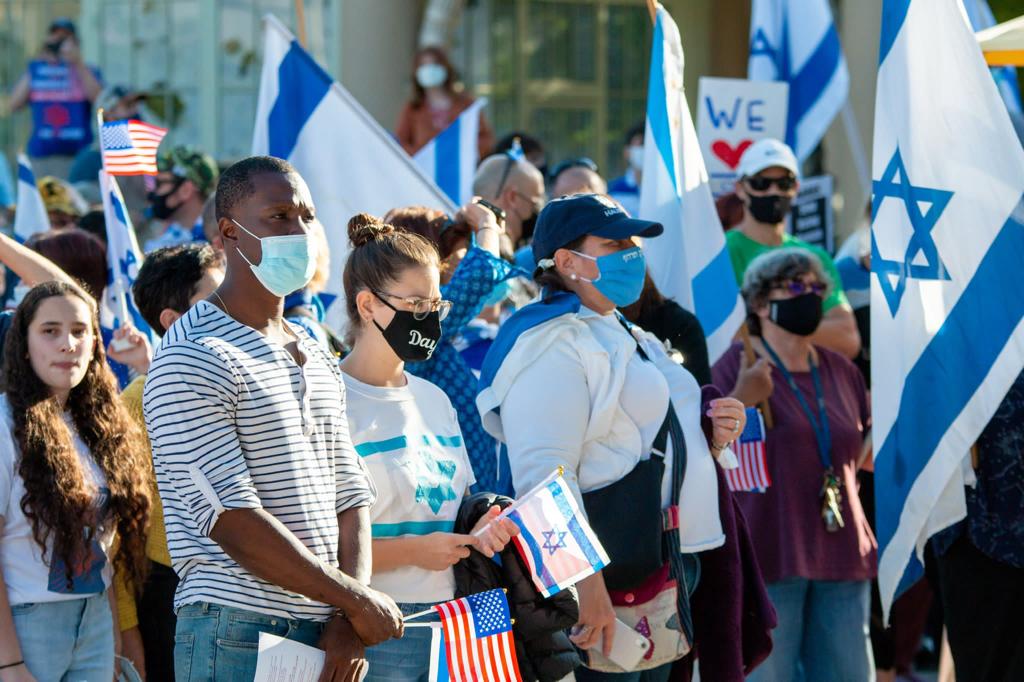 A Club Z rally standing with Israel during the Gaza war in May 2021. Credit: Courtesy.

A new generation of leaders

Club Z stresses to its members, “You’re not future leaders, you’re already leaders,” reminding them that the commanders of the Israeli army in 1948 weren’t much older than they are now.

A different kind of courage is required today, Merkulova explains. When a member wore her Club Z sweatshirt to a school sporting event, a teammate spotted the map of Israel printed on the front and said, “You’re a Zionist? You must eat Palestinian babies for breakfast.”

“Yes, the hate can be frightening and isolating,” Merkulova acknowledges. “Kids naturally want to be like — and be liked by — their peers. But having the courage to stand up when something is wrong and to know they deserve to be treated with respect is ultimately strengthening. And it helps knowing we’ll always have their back.”

Initially, the Club Z mission did not particularly appeal to Gabrielle Usvyat. But when her best friend recommended she attend a Zoom meeting for the group, the Bronx High School of Science junior was hooked.

“Discussing and debating are a huge part of the learning,” Usvyat says. “You hear what the educators say and what other kids think, and you build your own opinions.” 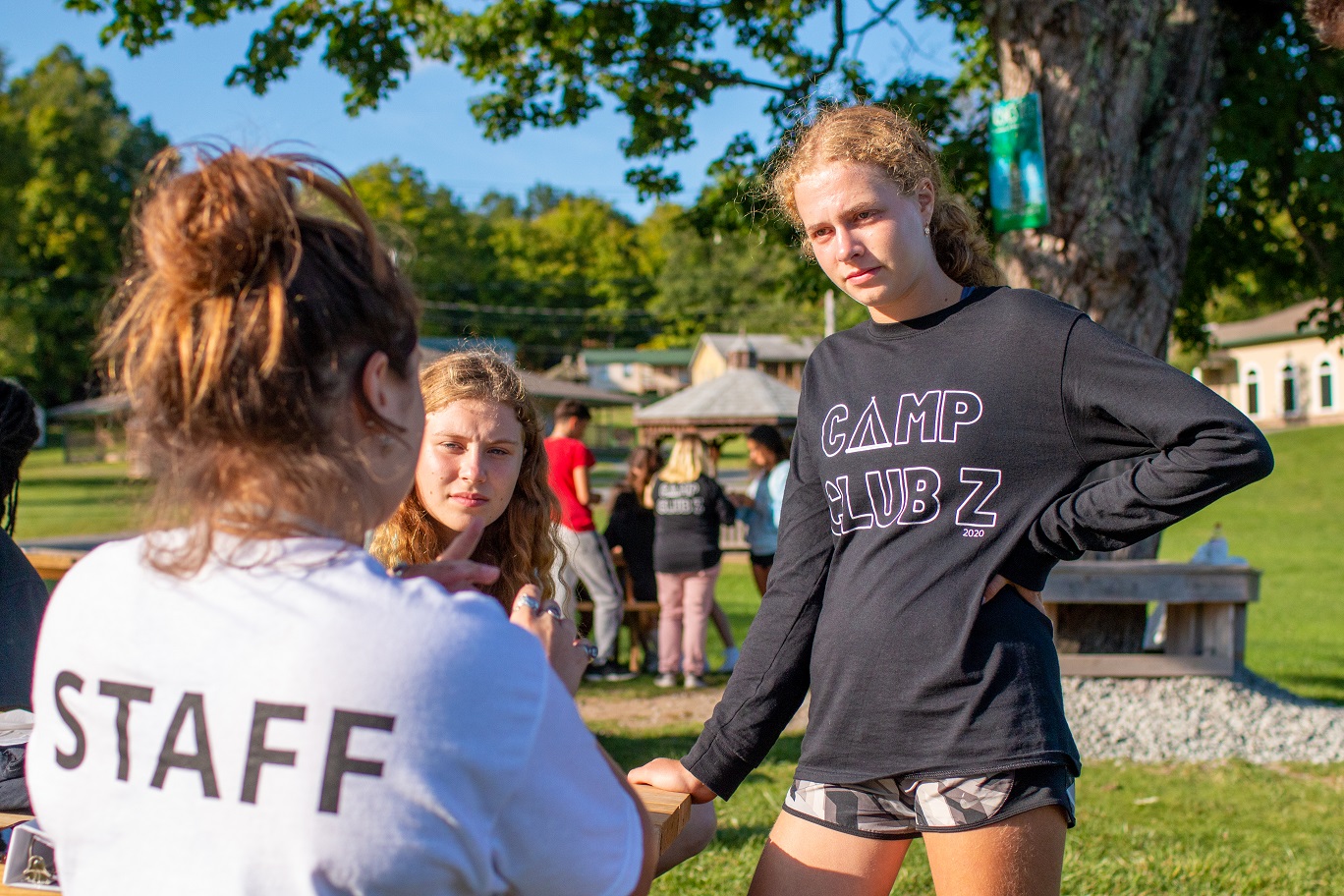 Gabrielle Usvyat at a Club Z “getaway,” listening to one of the educators describing the antisemitism she faced in college. Credit: Courtesy.

The parents of Club Z members are often cheering from the sidelines. “First my daughter and now my son have been enriched and empowered by their Club Z experiences,” says Dan Gotesdyner’s mom, Israel native Meira Gotesdyner, who now lives in the Bay area. “Intellectually, socially and in their Jewish identity, it’s given them both the tools they would never have had otherwise had to fight back with knowledge and confidence.”

Usvyat would like to attend a college free of anti-Semitism, “but I’m not sure it exists anymore,” she says with a sigh. “I know there will be times when it hurts but as long as I know what I stand for, I’ll be OK. At Club Z we learn to think fast and on our feet.”

“Before, if anyone would ask me if I’m Jewish, I’d say ‘yes’ but I was never proud of it,” she says. “Now I feel more comfortable and confident as a Jew. I notice everything on social media that’s anti-Israel and anti-Semitic, and I know I’ll be able to refute these lies when I have to face them.”

For Eva Shrayer, the Club Z advantage is being empowered to deflect any propaganda. “If I hear a professor’s anti-Israel line, I’ll recognize it as a lie,” she says, adding, “Now I can back up my feelings with facts. It’s a good thing we have Club Z in high school so we can strengthen our identity and learn our history before college.”

As a future attorney, Sam Wolf is looking forward to taking on the anti-Israel arguments at Harvard Law School next fall. The Bay Area native, now 23 and spending the year in Israel learning at a yeshiva and working, was among the three teens in Club Z’s first class in 2011. 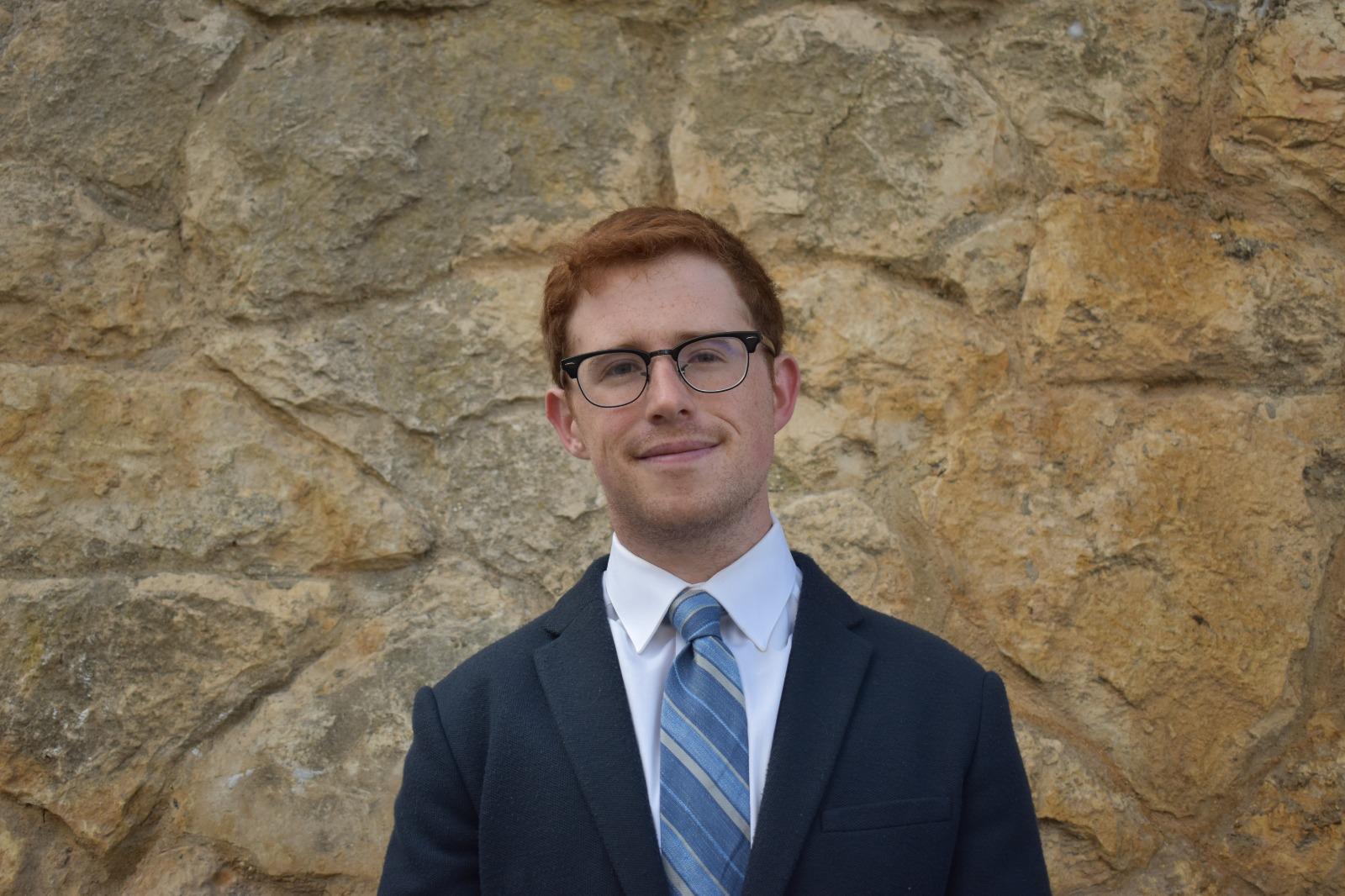 Sam Wolfe, an aspiring attorney who will be attending Harvard Law School next year. Credit: Courtesy.

“I doubt I would be in Israel now or going to law school if not for Club Z,” he says. “It made me ask myself, ‘What does it mean to be a Jew, to be part of this people?’ And it instilled in me — in us all — the pride and courage to lead when no one else will, adopting the strength of the Russian Jews.”

Tammi Rossman-Benjamin, co-founder and director of AMCHA Initiative, which combats anti-Semitism at U.S. colleges and universities, believes that “we’ve let the ball drop for these kids because by [the time they reach campus] it’s almost too late.”

“If your Jewish education stops after bar or bat mitzvah, you’ll always view Israel and Judaism from a child’s perspective,” she says.

Yet Club Z, says Rossman-Benjamin, “is all about character-building and developing a real love in their hearts for this incredible people, history and homeland years before they arrive on campus. Simply put, Club Z helps build strong, proud Jews.”

‘We can’t sit back passively’

Merkulova tells of one Club Z member – an 11th grader enrolled in a local community college – whose history teacher taught that Kristallnacht was “a battle that impacted American lives and started the action against Germany.”

Stories like this keep Merkulova up at night. “We can’t sit back passively and watch Jewish kids get sucked into our enemy’s narrative,” she says. “We must let this new generation know in no uncertain terms that they are personally connected to generations of our people — and to each other — by our shared history, our shared homeland and our shared destiny.” Her five-year plan? To double – or triple — the number of chapters and “for every Jewish teen to know it’s cool to be a Jew and cool to be a Zionist.”

And that’s never been more important than it is today, says Rabbi Cooper over at the Wiesenthal Center: “Club Z can spark in our teens that Zionism is not a dirty word but our people’s beautiful historic destiny that their generation can grow into a powerful cohesive force to build and secure the Jewish people’s future.”

It’s something that at least one member has already put into action. After the 11th-grader set the teacher who promoted a false narrative on Kristallnacht straight, he agreed to turn over one class to her to educate her fellow students about the Holocaust, anti-Semitism and anti-Zionism. “This,” says Merkulova, “is what it’s all about.”

“Teens push boundaries – that’s what we do,” says Dan Gotesdyner. “So who better to challenge the hate against Israel than those of us who couldn’t care less for the status quo? We all know that fighting our enemies is an uphill battle,” he adds. “But it’s our uphill battle.”