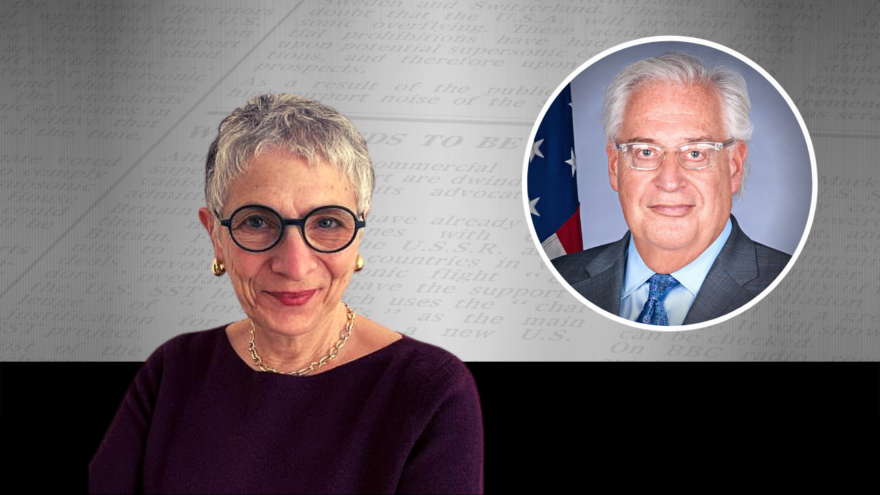 (July 14, 2022 / JNS) In this week’s “Top Story,” guest host Melanie Phillips meets with former U.S. Ambassador to Israel David Friedman to discuss U.S. President Joe Biden’s arrival in the Middle East, and Friedman has his own version of how the president should have managed the trip.

Friedman says that America is still the strongest country in the world and should not be afraid.

“Would Biden deliver that message? Of course not… And that’s the problem with the Saudis and all the other countries in the region, including Israel, they’re looking to America. And they’re saying, has America lost its ability to lead the world?”

He said the greatest risk to Israel and the world is that America is not America anymore.

“I could write Biden’s speech,” Friedman contended. “But I don’t know that Biden could deliver it or, if he did, if anybody would believe him.”

Friedman and Phillips review the reasoning behind this trip, and Biden’s primary objectives.

Topics of discussion include economic incentives for America in the region, Israeli relations with Saudi Arabia and U.S. support of the Palestinian government.

Friedman contends that the true purpose of Biden’s Middle East tour is to lower the price of gasoline in the United States before the upcoming midterm elections.

“If that’s the case, it’s enormously degrading to the credibility and prestige of the United States,” he said.

The two also discuss the Abraham Accords and the potential for Saudi Arabia to “come on board eventually,” as Phillips phrased it.

Friedman believes the key to Israel and Saudi Arabia normalizing ties is American facilitation. But in order to do this, Friedman added, America needs to build trust with the Sunni nation, something it can only do by entirely and indisputably disavowing Hamas and Hezbollah. America would also have to completely end any involvement in Yemen, Iraq, Syria and Lebanon.

“The reality is money is fungible,” Friedman explained. “If they throw it at a hospital, that’s money the Palestinian Authority can spend on someplace else. In most cases, paying terrorists. So it’s not as innocuous as people think.”

How to keep Iran in check

“Here we have a regime which declared war upon the west, on America,” Phillips said. “Until this very moment, why has the West been so reluctant to act against Iran?”

Friedman expressed his belief that Iran can become even more malign, which he believes can be prevented through giving Israel weaponry and defense systems.

“To keep Iran in check, all the roads run through Israel, not through America,” Friedman said.

The ultimate goal, according to Friedman, is definitive U.S. stances, which can heal “terrible fractures” between Israel, America and the Middle East’s major players.

“A lot of people want to heal this rift… If we don’t, we’ll find our children and grandchildren living in a world that we don’t want for them,” he said.