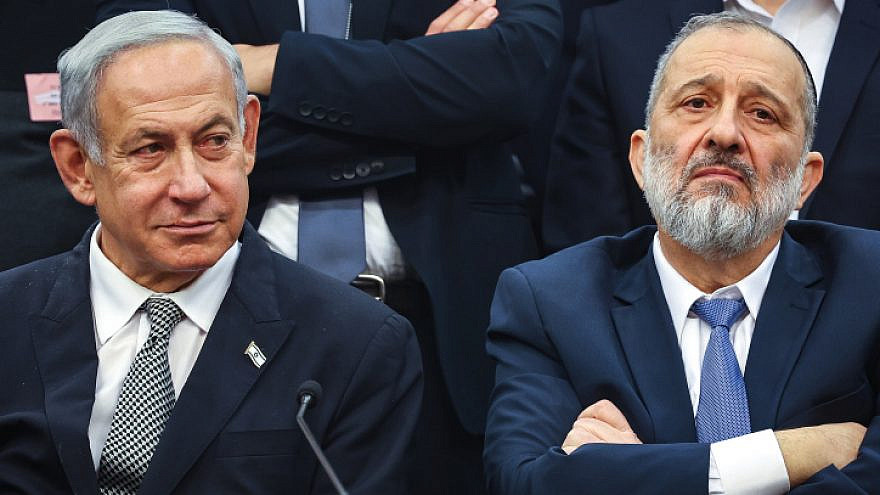 (January 23, 2023 / JNS) Coalition lawmakers gathered at a Shas faction meeting at the Knesset in a show of support for party chairman Aryeh Deri on Monday.

Prime Minister Benjamin Netanyahu dismissed Deri from the Cabinet on Sunday, in accordance with a Supreme Court ruling canceling his eligibility to serve in a ministerial role.

“We will return the ballot to the people who voted for us,” said Deri in his first public remarks since the Supreme Court’s decision, arguing that it had overturned the will of 400,000 Shas voters, who had expected him to serve as a minister in the Netanyahu government.

Deri criticized the Supreme Court’s justification for its ruling (the court said his ministerial appointments were “unreasonable in the extreme” due to a prior tax fraud conviction).

Said Deri, “The Knesset appointed the government. Where is the ‘unreasonableness in the extreme’ of Israel’s Knesset?…Are 11 or 10 judges more reasonable than 63 Knesset members [in the coalition] who were lawfully elected?…How is it possible to cancel the will of the nation and the will of the people?”

Despite his strong disagreement with the Supreme Court’s ruling, Deri said he and Netanyahu would abide by its decision.

His words were greeted by applause.

Speaking in support of Deri at the meeting were Netanyahu, United Torah Judaism Chairman Moshe Gafni, Otzma Yehudit Chairman Itamar Ben-Gvir, Minister of Justice Yair Levin of the Likud Party, Speaker of the Knesset Amir Ohana also of Likud, and others.

“Harm has been done to the principle of the will of the majority, and we must fix this,” Netanyahu said on Monday alongside Deri

“It’s the wrong decision…and it forced us into a situation in which Aryeh Deri is not leading as a minister in the government,” he added. “We haven’t come to put an end to democracy,” Netanyahu said. “We’ve come to save democracy. What is democracy? Rule of the majority and respect for individual rights.”

On Sunday, Netanyahu said that “with a heavy heart” he must remove Deri from his cabinet-level positions.

In his letter of dismissal, the prime minister wrote, “As you know, I decided to appoint you as vice prime minister and minister of the interior and health with the approval of the majority of Knesset members due to the fact that I see you as an anchor of experience, wisdom and responsibility that are important to the State of Israel at all times, and especially at this time.”

The Supreme Court issued the ruling despite a Knesset amendment passed in December to allow Deri to serve as a minister. The amendment specified that a ban on persons serving as ministers for seven years if convicted of a criminal offense applies only to those serving active jail sentences. Deri was handed a suspended jail sentence as part of a plea bargain on tax fraud last February. The law had been unclear on whether the seven-year ban applied to suspended sentences.

“This unfortunate decision ignores the will of the people, as reflected in the great trust that the public gave to the people’s representatives…when it was clear to everyone that you would serve in the government as a senior minister,” wrote Netanyahu.

The Deri decision comes against the background of a political battle surrounding the Netanyahu government’s judicial reform plan, which aims to curtail what it says is judicial overreach. The plan would give the Knesset the ability to overturn court decisions that cancel laws, allow elected officials greater influence in selecting judges, and reduce the power of legal advisers attached to government ministries.