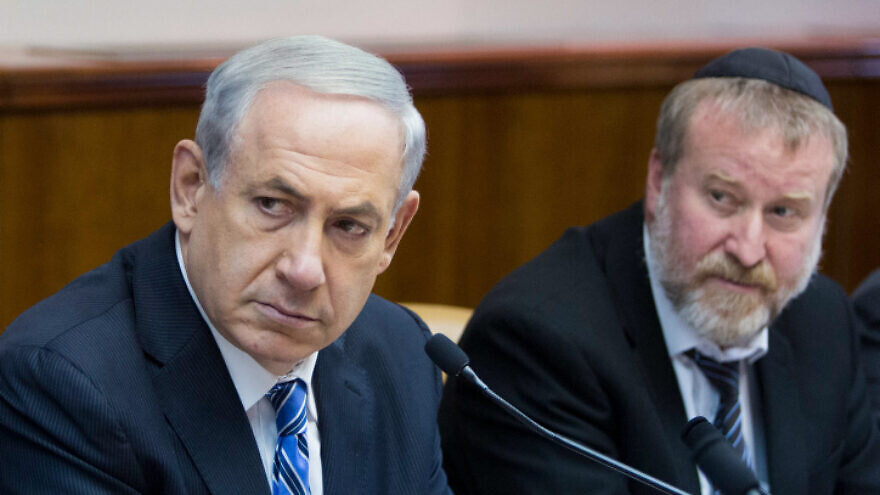 (November 18, 2019 / JNS) As Israel approaches what would be its third election in less than a year, many Israelis and international observers are questioning the sustainability of the country’s complicated parliamentary system. Yet at the heart of Israel’s current political impasse lies not only its system of government, but also its justice system.

Attorney General Avichai Mandelblit is expected to decide in the coming weeks whether or not to issue formal indictments in three separate cases against Israeli Prime Minister Benjamin Netanyahu. In Case 1000, Netanyahu is accused of receiving gifts worth over $200,000 from friends over an extended period, while Case 2000 and Case 4000 both involve alleged attempts by Netanyahu to secure positive media coverage in exchange for political favors.

That Netanyahu has not yet been forced to resign by his Knesset colleagues (the law does not require his resignation even if formally indicted) and that he remains the strongest politician in the Israeli political system remains a testament to his 13-year track record of transforming Israel from a resource-poor developing nation into a technology and energy exporter, and regional military superpower.

Yet it is also a testament to Israelis’ lack of trust in the institutions that are working to effectively push Netanyahu out of office: the police, the prosecution and the media. Last week, a pivotal survey revealed that the Israeli public has little faith that either the police or the prosecution is currently operating with their best interests in mind.

According to Alan Dershowitz, professor emeritus at the Harvard School of Law and one of America’s most prominent criminal-defense attorneys, the Netanyahu cases are further weakening that trust.

“I think we’re seeing the weaponization of criminal justice for political purposes,” he told JNS. “In Israel, the attorney general is supposed to be outside of politics.”

Dershowitz is one of the members of a high-profile legal team that submitted a comprehensive legal brief to Mandelblit arguing that allowing favorable media coverage to be considered bribery represents a “dangerous threat” that will “cripple freedom of the press, suppress free speech and impair democratic political purposes.”

The brief’s other authors—Nathan Lewin, who has tried numerous cases before the U.S. Supreme Court; Richard Heideman; Joseph Tipograph; and Avi Bell—contend that “there has never been a single case in the democratic world in which a public figure was prosecuted, let alone convicted, of the ‘crime’ of receiving a requested ‘bribe’ of favorable publicity.” As such, the brief’s authors “compellingly require the dismissal of all charges asserting ‘bribery’ in any form.” 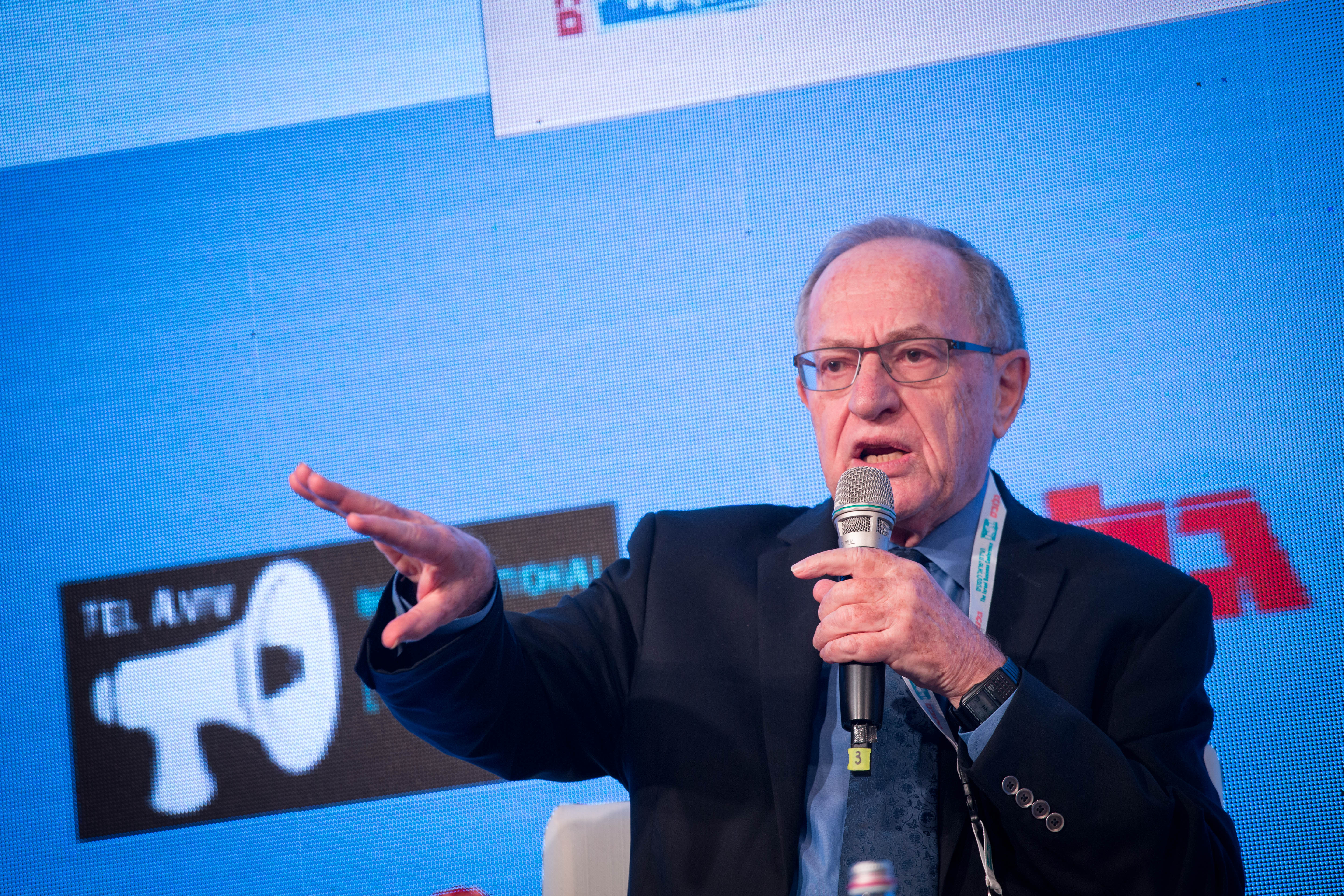 Professor Alan Dershowitz speaks at a conference in Tel Aviv on Dec. 11, 2016. Photo by Miriam Alster/Flash90.

In Case 4000—considered the most serious of the three—Netanyahu is accused of expediting a regulatory change enabling the merger of Israel’s two largest telecommunications companies, Bezeq and YES, in exchange for positive coverage in Walla owned by Shaul Elovitch.

Elovitch was the controlling shareholder of Bezeq at the time and also had a majority stake in YES. However, the merger had already been approved by Israel’s antitrust commission. The charge sheet indicates that aside from receiving positive media coverage as part of his relationship with Elovitch, Netanyahu’s actions fell well within the bounds of his role as communications minister.

Case 2000 is even more tenuous, as charges clearly state that Netanyahu never actually performed the favors allegedly discussed between him and the owner of Yediot Achronot, and that there was never any improvement in news coverage for the premier. In other words, the prosecution readily acknowledges that the exchange for which Netanyahu is being charged with breach of trust never even took place.

“If somebody were to introduce legislation saying that it is a crime for a politician to seek good coverage and it came for a vote, it wouldn’t get a single vote in the Knesset,” Dershowitz told JNS. “And that’s the best proof that it shouldn’t be prosecuted as a crime under today’s law.”

“If you couldn’t get the Knesset to pass as law criminalizing this, you shouldn’t be punishing it,” he added.

Yet despite the questionable grounds on which at least two of the cases have been assembled, they have had a profound impact on Israel’s already complex parliamentary system. Politicians who have for years been hoping to topple Netanyahu are now outright refusing to sit in a government with him while he remains under investigation.

Much of Israel’s media, too, has been backing the prosecution’s claims and attempting to tarnish the public’s perception of Netanyahu’s conduct. Many of the details of the investigation and evidence collected have been illegally leaked to the press. This, too, according to Dershowitz, was dangerous.

“I think that ‘guilt by leak’ is an extremely dangerous phenomenon in Israel, as it is in the United States,” said Dershowitz, adding that the institutions from which evidence is illegally being leaked are the same ones whose task it is to police such leaks.

“Who is guarding the guardians? Who is investigating the leaks, run by police and prosecutors?” said Dershowitz. “I think that’s a very serious problem in Israel.”

Despite the longstanding hatred for Netanyahu in much of Israel’s media, the media’s support for the prosecution is incongruous. In both Cases 2000 and 4000, it’s the owners of media outlets who are being accused of bribing Netanyahu. Moreover, if either Netanyahu or the media moguls are convicted, it could fundamentally change the way the Israeli press operates. Following a conviction, all political coverage could become the basis of retroactive prosecution if it could be proven that a journalist or media owner had received benefits in exchange.

“I think they’re allowing a short of short-term political benefit to cloud their judgment about the long-term implications for freedom of the press,” said Dershowitz.

Members of the prosecution, too, are pushing Mandelblit to hand down formal indictments, which could come as early as this week.

According to Dershowitz, “Many people—I’m not suggesting this is true of Mandelblit, it’s not—but I think there are many people that just want to get Netanyahu, with whatever it takes, and here that means compromising important legal principles. Maintaining Israel’s rule of law is more important than any political results or political outcomes.”

According to Dershowitz, the attorney general can begin to restore trust in Israel’s legal system by dropping the charges, despite the impact that the investigations have already had on Israel’s political situation.

“Well, he [Mandelblit] hasn’t made a mistake yet. In this case, I think it would be a mistake to go forward with claims that relate to dealings between the media and politicians,” said Dershowitz.

“I’ve known Mandelblit as a fellow lawyer, and I have enormous admiration for him,” he said. “I’m asking Mandelblit to do the right thing. And I think doing the right thing would be not to charge for Case 2000 and 4000.”