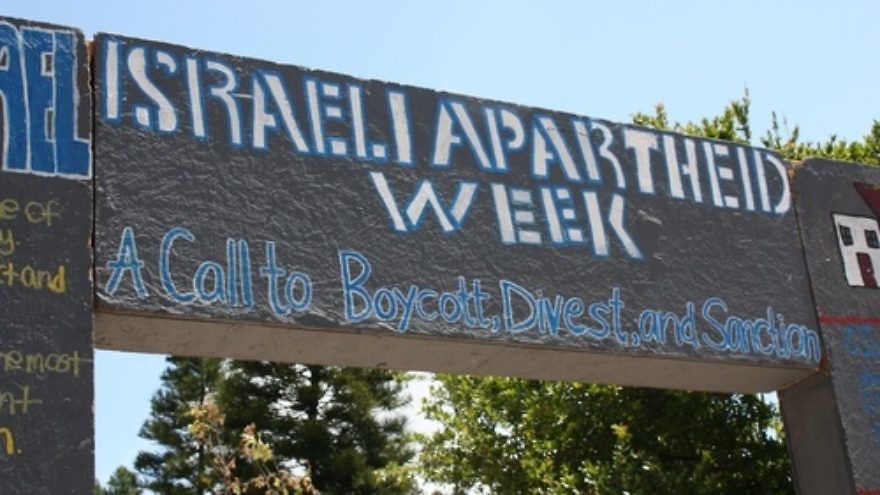 Prime Minister Benjamin Netanyahu said earlier this month that the Boycott, Divestment and Sanctions (BDS) movement against Israel will fail because various countries “are flocking to Israel” wanting Israeli technology. According to leading pro-Israel professors and academic leaders, on a practical level Netanyahu is correct. But that doesn’t mean BDS isn’t causing any apprehension.

Ilan Troen, director of the Schusterman Center for Israel Studies at Brandeis University, tells JNS.org that professors are now asking themselves, “Will the fact that I am Jewish—that I visited Israel—impinge upon the way I am perceived?”

On the one hand, “We don’t see anything on the ground that one can say, ‘This is a result of the boycott,’” explains Prof. Rivka Carmi, president of Ben-Gurion University of the Negev (BGU). Yet Carmi says that while there is no “open boycott,” there is “something underlying, something silent. … It is creeping on you, it is insidious.”

The actual effect of such efforts is minimal, said Brandeis’s Troen. Yes, there may be a doctoral student who is not admitted to a post-doctorate position when he was sure he would get in. There might be a keynote address that a fitting Israeli academic will not be invited to deliver. It may be more difficult to get a journal article published. But as long as “the loss of scientific contribution from Israel would be too harmful for the ultimate driving force of science and medicine,” collaboration with Israeli scholars will continue, said Abraham Zagen, an associate professor at BGU.

Yet Dr. Samuel Edelman, director of the Academic Network of the Israel on Campus Coalition (ICC), said that in his role, he has heard many junior faculty members voice apprehension about being vocal in support of Israel on their campuses, out of fear that it could have an impact on their tenure or promotion.

“This is all anecdotal,” Edelman tells JNS.org. “There are no statistics on whether or not there has been any conscious attempt to punish faculty for being pro-Israel. But this is a fear many faculty have voiced to me and that number keeps increasing.”

Troen has seen a similar escalation in apprehension.

“It makes people nervous,” he says of BDS and its possible ramifications.

In the case of University of California, Santa Cruz Professor Tammi Rossman-Benjamin, “nervous” is an understatement, she says. Benjamin describes that ever since she came out against the “implicit and explicit [anti-Israel] bullying that goes on,” she became “a pariah in my university and other campuses in California.”

Students for Justice in Palestine put up flyers across the campus with Benjamin’s picture, terming her an Islamophobe. She was threatened with lawsuits and defamed in the student press for fighting anti-Semitism, objecting to the use of the classroom to promote BDS, and combatting a campus climate that she feels is wrought with bullying tactics and harassment of Jewish students and faculty members.

“On some campuses, it is impossible. Unless you don’t care about your job, you’ll shut up or even go along [with the anti-Israel movement],” Benjamin tells JNS.org.

Josef Olmert, who teaches at the University of South Carolina, says he had a Jewish colleague inform him he shied away from teaching about Israel for fear that he would be accused of bias. Olmert, himself an international studies professor, was told he could not teach about the Middle East when he worked at American University.

“I do not like to be spat at in the face and [be forced to] pretend it was a blessed rain,” says Olmert, who is originally from Israel.

In response to growing tension, the ICC has created a national network of senior faculty, staff, and administrators who are supportive of Israel on college campuses to serve as mentors for junior faculty and students, and to help advocate for them. Edelman says junior faculty can rely on these mentors to guide and support them in the tenure process.

Students, meanwhile, are increasingly grappling with BDS. Benjamin, who has been tracking the impact of BDS on students for nearly a decade, says she has seen in recent years an increasing number of professors using the mantle of academic freedom to justify advocating BDS both on campus and directly to students in their classrooms.

“I have students who have told me they think they were graded down because they expressed a sentiment about Israel different from the professors,” Benjamin says. “This is very difficult for the students. You don’t want to get a bad grade or ruin a relationship with a professor that you might need to write you a recommendation.”

Anti-Israel bias is also not limited to traditional humanities courses, as some might think. Troen says he has seen examples of top chemistry professors or experts in Russian literature sounding off about how terrible Israel is. This has an impact on young people, he says.

Student organizations are almost powerless against anti-Semitism and anti-Israel messaging in the classroom, according to Benjamin, because student groups don’t share the same legitimacy as the staff.

“These faculty members are brazenly using their academic credentials to advance their purely activist agenda. … Once that’s happened, it’s legitimated,” she says.

In the short term, “there is a growing sense of feeling uncomfortable” for the pro-Israel community on campuses, Olmert says. “Already college students are not as favorable toward Israel as the general population of the U.S.,” says Edelman.

In the long term?

“Down the road, [current college students] are going to be our future leaders. Faculty has a huge impact on that,” Edelman says, adding that more Jewish community funding should be put into faculty education, including visits to Israel.

“This needs to be addressed,” he says. “And if it is not addressed quickly, then we will have more and worse challenges down the line. We only have a short window to do this.”

Maayan Jaffe is a freelance writer in Overland Park, Kan. She can be reached at maayanjaffe@icloud.com.