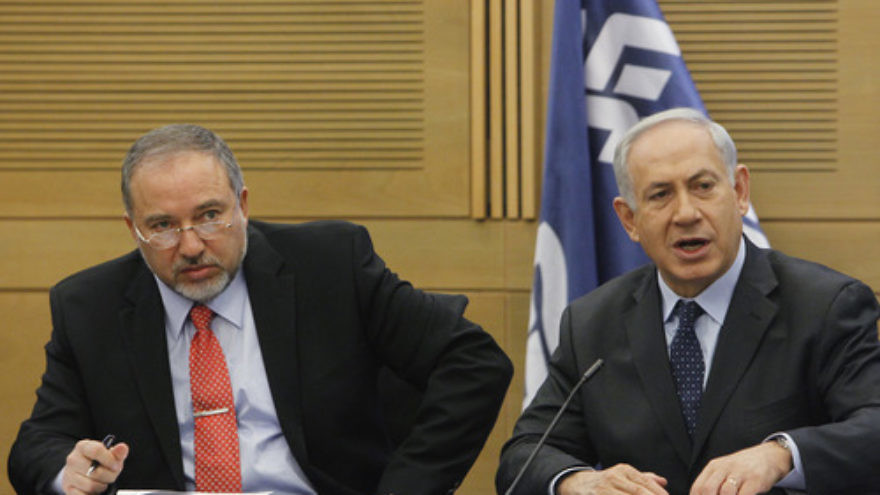 Israeli Prime Minister Benjamin Netanyahu (right) and then Foreign Minister Avigdor Lieberman at a meeting of the Likud-Beiteinu faction in the Knesset on March 11, 2014.
Republish this article
1182 WORDS
Spread the word.
Help JNS grow!
Share now:

Israeli Foreign Minister Avigdor Lieberman, head of the Yisrael Beiteinu political party, announced Monday that his party is splitting from Prime Minister Benjamin Netanyahu’s Likud, dissolving a partnership formed ahead of the Jewish state’s 2013 general election. Lieberman is reportedly seeking to distance himself from Netanyahu’s policies on Gaza and Hamas.

Netanyahu and Lieberman held a long private meeting on Monday morning, Army Radio reported. Lieberman proceeded to attend a Yisrael Beiteinu faction meeting, after which he called a press conference in Jerusalem and announced the split, spelling the end of the Likud-Beiteinu Knesset faction.

“It’s no secret that the differences of opinion between the prime minister and me have become pivotal and fundamental,” Lieberman told reporters. “The situation no longer enables us to maintain the joint faction called Likud-Beiteinu. Therefore, we plan to petition the Knesset’s House Committee in the next few days and ask it to allow us to become a separate faction.”

Lieberman said the political partnership between the two parties “didn’t really work during the election [campaign], it didn’t work after the elections, and it doesn’t work today.”

“There were more than a few technical problems, and when those [problems] become fundamental issues, there is no point in hiding them,” he said.

The foreign minister said his party would remain “a loyal part” of Israel’s governing coalition.

“I see no reason to dismantle the coalition,” said Lieberman. “If anything, splitting [the factions] will only make the coalition stronger. … This was a colorful coalition to begin with, sporting some of the widest ideological gaps in history.”

The Prime Minister’s Office made no official comment on Lieberman’s announcement.

Elaborating on his differences with Likud, Lieberman said he believed the Israel Defense Forces’ Operation Pillar of Defense in November 2012, which came in response to an unprecedented rocket barrage from Gaza terrorists, ended “prematurely.”

“[Israel’s operation] ended because it was two months before the general elections and we were not about to let Hamas dictate when Israel holds election, so ending the [operation] when we did was the right thing to do at that point. … Still, I can recall, and I can remind you of, all the times I said we have to do something about Gaza… Operation Pillar of Defense had significant achievements, from the assassination of Hamas chief of staff Ahmed Jabari to destroying 95 percent of Hamas’s long-range missiles,” he said.

“Since then, they have been able to manufacture hundreds of quality missiles with a range of 80 kilometers (50 miles) that can reach the outskirts of Netanya,” added Lieberman. “This reality, living with a terror group training hundreds of missiles at us—that’s intolerable. This has to stop because 1.5 million people can’t live under constant threat.”

Lieberman also commented on the recent tensions between the Arab and Jewish sectors in Israel, saying, “What’s happening is very disconcerting. There is a consensus among the Israeli leadership, the right, the left, the center—we all agree that the law must be upheld and any violence or incitement must be denounced.”

The split will see Yisrael Beiteinu become the fifth-largest party in the Knesset, with 11 MKs (the same number as Shas), while Likud will be left with 20 MKs. Likud MK Tzipi Hotovely said Lieberman “has turned the Israeli government into a battleground”

“If the foreign minister disagrees with the cabinet’s decision, he should be so kind as to resign,” she said. “Lieberman’s hypocrisy has been evident throughout his political career—he sways with the public’s mood. His conduct is an embarrassment to his position as a member of cabinet.”

According to Army Radio, Lieberman is seeking to assume a harder line than Netanyahu on Gaza and Hamas ahead of the next Israeli general election. His decision to split with Likud was apparently made after he traded barbs with the prime minister during Sunday’s cabinet meeting over the way the Jewish state has been dealing with the security situation in southern Israel.

Ministers privy to the Sunday exchange said the discord stemmed from the fact that both Netanyahu and Defense Minister Moshe Ya’alon support the Israeli military’s “quiet equals quiet” premise, by which Israel will not strike Gaza if its terror groups refrain from firing rockets, while Lieberman and Habayit Hayehudi Chairman MK Naftali Bennett demanded that the government order a large military operation in Gaza.

Bennett also urged the cabinet to announce the construction of new housing units in Gush Etzion, but the cabinet voted to postpone the move.

The difference of opinion between the ministers turned into a confrontation during Sunday’s meeting. Netanyahu, Ya’alon, and Public Security Minister Yitzhak Aharonovitch were briefing the cabinet about the recent security developments, including the weekend’s riots in Jerusalem and northern Israel. Environmental Protection Minister Amir Peretz (Hatnuah) asked Netanyahu to instruct ministers to “act like cabinet ministers and not like commenters” while visiting homes in the southern Israeli city of Sderot that were hit by rockets.

Peretz is a resident of Sderot, which has endured rocket attacks for years. The prime minister responded to the comment—clearly directed at Lieberman—by saying, “You have a point. You shouldn’t use these events as an excuse for any harsh statement, and some have been voicing them not just against the government, but against me as well. There is a time and a place for expressing such opinions. Uniformity is important when it comes to the things being said and the actions taken when dealing with Hamas.”

Lieberman apparently understood the hint, retorting, “You’re one to talk. The one to take advantage of the situation, to call a press conference before the funerals [of murdered Israeli teens Gilad Shaar, Eyal Yifrach, and Naftali Frenkel] and give statements to the press was you, Mr. Prime Minister. You stood there and used slogans you can’t back up. At least my statements follow a set [political] line. You said you would act harshly against Hamas, you ran for election on that slogan—so act on it.”

Netanyahu stressed that some decisions were best left to the Diplomatic-Security Cabinet’s discretion, telling Lieberman, “Maybe if you attended cabinet meetings you’d understand.”

The foreign minister said he was absent from recent cabinet meetings because he was on a series of state visits, which he cut short given the recent events. Netanyahu proceeded to remind Lieberman that he was absent from last week’s cabinet meeting despite being in Israel, to which Lieberman responded, “Don’t patronize me,” adding that he had a meeting with Albania’s parliamentary speaker and that one “can’t cancel a meeting with foreign dignitaries on two hours’ notice.”