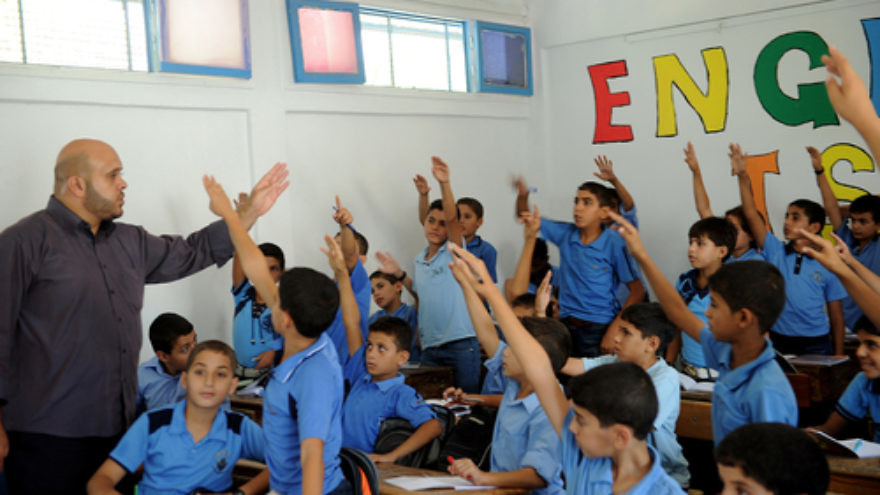 Palestinian boys raise their hands at a school in Gaza supported by the United Nations Relief and Works Agency for Palestine Refugees in the Near East (UNRWA) in September 2011. Credit: U.N. Photo/Shareef Sarhan.
Republish this article
737 WORDS
Spread the word.
Help JNS grow!
Share now:

While the breakdown of the Israeli-Palestinian peace process grabs the latest headlines, a growing group of organizations is calling attention to what it believes to be a major obstacle in fostering understanding between Israelis and Palestinians: the United Nations Relief and Works Agency for Palestine Refugees in the Near East (UNRWA).

David Bedein, bureau chief of the Israel Resource News Agency and director of the Nahum Bedein Center for Near East Policy Research, says the U.N. group, which is responsible for administering schools in Palestinian refugee camps, indoctrinates students against the Jewish state through the use of incendiary textbooks and works closely with people affiliated with known terrorist organizations in the region. According to figures provided by UNRWA, the United States government is its biggest funder, contributing slightly more than $233 million in 2012. The agency’s two-year budget for 2012 and 2013 amounted to $1.3 billion.

Bedein, who has worked on the issue for 25 years, and his center have launched an international tour that includes screenings of the organization’s “Camp Jihad” documentary. Released in July 2013, the film highlights Bedein’s findings on the indoctrination of Palestinian children. Its claims are backed by studies completed by Jonathan D. Halevi, a senior researcher at the Jerusalem Center for Public Affairs, and Arnon Groiss, director of research at the Institute for Monitoring Peace and Cultural Tolerance.

Groiss’s study translated 150 new Palestinian Authority (PA) textbooks. The study claimed to find widespread delegitimization and demonization of Israel in the books, as well as a call for violent struggle rather than peace. According to the study, the PA textbooks say that Jews have no rights to Israel, including to Jewish holy sites, and are not considered legitimate residents of the country. The name “Israel” appears less than a handful of times on maps in the textbooks and is usually replaced with “Palestine,” and areas inside pre-1967 Israel are described exclusively as Palestinian, the study said.

Last month, Bedein’s film tour came to Washington, D.C., with two events at the National Press Club and the offices of the Baker Hostetler law firm.

According to attendees at the Press Club event, UNRWA’s Washington liaison officer, Chris McGrath, and others from the UNRWA office were present. McGrath reportedly argued that the scenes from “Camp Jihad” were fabricated, and he attempted to refute the examples Groiss referred to in textbooks used by the PA.

“UNRWA uses the textbooks that are used in host-country schools, including the PA textbooks in Gaza and the West Bank that were created with the full support of the United States and the European Union,” McGrath told JNS.org. “In addition, UNRWA enhances its curriculum with additional teaching regarding human rights, tolerance and non-violent conflict resolution.”

According to Bedein, his organization also gave presentations to staff of the Senate Foreign Affairs committee and various aides at the House of Representatives.

“One of the questions they did ask was, ‘How do we get an objective analysis of the books?’” said Bedein. “I gave the example that the former Vatican ambassador, Archbishop Pietro Sambi, conducted an investigation of the schoolbooks and his conclusion was rather shocking. He said, ‘These were war manuals.’”

Bedein said he believes children at UNRWA schools are being told that the only end to the Israeli-Palestinian conflict would be for them to resettle to the areas that are now part of Israel, which sets an unrealistic expectation. He said that his organization’s primary goal is to raise awareness of the issue among politicians, journalists, and diplomats worldwide, in order to get them to reassess their support of UNRWA.

“The important thing is that there is going to be an expiration of the UNRWA mandate at the end of June and we’re hoping to tack on some very important conditions for the renewal of UNRWA [funding],” he said. “Why should a United Nations agency, which is supposed to be promoting peace, have a curriculum which is basically a war curriculum?”

“UNRWA has conducted a lengthy and detailed investigation into the film and we categorically reject the allegations it contains,” said Gunness. “The film is grossly misleading and we regret the damage it has caused to UNRWA and the United Nations.”