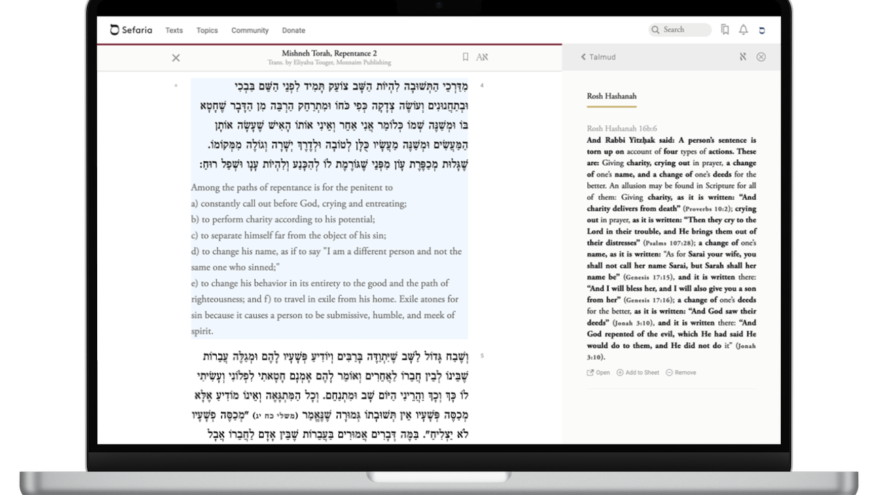 (September 21, 2022 / JNS) A complete English translation of the Mishneh Torah interconnected with other Jewish texts is being digitally offered for the first time ever by the nonprofit organization Sefaria, which digitizes and shares Jewish texts for free in Hebrew along with translations and commentaries.

“We are so excited for learners to dive into this rich text and share their reflections with each other and the world,” said Sara Wolkenfeld, Sefaria’s chief learning officer. “For the Jewish people, our texts are our collective inheritance. They belong to everyone and we want them to be available to everyone, in the public domain or with creative commons licenses.”

The Mishneh Torah, authored by the medieval Torah scholar Maimonides, commonly known as the Rambam, between 1170 and 1180, while he lived in Egypt, consists of 14 books and is a major code of Jewish religious law. Users can access it on Sefaria’s website and through the Sefaria app.

The translation provided by Sefaria was completed between 1986 and 2007 by Rabbi Eliyahu Touger. The text on the Sefaria website comes with Hebrew commentaries; interlinking to other religious texts, to help readers understand the work; and topic tagging so they can research related ideas that interest them.

The Sefaria website also allows users to create shareable source sheets that incorporate religious texts from Sefaria’s catalogue with their own commentary.

Sefaria is used by more than 500,000 people each month, including students, educators and scholars.