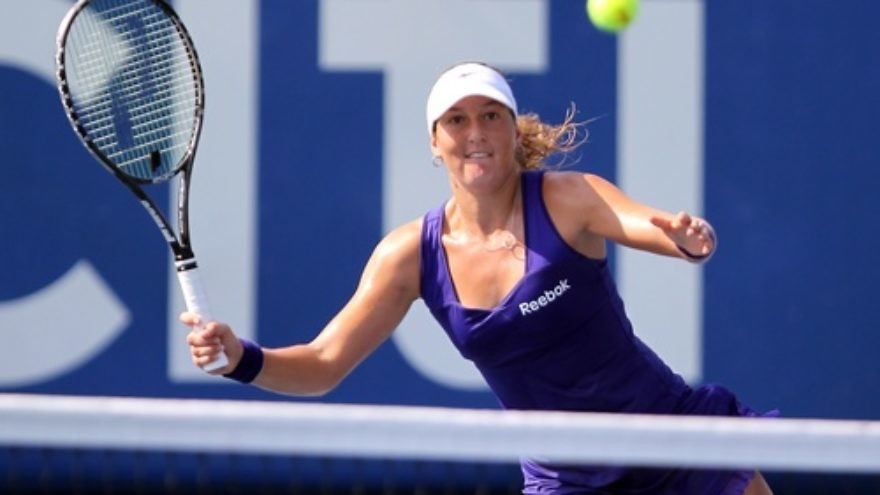 Israeli tennis player Shahar Pe’er competes at the Citi Open in July 2011. Pe’er is one of 14 women being recognized by the Israeli government as part of the country's Independence Day celebrations this May. Credit: Keith Allison via Wikimedia Commons.
Republish this article
674 WORDS
Spread the word.
Help JNS grow!
Share now:

(April 2, 2014 / JNS) How is the Jewish state’s 66th birthday celebration different from all other years’ celebrations? Special plans are afoot to recognize the achievements of Israeli women.

On May 5, the theme of the ceremony kicking off the back-to-back Israeli Memorial Day and Independence Day events on Mount Herzl is “The Era of Women—Achievements and Challenges.” Independence Day torches, featured annually at the official state ceremony, will be lit exclusively by women at this year’s event.

Israeli Culture and Sport Minister Limor Livnat introduced the government’s yearlong focus on the achievements and challenges of today’s Israeli woman, in recognition of those women who have made significant contributions to both the State and to Israeli society as a whole in the arenas of science, culture, economy, defense, women’s rights, education, business, hi-tech, the environment, and social activism.

“The time has come that the state and society will put women at the center and give them the national stage,” Livnat said in a statement.

Though all Israeli women are included in the government’s Independence Day salute, 14 notable women have been singled out for special recognition as ceremonial torchbearers:

The 14 torchbearers were selected by the members of a special committee charged to select women of great accomplishment from across Israel’s diverse population, what Livnat referred to as representing “a unique mosaic of Israeli society.” And that they did. But other Israeli women interviewed by JNS.org have their own ideas of who should have made the list. Among them:

Yet Gabie Sykora of Ra’anana believes that every wife and mother of every soldier should be nominated. She currently has a son and a daughter in the Israel Defense Forces.

“Behind nearly every holy chayal/chayelet (male and female soldier),” she told JNS.org, “there’s a mom or wife doing their horrendously smelling laundry, getting food ready to stuff them with or send back with them, and trying her darndest not to worry and to keep smiling.”