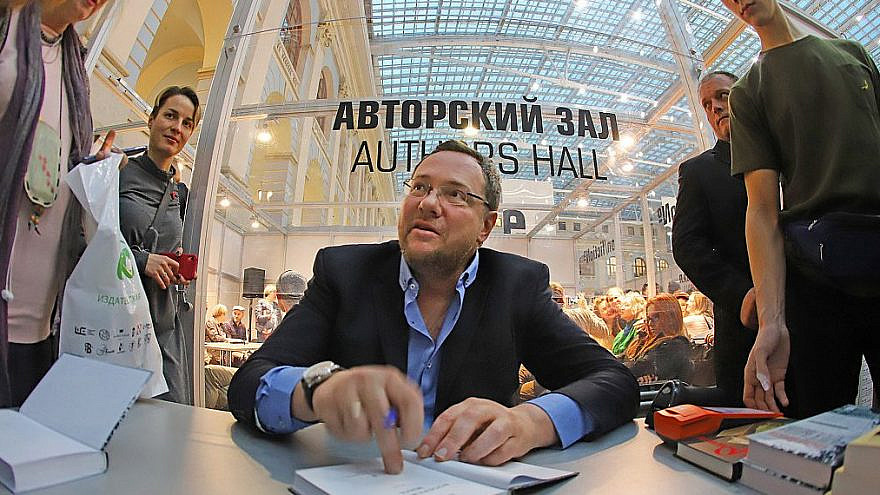 (January 28, 2021 / Israel Hayom) In the last month of 2020, Russia announced the winners of the Big Book National Literary Prize for the best prose writers in the Russian language. The prize, founded 15 years ago, has been awarded to renowned writers like Lyudmila Ulitskaya, Victor Pelevin and Vladimir Sorokin. This year, first place—which comes with 3 million rubles (about $40,000)—went to a Russian-born Israeli, Alexander Ilichevsky of Jerusalem, for his novel Newton’s Drawing.

Ilichevsky might not be known to Hebrew readers, but in Russia, he’s a literary star, and over the past decade his books have consistently become bestsellers. He previously won second place in the Big Book Prize for his novel The Persian.

Ilichevsky was born in Soviet Azerbaijan in 1970. He studied physics at Moscow Physics and Technology Institute, and in the 1990s continued his studies in California and Israel. He moved to Israel in 2013, and when not busy writing, works as a medical physicist in the radiotherapy departments of Hadassah Ein Kerem Medical Center.

“I have to lead an extremely disciplined life in order to devote every free minute to writing,” said Ilichevsky.

“It’s not easy at all, but I’ve gotten used to it. I’ve been writing since I was 20, and since then I’ve more or less become skilled at splitting my time and my energies. One way is to go to bed early and get up early in order to write a few pages before the workday begins,” he said.

Ilichevsky has published more than 20 books in various genres—novels, short stories and poetry. He is esteemed in Russian society as an intellectual, and his renown goes beyond the Big Book Prize. He won the Russian Booker Prize for his novel Matisse, and his work has been translated into multiple languages.

In Israel, however, he is almost completely unknown.

“I’m not completely involved in the literary scene in Israel. I don’t have time for public relations, I avoid social interactions. The number of people I know from the Israeli literary world can be counted on one hand,” he said, adding that his scientific career keeps him quite busy.

“The hospital world is exciting, and I’m proud of having the privilege of being part of it, the privilege to advance science and help succor and heal,” he said.

While Ilichevsky says he hasn’t seen any interest from Israeli publishers in translating his books into Hebrew, his readers in Russia have gotten used to thinking of him as an Israeli writer. His last two novels both take place in the Jewish state, and a short story collection scheduled to be published this year is also based on his experiences here.

“I can’t say that my writing is aimed at non-Israeli readers,” he said. “I’ve been living in Israel for eight years, and that’s long enough for literary work, to need to draw on the reality around me,” he said.

The real question, he added, “remains why Russian readers want to read about what happens in Israel.”

Ilichevsky has no illusions about the possibility of writing in Hebrew.

“At age 50, I view my abilities in a sober light, and what’s more, in a polyphonic society like Israel, translation shouldn’t be a problem. It’s a shame that for now, Israeli culture isn’t interested enough in us to read us,” he said.

Israel’s polyphonic society also appears in “Newton’s Drawing.” The book’s protagonist is a physicist searching for the answer to a scientific problem (dark matter) while also searching for his lost father. The search yields metaphysical principles that lead the protagonist on three journeys to the far corners of the world: to a mysterious cult in the Nevada desert, to an abandoned Soviet laboratory on snow-covered mountaintops in central Asia, and to Ilichevsky’s beloved Jerusalem.

His next novel, also due out this year, also takes place in Jerusalem.

“I decided to call it ‘Iceland,’ but it doesn’t refer to the land of the geysers, but to a quiet Jerusalem street of that name, near Hadassah Medical Center. The protagonist is a man who doesn’t have an overabundance of money, but he needs a view to lift his spirits. I put him on Iceland Street, which offers an amazing view of Ein Karem.”

Ilichevsky’s entire body of work is full of motifs from Jewish history and philosophy. He says that he has consciously addressed his Jewishness since he was 27 when he began reading the Bible, attending synagogue and studying Jewish texts.

“Since then, my Jewish education came together, and my Zionist outlook became much deeper, certainly in recent years after I made aliyah,” he said. “In general, Jewish philosophy no doubt provides fertile ground for my world of references, for my literary worldview.”

Q: Your work is deeply rooted in the Israeli experience, but at the same time is inaccessible to Israeli audiences.

A: It turns out that’s the case. I think that Israeli culture can’t allow itself to ignore the creation happening in Russian and other languages. The existing ignorance [of them] reflects Israeli society’s narcissism, which is more or less indifferent to most of what diverges from its own horizon, especially if that happens in a language other than English.

Q: Could it also be that not belonging to political cliques works against you?

A: The current-events agenda of Israeli politics doesn’t entice me, actually, and I’m far from having any tendency toward polarization, which characterizes both Israeli culture and the world of politics. This is my contribution to reasonable thinking. There needs to be someone in this country who stays above the disputes and calls for solidarity and reconciliation between Jews.