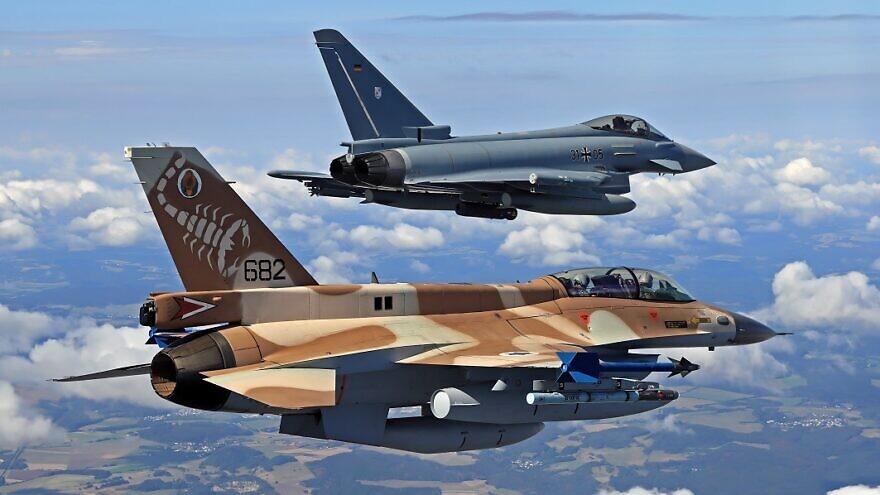 (September 23, 2020 / JNS) A recent historic flyover by Israeli and German fighter jets over the Dachau concentration camp to mark the memory of victims of the Holocaust also shed light on the deep contemporary cooperation in place between the two countries on defense affairs.

That cooperation was symbolized by the fact that the Israeli Air Force’s F-16 and the German Air Force’s Eurofighter Typhoons that took part in the flyover, dubbed “Memory for the Future,” were both equipped with a cutting-edge targeting pod produced by Israeli defense company Rafael.

“The fact that our products are flying both in the IAF and the German Air Force is a statement to the world,” Assaf (full name withheld), business development manager at Rafael’s Electro-Optics Division, told JNS. “Here is a flagship product with excellent performance and a long track record. The German Air Force flies with it and is proud of it. There is a reason.”

The German Air Force has been a client of Rafael for more than 20 years, according to Assaf, and the Israeli defense company has integrated multiple products on German’s Eurofighter and Tornado fighter jets—its two main combat aircraft.

One of those products is the Litening targeting pod, of which more than 1,800 have been sold to 25 air forces around the world, including the German Air Force. Assaf noted that cooperation with U.S. defense company Northrop Grumman enabled many of the Litening pods installed on American aircraft.

“It is a major company product. Each time, we produce a new generation of the pod,” he said. “Currently, we are in the fifth generation of this product, which we have been producing for almost 20 years.”

The Litening pod, which is in service in the Israeli Air Force, delivers advanced high-definition visual intelligence for pilots, primarily on targets on the ground (although some aerial targets as well). It uses day and night-vision sensors to detect and track targets that are near and far, and the fifth generation comes with improved capabilities that provide “incomparably improved abilities for the fighter jet pilot,” stated Assaf. “As Litening generations improve, the workload on the pilot decreases, freeing pilots up and making accessible to them—in much better ways—data that they need to conduct their mission.”

The pod is essentially like the pilot’s binoculars, he added, and the newest version provides more precise, clearer and detailed data, “all of the things that improve mission implementation from end to end.”

Assaf noted that Israeli-German air force cooperation is good, and that the commanders of both air forces are “real friends.”

He added that the joint training is an expression of this cooperation, and that Rafael’s products form “an inseparable part of the aircraft, and therefore, are part of the training.”

‘A message of strength’

During the flyover in German skies, the IAF Commander, Maj. Gen. Amikam Norkin, led the Israeli formation, which was accompanied by a German formation led by the German Air Force Commander, Lt. Gen. Ingo Gerhartz.

“The Eurofighters and F-16s flew side by side, each equipped with the best armaments and capabilities. We were moved to see the Litening pods on both types of aircraft as part of this cooperation,” said Assaf.

“As a son of a mother who is a Holocaust survivor, it was deeply moving to see IAF, which I served in for 26 years, fly jets in German skies. It was a message of strength, part of the statement of ‘never again,’ ” he added. “As an employee of Rafael who works on marketing this pod and now runs the Germany program, it is a big source of pride.”

Rafael has sold Litening pods to the air forces of Britain, Italy and Spain—central NATO members and beyond Europe, all over the world.

Gantz said “the joint exercise contributes to the military edge of the [Israeli] air force at every range of operation—something we will not compromise on.”

He also asked his German counterpart to work with partners in the German government to extend the weapons embargo on Iran that’s due to expire next month—an embargo he described as a “first-class instrument against the Ayatollah regime that seeks nuclear weapons, and which spreads terrorism and violence that undermine international and regional stability.”