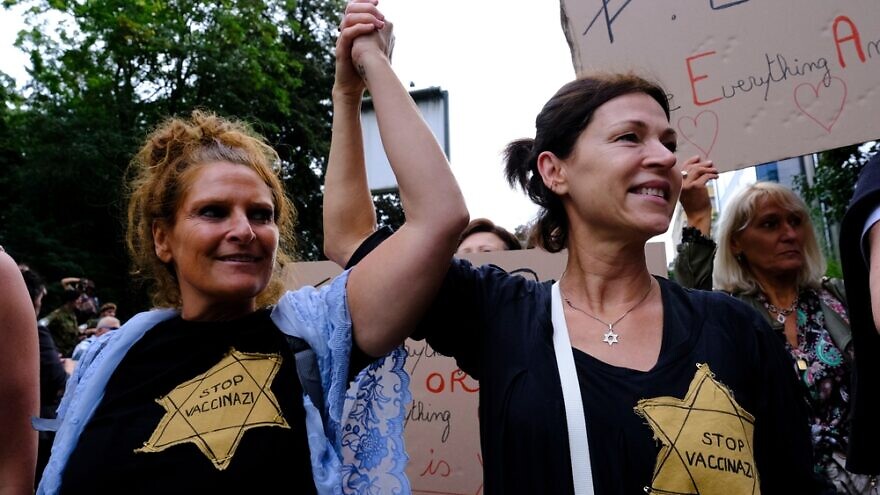 (January 24, 2022 / JNS) Holocaust trivialization isn’t a new phenomenon, but it’s a “rising trend,” and it received a boost thanks to COVID-19, according to the Combat Antisemitism Movement (CAM), which released a Jan. 20 report detailing more than 60 million online engagements linking the pandemic to Germany’s genocide of the Jews.

The study analyzed word combinations in six languages across the biggest social-media platforms, as well as other sites, over a two-year period (January 2020 to December 2021). It found the vast majority of Holocaust-pandemic references (57 million) were in English. Hebrew was second (2.6 million) and Spanish third (2.1 million).

“Over the last two years, Holocaust trivialization has become increasingly mainstream among many politicians, grassroots movements, in the media and online, representing a distortion of history and a direct affront to the memory of the victims and the dignity of survivors,” according to a CAM press release.

“This is happening in mainstream political conversations, on primetime television and in protest movements around the world,” he said. “The CAM Information Hub monitored over 130 public manifestations reported in the media in the last six months alone.”

A mass rally against vaccine mandates, which drew thousands of people to the National Mall in Washington, D.C., on Sunday, provides a recent example. Robert F. Kennedy Jr., one of the speakers, said the mandate was worse than Nazi Germany because “even in Hitler’s Germany, you could cross the Alps into Switzerland. You could hide in the attic like Anne Frank did.”

Maserjian stressed that CAM is a nonpartisan coalition and doesn’t take sides in any political debate. “We fight anti-Semitism across the ideological spectrum. It’s not just on the right or on the left,” he said.

He said social media has exacerbated the problem, allowing people to spread such messages with the “speed of a click” and at a “viral pace.”

‘The delivery system is unprecedented’

Rabbi Abraham Cooper, associate dean and director of global social action at the Simon Wiesenthal Center, agreed that social media is definitely a more contemporary driver of Holocaust trivialization, telling JNS: “This is an issue that fought its way to the top tier of our concerns. It’s used by extremists to spread their hate and even to do operational things.”

In December, the Simon Wiesenthal Center released its Global Anti-Semitism 2021 “Top 10” list. ‘COVID’s latest deviant strains’ made the No. 4 spot, referring to the kind of Holocaust misappropriation detailed in CAM’s study. (At No. 6 were “Social Media Giants” for their failure to rein in anti-Semitic content. The center’s “Top 10” noted that Facebook “directly profited from ads comparing the COVID vaccine to the Nazi Holocaust.”)

Cooper said that before the pandemic, he met with the top three leaders of the New York Police Department to discuss the violent hate crimes against Jews in the city, “and these three veteran cops all pointed to ‘social media.’ It’s a tool used very cleverly by our enemies.”

“The delivery system is unprecedented. The marketing capabilities of social media have not even anywhere fully been realized, but they’re massive, and the repackaging of old conspiracies and old hatreds abound,” he said.

The pandemic has been a “bonanza” for extremists, said Cooper; they have injected their Holocaust imagery into a medical debate. He said the vast majority of people who oppose vaccines are not anti-Semites, but “it doesn’t make a difference. The racists have succeeded in attaching their goals and infiltrating their anti-Semitic, neo-Nazi, Holocaust-denigrating imagery onto a legitimate, ongoing debate, which is very emotional. It’s a massive victory for them.”

Cooper said that another reason to oppose trivialization is that it strips Holocaust analogies of any meaning. “When it’s imperative to actually draw lessons when there are some terrible things happening around the world, it no longer has the same impact because of the confusion about what those images actually mean,” he said.

Both Cooper and Maserjian agreed that the reason Holocaust analogies are appealing is that they’re a quick way to score political points. “It’s provocative. So it’s easy to draw attention to your argument,” said Maserjian.

Cooper added that such comparisons are especially tempting in the age of social media where people only have a second to grab others’ attention.

“Why are you doing this through the prism of the Nazi Holocaust?” asked the rabbi, noting that this year marks the 80th anniversary of the Wannsee conference on Jan. 20, 1942, where 15 ministers in 90 minutes sealed the fate of European Jewry. “That’s what you think governments are doing? Trying to find ways to kill you?” he said.

Maserjian said: “Our message is that the Holocaust can’t be compared. There was a singular event in human history, arguably, the worst crime against humanity in history, and putting millions of people into ovens is not comparable to what we’re seeing today.”