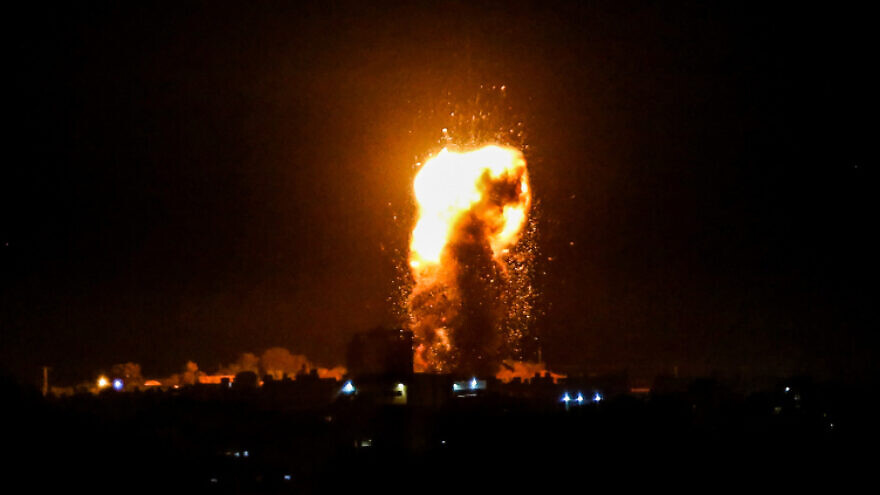 (September 16, 2020 / Israel Hayom and JNS staff) Israeli fighter jets and helicopters carried out two waves of strikes on Hamas targets in the Gaza Strip early Wednesday morning, after terrorists in the coastal enclave fired 15 rockets into Israeli territory overnight on Tuesday, according to the Israeli military.

The first two rockets were launched at approximately 8 p.m. on Tuesday, Israel time, during the afternoon ceremony at the White House for the signing of the U.S.-brokered Abraham Accords between Israel, the United Arab Emirates and Bahrain. The red-alert sirens went off in southern Israel as UAE Foreign Minister Sheikh Abdullah bin Zayed bin Sultan Al Nahyan delivered his speech before the signing ceremony.

One of the rockets landed near a shopping center in Ashdod, wounding two residents. A man in his 60s sustained moderate-to-serious upper-body wounds from shrapnel, and a man in his 20s was lightly wounded in the legs, apparently by flying glass. Another four people had to be treated for shock. The Iron Dome air-defense system intercepted the other rockets, which had been fired towards Ashdod and Ashkelon.

In response, Israel struck some 10 Hamas targets in Gaza, including a factory for the production of weapons and explosives and a military compound used for training and rocket-fire experiments by Hamas, the military said in a statement. 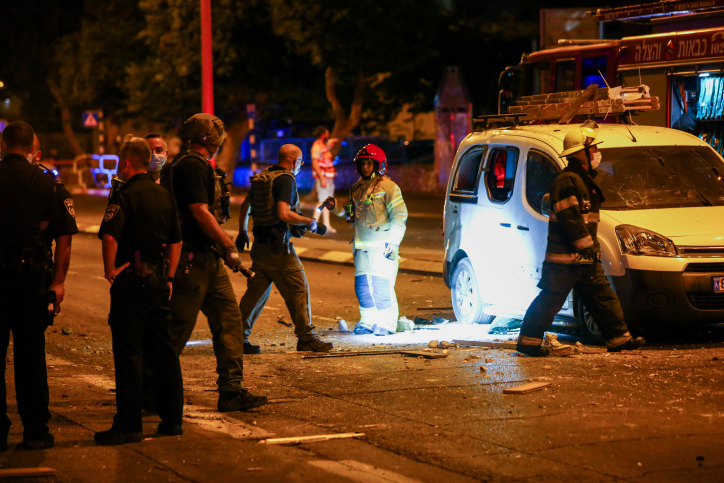 Israeli police and medical personnel at the scene where a rocket fired from the Gaza Strip hit a road in the southern Israeli city of Ashdod on Sept. 15, 2020. Photo by Flash90.

Then, in the early hours of Wednesday morning, a 13-rocket barrage was launched from Gaza at the western Negev region; eight of the projectiles were intercepted by the Iron Dome, according to the Israel Defense Forces. No casualties or damage were reported in the attack.

Following the first wave of Israeli airstrikes, the Palestinian Islamic Jihad terrorist organization issued a statement warning, “In response to the bombing of ‘resistance’ sites and based on the formula that a bombing will be answered by a bombing, the resistance has fired rockets at outposts and communities in the western Negev.”

The attacks came barely two weeks after Hamas announced that it had reached an agreement through international mediators to end the latest round of cross-border violence with Israel. Under the terms of the deal, Hamas halted launches of explosives-laden balloons and rockets into Israel, while Israel agreed to ease restrictions on Gaza.

However, Hamas and Palestinian Authority leader Mahmoud Abbas’s Fatah Party struck a deal last week for “joint resistance” against Israel in response to recent developments in the region, including the Trump administration’s “Peace to Prosperity” plan and the Israel-United Arab Emirates peace agreement.

The peace agreements with the UAE and Bahrain, known as the Abraham Accords, were signed at the White House on Tuesday by Israeli Prime Minister Benjamin Netanyahu and the two Gulf countries’ foreign ministers.

In an interview with Hezbollah-affiliated Al-Mayadeen TV on Sept. 7, Hamas deputy political chief Saleh al-Arouri threatened Israel, saying that the next conflict between the Jewish state and Gaza would be “unprecedented.”

“If there is an open confrontation, the entire Israeli home front will be involved,” he said. “We’re at the stage where we will not tolerate the pressure in Gaza, and we are ready for an open fight.”

The IDF said in a statement that “Hamas bears responsibility for what is happening in and out of the Gaza Strip, and will bear the consequences of terrorist acts against Israeli citizens.”

Speaking in Washington, D.C., just before taking off for the return trip to Israel, Netanyahu responded to the rocket attacks by saying he was “not surprised that the Palestinian terrorists fired at Israel precisely during this historic signing ceremony.”

“They want to move peace backwards; they will not succeed. We will strike at anyone bent on attacking us, and we will extend a hand in peace to anyone whose hand is extended in peace to us,” said the Israeli premier.