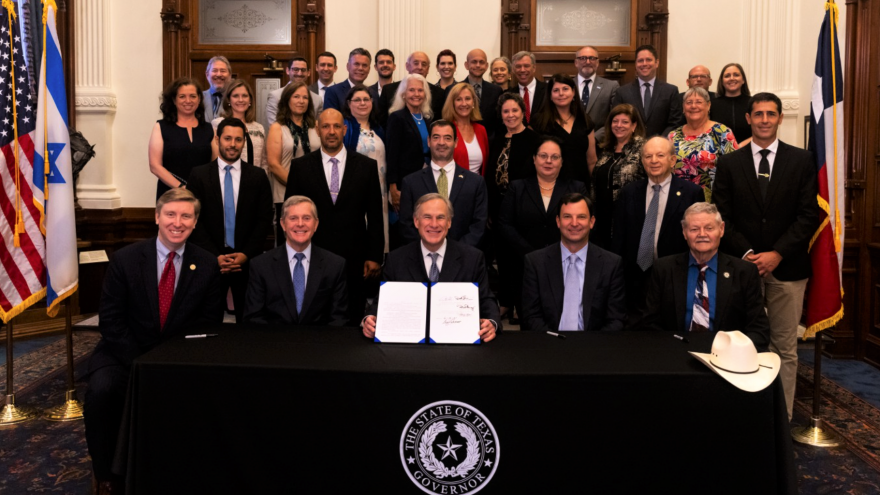 (June 16, 2021 / JNS) With the support of its governor and state legislators, Texas has become the first U.S. state to fully utilize the International Holocaust Remembrance Alliance (IHRA) working definition of anti-Semitism to interpret anti-Jewish acts.

Among the commission’s work will be producing a biennial study of anti-Semitism in the Lone Star State with the IHRA definition as a guide. That definition has been passed by numerous cities and countries in recent months and is believed to be the most comprehensive explanation of what constitutes modern-day anti-Semitism.

“Anti-Semitism has no place in Texas, and we have a duty to combat it whenever and however it arises,” said Abbott. “That is why I am proud to sign House Bill 3257 into law, which will create the Texas Holocaust, Genocide and Antisemitism Advisory Committee, and bolster our efforts to eradicate anti-Semitism in the Lone Star State.”

Joining the governor for the signing were members of the state legislature who championed the bill, including State Reps. Phil King, Craig Goldman, Tan Parker and Charles “Doc” Anderson; leaders of the state’s Jewish community; representatives from the Israel National Defense College; and Consulate General of Israel Gilad Katz. In a Twitter post, Katz praised Gov. Abbott and the Texas government, noting that this legislation was important to both Israel and the Jewish community.

Also in attendance were Randy Czarlinsky, the Houston director of the American Jewish Committee, and Dallas director Joel Schwitzer.

Czarlinsky recalled that during the AJC’s International Holocaust Remembrance Observance in January 2020 at the State Capitol with the Texas Consular Corps in attendance, Abbott “declared that the Texas Legislature would adopt the international definition on anti-Semitism during its next session. The 18-month process concluded today with the governor signing the bipartisan legislation that was passed unanimously in the Texas House and Texas Senate.”

“The use of the IHRA working definition of anti-Semitism to guide a state-mandated biennial study will help ensure Texas remains a leader in combating anti-Semitism,” said Schwitzer. “Given the sharp uptick in anti-Semitism across America, we are gratified that this legislation has received overwhelmingly bipartisan support.”

The Conference of Presidents of Major American Jewish Organizations also lauded Abbott and the Texas Legislature for the measure.

“Texas, whose Senate and House of Representatives approved the legislation with nearly unanimous bipartisan support (no legislators voted against the bills), sets an example for the rest of the country by joining the growing global coalition of countries, major cities and institutions that have rallied behind this key instrument in addressing the urgent threat of anti-Semitism,” said the letter signed by Conference chair Dianne Lob; William Daroff, CEO; and vice chair Malcolm Hoenlein. “It is essential to define anti-Semitism in order to combat it successfully.”