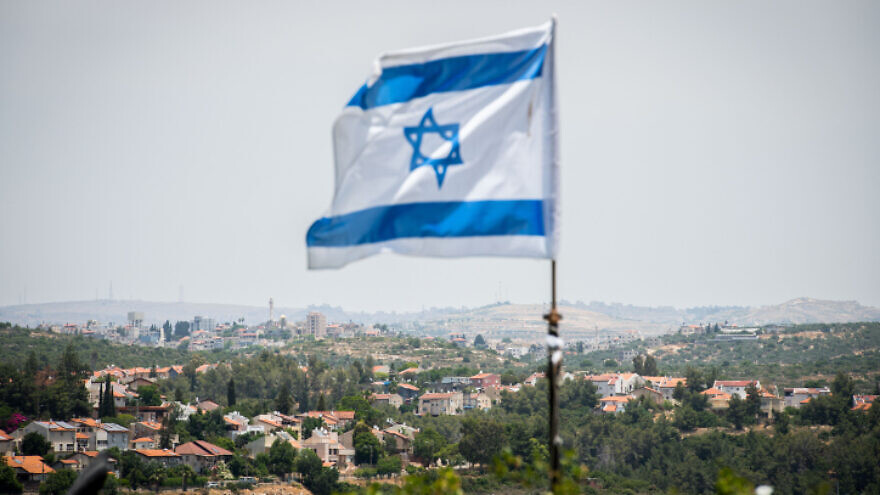 A general view of the Jewish settlement of Karnei Shomron, in Judea and Samaria, on June 4, 2020. Photo by Sraya Diamant/Flash90.
Republish this article
1002 WORDS
Spread the word.
Help JNS grow!
Share now:

(June 8, 2020 / Israel Hayom) As Israel moves closer to applying sovereignty in the Jordan Valley and parts of Judea and Samaria, Israeli Prime Minister Benjamin Netanyahu met with Defense Minister Benny Gantz and Foreign Minister Gabi Ashkenazi on Sunday evening to discuss the Trump administration’s outline for peace. The two former IDF chiefs of staff presented a united position on the matter, saying the sovereignty initiative must be implemented in such a way as to garner broad consensus within Israel, as well as international support, and must not harm diplomatic relations with Jordan and Egypt.

Prior to his discussion with Gantz and Ashkenazi, Netanyahu met with representatives of 12 Judea and Samaria localities. Also in attendance was Knesset Speaker Yariv Levin. The settler leaders arrived with a message of support for the Trump plan and the sovereignty initiative Netanyahu is spearheading. Among the settlement leaders in attendance were the mayors of Ariel and Modi’in Illit, and the heads of the regional councils of Efrat, Oranit, Alfei Menashe, Karnei Shomron, Emmanuel and others.

The mayors and regional council heads, who represent around a quarter of a million Israeli residents of Judea and Samaria, lent Netanyahu their support and voiced their confidence that he would secure a good plan for Israel and the settlement enterprise. They noted that the Trump plan includes components that just a few short years ago were considered fanciful, chief among them sovereignty.

“Representatives of the U.S. government are [attempting to] sell Plan A under the guise of Plan B. There is no greater scam than this,” said Elhayani, claiming that Washington was trying to use its support for sovereignty to force Israel to agree to the creation of a Palestinian state.

Pinhas Wallerstein, among the founding fathers of the settlement enterprise in Judea and Samaria and a former director of the Yesha Council, who was also at the meeting, said he was shaking with excitement over the prospect of Israeli sovereignty in Judea and Samaria.

Elkana Mayor Assaf Mintzer said prior to the meeting: “We believe that the offer available to us at the moment won’t be the final say on the future borders of the State of Israel and that those advising the prime minister on the matter will be able to receive a more favorable offer. We can’t allow ourselves to miss the opportunity to apply sovereignty in the coming months. We’ve been dreaming of sovereignty over the Jordan Valley, Ma’ale Adumim and Gush Etzion, and when we’re about to receive 30 percent [of Judea and Samaria] with the rest up for negotiation, we need to grab it with both hands.”

Mintzer told Israel Hayom that he and his colleagues had expressed their contempt over Elhayani’s comments against Trump and Netanyahu.

“These statements do not represent the settlers or the Yesha Council. The prime minister was assured he has significant support within the settlement enterprise. We thanked him and the director-general of the Prime Minister’s Office, Ronen Peretz, for their efforts. We understand that the timetable is very short but that it’s possible to realize the great achievement of applying sovereignty,” he said.

Netanyahu, for his part, rejected the criticism of the plan from the right. He noted that previous prime ministers had proposed withdrawing from 97 percent of Judea and Samaria, offers that were also rejected by the Palestinians, while the Trump plan calls for Israeli sovereignty in 30 percent of Judea and Samaria—an unimaginable offer just a few years ago. Earlier proposals, the prime minister continued, also stipulated the eviction of 100,000 Jewish residents, while not a single person would be uprooted from their home under the current plan.

Knesset Speaker Levin, who is a member of the joint Israeli-American mapping committee working to determine the sovereignty lines, added that the sovereignty component of the Trump plan is far greater in scope than any sovereignty legislation he pursued as a Knesset member.

“Only a year ago we dreamed about sovereignty in Ma’ale Adumim, and here we can have sovereignty over all the settlements,” he said.

Netanyahu noted that contrary to the claims of the oppositionists in the Yesha Council, the main roads in Judea and Samaria will not be transferred at any stage to the Palestinians. He emphasized that there would be no construction freeze, because constriction will be allowed within the communities.

Finally, Netanyahu said no Palestinians would receive Israeli citizenship within the framework of the plan.

“This is a historic opportunity that comes around once every 73 years,” he said.

A senior official who participated in the meeting said the internal strife in the settler movement was irresponsible and a source of consternation within the American administration. He noted that the window of opportunity for the historic initiative would only be open for a very short while and that the move to apply sovereignty could be set in motion in a matter of weeks. However, if the attacks from the right persist, he said, the window will be shut and the opportunity squandered.

Efrat Mayor Oded Raviv said upon the conclusion of the meeting with Netanyahu: “The prime minister is a friend of the settlement enterprise. In a series of endeavors, he has attained from President Trump, the friendliest U.S. president ever to Israel and the settlements, things we couldn’t have dreamed of getting.”

Revivi added, “We have enough enemies around us, there’s no need to create divisions among us. On this matter, we must all stand with the prime minister.”

MK Bezalel Smotrich (National Union) responded to the meeting, posted on Twitter: “Mr. Prime Minister. We will not allow ourselves to be duped again. A real sovereignty map? We will be there together with you with all our might. A map with an Arab state in the very heart of the beloved land? You will find in us a fortified wall.”