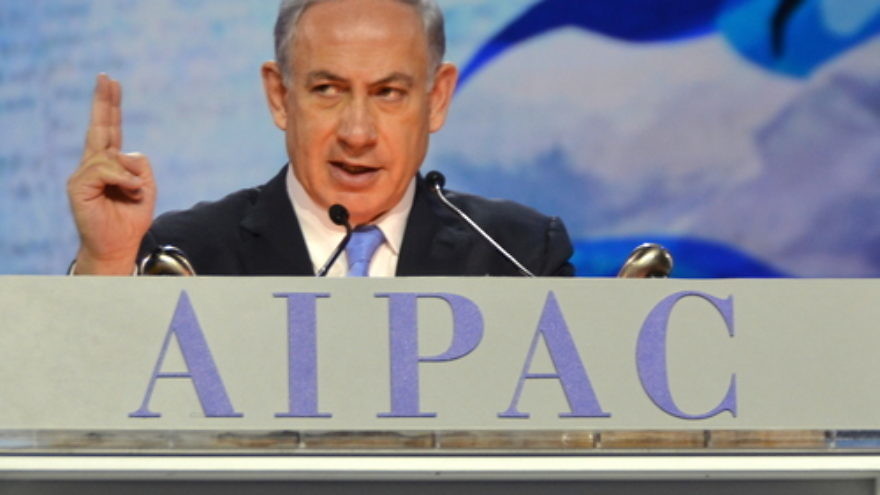 The prime minister declared to AIPAC that reports of the demise of the U.S.-Israel alliance are premature and wrong.

“Disagreements in the family are always uncomfortable, but we must always remember that we are family,” he said.

Netanyahu’s U.S. speeches come against the backdrop of American-Israeli disagreements on both protocol and policy. The White House and some Democratic legislators have opposed Netanyahu’s Congress speech on the grounds that House Speaker John Boehner (R-Ohio) did not consult President Barack Obama about inviting the prime minister. At the same time, while the proposed Nuclear Weapon Free Iran Act of 2015 would impose new sanctions on Iran if the country does not reach a political framework agreement in its nuclear talks with the P5+1 powers by March 24, Obama has vowed to veto any new sanctions legislation that passes in Congress.

U.S.-Israel tension was apparent when Vice President Joe Biden, who also serves as the president of the Senate, announced that he would skip Netanyahu’s Congress speech. Additionally, while Obama and Netanyahu would normally meet when the latter visits Washington, the White House refused a meeting with the prime minister during this visit, citing the trip’s close proximity to Israel’s March 17 election.

Netanyahu initially struck a playful tone on his Congress speech, telling the AIPAC crowd, “You see, I’ll be speaking in Congress tomorrow. … You know, never has so much been written about a speech that has never been given.” Then, the prime minister proceeded to address what he called misperceptions about his Congressional talk.

“My speech is not intended to show any disrespect to President Obama or the esteemed office that he holds. I have great respect for both,” he said.

Netanyahu praised U.S.-Israel security cooperation and intelligence sharing, as well as American support for the Jewish state at the United Nations. He told the AIPAC attendees, “I am deeply grateful for this support and so should you be.”

The speech to Congress is also not intended to inject Israel into the American partisan debate, Netanyahu said, noting that the U.S.-Israel alliance “has been championed by both parties, and so it must remain.” He said he regrets that some “have misperceived” his latest U.S. visit as partisan in nature.

The true purpose of Netanyahu’s Congress speech, said the prime minister, is “to speak up about a potential deal with Iran that could threaten the survival of Israel.” Pointing to a map on a screen behind him, Netanyahu described how Iran is “training, arming, dispatching terrorists on five continents.”

“This same Iran vows to annihilate Israel,” he said. “If it develops nuclear weapons, it would have the means to achieve that goal. We must not let that happen. And as prime minister of Israel, I have a moral obligation to speak up in the face of these dangers while there’s time to avert them.”

In Congress, Netanyahu said he plans “to speak about an Iranian regime that is threatening to destroy Israel, that’s devouring country after country in the Middle East, that’s exporting terror throughout the world, and that is developing, as we speak, the capacity to make nuclear weapons—lots of them.”

Netanyahu argued that U.S.-Israel disagreements on how to prevent an Iranian nuclear weapon stem from some inherent differences between the two nations, including how the United States is a large country “in one of the safest neighborhoods,” compared to Israel’s being a small country in the dangerous neighborhood of the Middle East.

American-Israeli disagreements have been commonplace throughout the history of the countries’ roughly 70-year-old friendship, Netanyahu said. He pointed to U.S. Secretary of State George Marshall’s opposition to Israel declaring statehood in 1948, the American statement that Israel would be alone if it took military action against the Arab world in 1967, the suspension for U.S. arms transfers to Israel for three months after the Jewish state’s bombing of Iraq’s Osirak nuclear reactor in 1981, and America’s demand that Israel withdraw troops from its Operation Defensive Shield against the Palestinian terrorism of the Second Intifada in 2002. Despite these series of disagreements, the U.S.-Israel relationship has always grown stronger, Netanyahu said.

The prime minister called shared values between the U.S. and Israel the reason behind the strength of the countries’ alliance—noting how Israel is providing medical treatment to Syrian civil war refugees, giving a home to the Middle East’s only growing Christian community, and championing women’s rights in a way that no other country in the region does.

“The values that unite us are much stronger than the differences that divide us,” Netanyahu said. “Values like liberty, equality, justice, tolerance, compassion.”