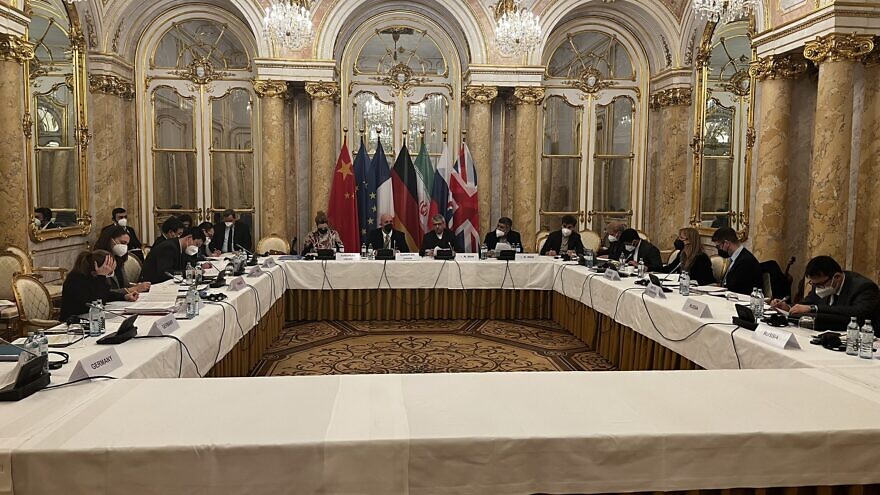 (February 28, 2022 / JNS) The United States, China, France, Russia, the United Kingdom and Germany—known as the P5+1—appear to be closing in on a deal with Iran over its ongoing nuclear-weapons program. At the same time, Israeli officials view Western reactions to Russian President Vladimir Putin’s war on Ukraine with extreme unease because allowing him to invade without consequence has not only emboldened Moscow but likely encouraged other nefarious actors as well.

Michael Doran, a senior fellow and director of the Center for Peace and Security in the Middle East at Hudson Institute, believes that an agreement with Iran “puts Israel in a pickle.”

“It turns the U.S., in effect, into a kind of guardian of the Iranian nuclear-weapons program,” he said. “If Israel launches large-scale attacks against the program, it risks getting into a major war that the U.S. opposes. If it opts for sabotage, tensions with Washington will rise. The coalition, which hangs on by a thread, would be endangered.”

Israelis view the U.S. administration and many European governments as pursuing a policy of appeasement against aggressors.

Richard Goldberg, a senior adviser at the Foundation for Defense of Democracies, told JNS that it’s “difficult to call this policy anything other than appeasement; they’re offering to pay the world’s leading state sponsor of terrorism billions of dollars on the hope that regime won’t move forward with nuclear weapons. The deal imposes no true restrictions on Iran; Iran gives up nothing and still preserves its option to develop nuclear weapons at any time of its choosing.”

The Biden administration promised a “longer, stronger” deal, but the one taking shape in Vienna, according to news accounts, seems shorter and weaker.

According to Goldberg, “rather than use the historic economic and political leverage it inherited to demand a longer and stronger deal, Biden abandoned the ‘maximum pressure’ campaign [of the Trump administration] in favor of maximum deference. Sanctions weren’t enforced, and in some cases, were formally relaxed to give Iran access to frozen funds. Political pressure at the International Atomic Energy Agency was pulled back. Missile and drone attacks against the U.S. and its allies went unanswered.”

“And all the while, Iran took advantage by racing forward with its nuclear program,” he said. “Now, rather than simply reject a weaker, shorter deal and return to pressure, the Biden administration is poised to leave Iran on the nuclear threshold.”

Israel faces serious threats from Iran, and a deal will only make them worse. Why is the United States—Israel’s “greatest ally”—so obsessed with a deal if it is not effective, cannot be monitored, and will ultimately hurt Israel and others in the region?

“Things aren’t going well for the administration domestically, so this looks a lot like a president desperate to run away from a difficult situation and try to spin whatever he can get as a diplomatic win,” suggested Goldberg.

‘This region will become a nuclear tinderbox’

Former Israeli Prime Minister and current opposition leader Benjamin Netanyahu told a group of American Jewish leaders on Feb. 22 that the nuclear deal with Iran taking shape in Vienna would lead to a conflagration.

“This deal will bring war—this deal that” the Americans and world powers “are coming back to,” he said. “This region will become a nuclear tinderbox. This will bring war and then another war. “We are going from a bad deal to a worse deal.”

Netanyahu made the remarks in Jerusalem to the Conference of Presidents of Major American Jewish Organizations’ Leadership Mission during their visit to the Knesset on Feb. 22.

Irina Tsukerman, a human-rights lawyer and a geopolitical and security analyst, takes it a step further, telling JNS she believes that Ukraine “was likely sacrificed well in advance in exchange for a lucrative energy deal and Iran’s cooperation in Vienna.”

According to Tsukerman, Ukraine was largely sacrificed “in an effort to secure Russia’s cooperation towards pushing the recalcitrant Tehran towards some version of a deal that Biden—after many foreign and domestic policy failures—could tout as his crowning achievement and legacy before the midterms. For that reason, we are seeing that after months and weeks of stagnation, and the Vienna talks appearing on the verge of a breakdown, all of a sudden major ‘progress’ has been made.”

“The Ukraine invasion directly benefits the Islamic Republic,” she said. “Biden has alluded to securing cheap Iranian oil as an answer to high gas prices in the United States, a policy which has now been picked up by the media. Biden hit on rising oil prices again in his Tuesday speech, as did [U.S. Vice President] Kamala Harris in the course of the Munich Security Conference.”

Tsukerman said “Biden is cynically using Russia’s destabilization of the global energy market to argue for the return to appeasement for the ayatollahs.”