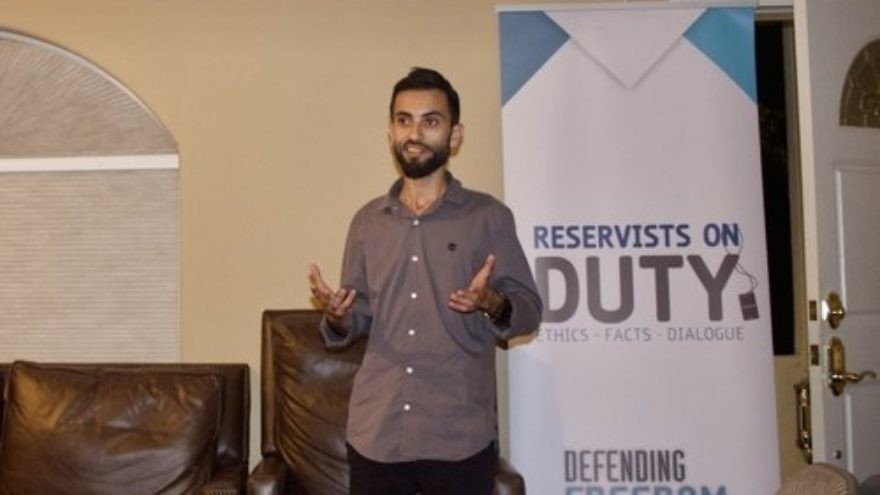 A representative of Reservists on Duty (RoD) speaks Monday night at Stanford Chabad as part of a program highlighting the stories of Israeli minorities. After the Stanford Israel Association and Stanford Hillel withdrew from the RoD event, Chabad agreed to host it. Credit: Stanford Chabad.
Republish this article
714 WORDS
Spread the word.
Help JNS grow!
Share now:

(October 17, 2017 / JNS) The Stanford Israel Association (SIA)—a student group at the California-based university that claims it “aims to engage Stanford students with all that the Jewish State has to offer, through culture, politics, and identity”—pulled its support for a program highlighting the stories of Israel’s minority populations.

In a statement released on Facebook late Sunday to announce its decision, SIA cited “a combination of procedural issues and concerns raised by the University regarding past behavior by the organization due to speak,” Reservists on Duty (RoD).

The event, “Stories From Israeli Minorities,” was scheduled to take place less than 24 hours later at the campus’s Hillel facility. Instead, Stanford Chabad stepped in to host RoD Monday night, and the event went on as planned.

“Our ultimate goal as the premier pro-Israel group at Stanford is to advocate for a more positive campus conversation regarding the Jewish state,” SIA told the Haym Salomon Center regarding its decision. “Given the concerns raised to us from the Stanford administration regarding RoD’s past behavior on other campuses, we do not believe this event would have furthered that goal. We regret not being able to promote the voices of Israel’s minorities, as was the purpose of the event, though we are certainly looking into opportunities to do so in the near future.”

While the reference to RoD’s “past behavior on other campuses” remains unclear, the most recent noteworthy event took place in May 2017 at University of California, Irvine.

Hosted by Students Supporting Israel, IDF reservists speaking on behalf of RoD had to be escorted out by police following a violent protest by anti-Israel students. The Jewish, Christian and Muslim IDF delegation was on campus to counter “Israeli Apartheid Week” events at the university.

The protest was documented on video by smartphone cameras, ultimately leading to the anti-Zionist group Students for Justice in Palestine being placed on disciplinary probation for two academic years.

“As a Jew, I don’t know what to say to the delegation [that was scheduled to speak at Stanford],” said Amit Deri, founder of RoD. “They are a group of minorities, one Druze, one Bedouin, one Muslim and one Arab, who suffered a lot of criticism from the Arab community in Israel. They’ve flown all the way from Israel to San Francisco for an event that was confirmed a month ago. And now, a few hours before it was to begin, they cancel it. I don’t know what to say to my people. I felt ashamed.”

He added, “As far as ‘past behavior’ is concerned, our ‘past behavior’ at UC Irvine resulted in the sanctioning of SJP because they shut down our event. When I saw the SIA statement, I didn’t know what to think. This Arab delegation came all the way from Israel, left their jobs. They’re not getting paid, they are all volunteers. They left their life behind, suffered a lot of criticism from their society because they chose to defend Israel abroad—and hours before the event, they say they are canceling. I think it’s a shame. We felt very offended.”

Stanford Hillel said in a statement that it chose to cancel the RoD event “due to concerns raised by the University.” The university did not immediately respond to a request for comment seeking clarification about its “concerns.”

“Fortunately our partners at Chabad are able to host the program and we are encouraging students to attend with our executive director, Rabbi Jessica Kirschner,” Hillel officials said before the event ultimately took place Monday at the Chabad. “Canceling the event was a mistake, and we apologize for any confusion or inconvenience.”

Deri said the delegation was comforted that Chabad agreed to host the program. Attendees heard the personal stories of the non-Jewish reservists, who spoke about being minorities in Israel, their love for the Jewish state and their desire to defend the country.

The current RoD delegation will be speaking at colleges and communities across the U.S. in California, Arizona, Minnesota, Pennsylvania and New York, covering 12 cities. The tour concludes Oct. 28 and includes reservists who identify as Palestinian and Christian, as well as a Muslim woman who is sharing her feelings about Israel providing opportunities she would never have anywhere else in the Middle East.