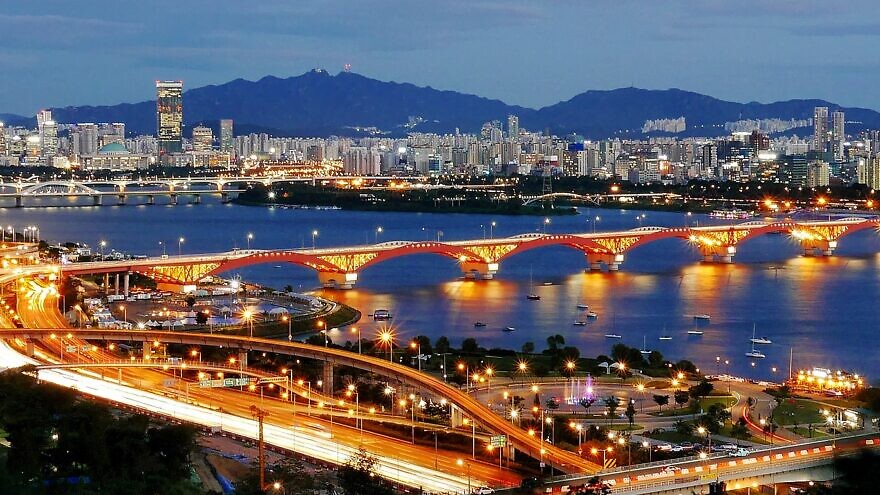 (September 29, 2022 / JNS) South Korea ratified its free trade agreement with Israel on Tuesday. It’s the first FTA that Israel has signed with an Asian country. The agreement goes into force on Dec. 1.

Israel exports about $1.5 billion annually to South Korea and imports $2 billion in goods.

“South Korea is the 11th-largest economy globally. Not too many people are aware that it’s a global manufacturer. It’s definitely a very innovative country producing many technologies,” said Ohad Cohen, director of the Foreign Trade Administration in Israel’s Ministry of Economy and Industry, the lead agency in negotiating the accord.

“We believe that the benefits for the Israeli economy from this FTA will be composed of two elements,” Cohen told JNS. “First, Israel will be able to export to South Korea duty-free. Second, South Korean imports will be exempt from customs duties.”

Seoul has signed 18 free trade pacts with other countries, including the United States. “The U.S and the E.U., which are major competitors for our advanced industries, already have FTAs with South Korea. Now we will be able to compete on an equal footing,” he said.

“As for the other benefit, a significant part of South Korea’s $2 billion in exports [to Israel] is vehicles. There’s a 7 percent duty on vehicles. The new agreement means South Korean cars will be exempt from this customs duty. We hope that the Israeli consumer will be able to benefit from this reduction,” he said.

For Cohen, one of the most exciting aspects of the agreement will be the surprising and unpredicted benefits that come from collaboration in high-tech. “It will be interesting to see how we work together,” he said. “We have signaled to the private sector that we think it’s a good idea that they cooperate with each other.”

Dan Catarivas, director general of foreign trade and international relations at the Manufacturers Association of Israel, told JNS that the chief importance of the agreement for his group is that it will help its members better compete.

“For the last couple of years, we were slowly losing market share to European products enjoying the benefits of the E.U.’s free-trade agreement. We were facing a handicap vis-à-vis the Europeans,” he said.

“On the import side, the big story is the cars,” Catarivas agreed. “Korean brands like Hyundai and Kia are very popular in Israel. The customs duties on those cars will be eliminated.” However, he said he wasn’t sure the reduction would be reflected in car prices. “It’s a commercial issue as to what extent the price will come down. We hope that it will,” he said.

Catarivas said the FTA with South Korea might have an unintended benefit—putting pressure on Japan to strike its own FTA with Israel. “Japanese cars will be at a disadvantage in relation to the Korean cars,” he said. “For quite a long time already we have been calling for our government to open FTA negotiations with Japan, and I know that the private sector in Japan is also keen on that.”

While Israel is actively working to expand its economic ties in the region, Japan will likely have to wait as Israel is negotiating FTAs with China and Vietnam. Those will be next.

Alon Levkowitz, a specialist on the Korean peninsula at Bar-Ilan University, said that the FTA was in fact agreed on in 2019. While Israel ratified it relatively quickly, it took quite a bit longer for South Korea.

“We have to understand that from the Korean point of view, they would have preferred to sign an FTA with one of the other Middle Eastern states,” he told JNS. Israel’s $3 billion in trade pales in comparison to the $100 billion in trade South Korea enjoys with Saudi Arabia and the other Gulf states.

Seoul is sensitive to the danger that upgrading relations with Israel might hurt trade with other Middle Eastern states. “South Korea’s president never visited Israel. It’s because Korea is concerned that it might influence trade,” Levkowitz said.

There is also the Korean public’s attitude towards Israel, which skews negative, fueled by media coverage. “We’re not on the main news in Korea generally but when we are, we don’t look nice, to put it bluntly. It’s us bombarding Gaza,” he said. “I’ve spoken to students in Korea and it’s difficult to convince them of the justification. Part of the problem is that they don’t know the details and they think in black and white. We are Goliath and the Palestinians are David.”

Levkowitz said that the Abraham Accords, signed between Israel and several Arab states in 2020, could impact the Korean government’s thinking. “South Korea saw the Gulf states signing an agreement and even the UAE signing an FTA with Israel,” he said, adding that if trilateral trade develops between Israel, the United Arab Emirates and South Korea whereby the UAE and South Korea can invest in the Palestinian Authority, “it would reduce South Korea’s concerns.…It will allow Korea to be perceived as an impartial player investing both in Israel and in the Palestinian Authority.”

That, in turn, could free South Korea to boost relations with Israel, Levkowitz argued. “As it is, that the new government of President Yoon [Suk-yeol] ratified the FTA is important. It’s a positive sign of an improvement in relations.”