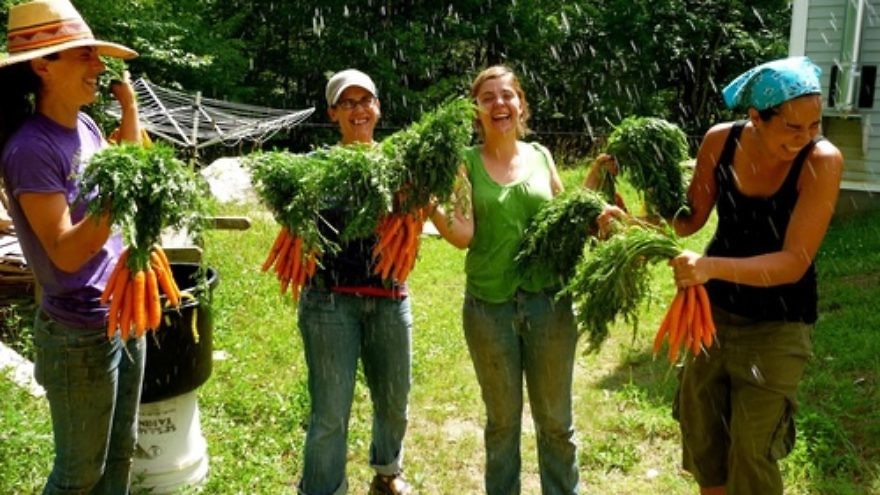 (December 21, 2014 / JNS) In December 2007, leaders of the Hazon nonprofit drafted seven-year goals for what they coined as the “Jewish Food Movement,”whose emergence has led to the increased prioritization of healthy eating, sustainable agriculture, and food-related activism in the Jewish community. What do the next seven years hold in store?

“One thing I would like to see happen in the next seven years is [regarding] the issue of sugar, soda, and obesity, [seeing] what would it be like to rally the Jewish community to take on this issue and do something about it,” says Nigel Savage, Hazon’s founder and president. Additionally, Savage predicts that Jewish food festivals “will grow the way Jewish film festivals grew” and a generation from now “will be some of the biggest events in American Jewish life.”

Hazon hosts its eighth annual Food Conference from Dec. 29 to Jan. 1 at the Isabella Freedman Jewish Retreat Center in Falls Village, Conn. This year’s conference focuses on the theme of “Poultry, Pollinators and Policy,” exploring the topics of ethical eating, the sources of food and ecosystems, and food activism and policy.

Savage notes that, so far, the Jewish Food Movement has bolstered initiatives and trends including Jewish community supported agriculture (CSA), Jewish educational farms, Jewish food education as a discrete discipline, a Jewish working group on the U.S. Farm Bill, new ethical practices in the kosher meat business, and serious consideration of what observance of the sabbatical (Shmita) year might mean.

The annual Hazon Food Conference, Savage says, “is a celebration of everything to do with Jews, food, and contemporary life, to bring people together across difference.”

“Look at the people [attending the conference]: they are literally kids to 80-somethings, Orthodox rabbis, hippies, and people not involved in Jewish life,” he says. “Food is capable of separating people and also of bringing us together.”

The food conferences have proven to significantly influence the career paths of many participants. Elan Margulies—the director of Teva, whose programs use experiential education to help participants develop a meaningful relationship with the natural world and deepen their connections to Jewish tradition—recalls that his immediate family members made life-changing decisions after visiting the 2007 Hazon Food Conference. His sister left her job in music administration at the Chicago Symphony to join Adamah, a three-month farming fellowship and leadership program, and his parents decided to pursue a more sustainable path for the acreage of farmland next to their family business that had been rented to a corn farmer.

“They wanted to do something gentler on the earth than corn farming,” says Margulies.

Margulies’s parents created garden plots for people in the family business and other community members, and developed a Jewish education project in Chicago as part of their farm. They brought chickens into synagogues, and at the farm had people milk goats, go on walks to gather wild edibles, make cheese and ginger beer, and “do Jewish crafts as a way of allowing Jews to develop a connection with the earth,” Margulies says.

“In recent years food has been a rallying focal point where the environmental and justice movements intersect,” she says, adding that because Judaism has a rich agricultural history, “the connections feel exciting to make because they come from a place of authenticity.”

Koenig got involved in the Jewish Food Movement while working for Hazon from 2006-2009, eventually running its CSA initiative, the annual Food Conference, and other food programs. She says the Food Conference serves as a time to push meaningful conversations forward, citing the slaughtering of three goats at an early conference “with the hopes of teaching about the kosher laws, animal welfare, vegetarianism, and sustainable meat consumption.” This was a controversial move, even causing some people to boycott the conference, but Koenig says that for her it was “a very powerful experience” and started “some really important conversations.”

Also active in the Jewish Food Movement is the Leichtag Foundation in Encinitas, Calif., whose mission is “igniting and inspiring vibrant Jewish life, advancing self-sufficiency and stimulating social entrepreneurship in coastal North San Diego County and Jerusalem.” Two years ago, the foundation acquired 67.5 acres of agricultural property for a community educational farm, and has already donated about 3,000 pounds of organic vegetables grown at the farm to the local food bank. Leichtag also seeks to educate people from disadvantaged communities on basic gardening and cooking skills.

“Our work is about breaking that cycle of poverty and helping people reach a higher level to maintain jobs, family, and food security, looking at the systems and organizations that are addressing some of the root causes,” says Naomi Rabkin, the foundation’s director of strategic initiatives.

Rabkin got her start in the Jewish Food Movement at the first Hazon Food Conference and chaired the gathering in 2010. The first conference “really opened my eyes to the way that sustainable agriculture and food could bring together a community,” she says.

Rabbi Andy Kastner, former director of the Jewish Food Justice Fellowship, points to the Jewish Food Movement’s connection of sacred and agricultural rhythms, which he says enables communities “to put dirt back under their fingernails and engage in a Jewish life that is active, doing, and reactive” to agricultural practices.

Shamu Sadeh, cofounder of the Adamah fellowship and an environmental educator for 25 years, takes people into the forest and the mountains to try to connect them “to hemlock trees, salamanders, the life out there.” That is often “a leap for a lot of people, especially in this culture,” says Sadeh.

“Entering into the gateway of food is more immediate,” he says. “It gives you a connection to the world, how your action affects a hundred different people… It is a perfect nexus. The Jewish Food Movement is about bringing people together who are somewhere in that web of food issues and Judaism.”

Anna Hanau—a former Adamah participant and Hazon staffer, and cofounder with her husband of an ethics-focused kosher meat business called Grow and Behold—claims to be the only person who has attended every Hazon Food Conference. She says a critical aspect of the conference is combining hands-on activities with the exploration of ideas, citing a bread class on using a sourdough starter that went beyond the practical details to examine the “slow food” movement, which uses traditional approaches to make food that might take longer but can be healthier.

“The Food Conference was the place where these two things were coming together: exploring and doing/making,” she says.

Hanau and her husband, who she met at Adamah and who is trained in shechita, first thought they would be organic vegetable farmers—but they revised that idea when they started to think about the costs and feasibility of sending their kids to Jewish day school.

“We got married in 2009. That winter we realized there are a lot of organic vegetable farms, but what there is a lack of is sustainable kosher meat, raised outdoors with room to move around,” Anna Hanau says.

In 2010, the couple started Grow and Behold, which originally only provided kosher chicken but later added beef, lamb, turkey, and duck. The business works with farmers to give chickens access to the outdoors, so that their manure fertilizes the ground rather than polluting streams. The Hanaus are also committed to raising meat near slaughterhouses, limiting gas usage and reducing stress hormones in the animals during shipping. Grow and Behold tries to help its customers understand that while its meat is more labor-intensive and therefore pricier, it is also “better for you, for the earth, and for farmers,” says Hanau.

Becca Weaver, the farm and sustainability director at the Boulder JCC in Colorado, is behind the ongoing project to build a community farm next to the JCC’s new facility. The site is a former agricultural property that includes goat and chicken coops in outbuildings. Though the farm is still in the idea stage, it has set at least one concrete goal.

“We will grow enough food to be able to donate and make an impact on food insecurity in Boulder,” says Weaver.

The JCC’s resident goats, meanwhile, have already been a hit with the synagogue across the street.

“Last Purim, one of the goats was giving birth during the party. Almost every single kid got to leave the synagogue and watch the goat being born,” says Weaver. Fittingly, the newborn goat was named Vashti, after the first wife of the Purim story’s King Ahasuerus.