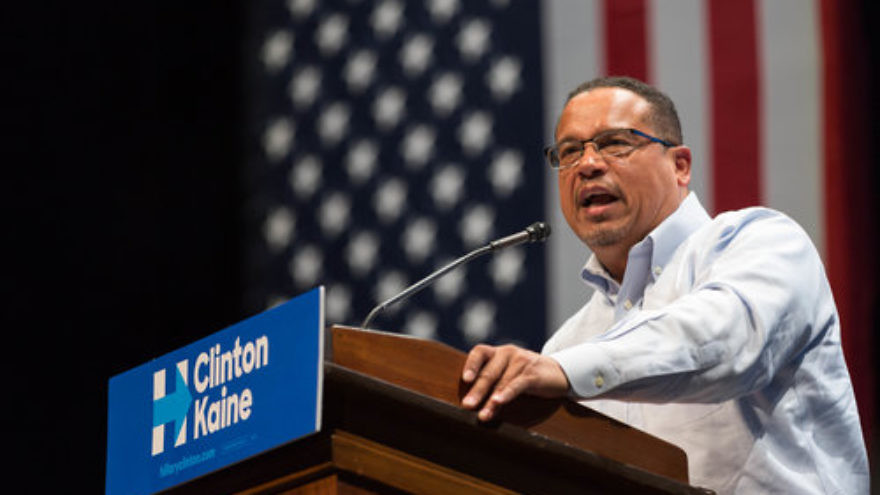 (November 17, 2016 / JNS) WASHINGTON—A growing number of pro-Israel activists and Jewish community figures are expressing concern that Minnesota’s U.S. Rep. Keith Ellison will turn the Democratic Party away from Israel if he is elected party chairman.

The election of Ellison “would bode badly for Jews,” longtime Democratic consultant Dr. Hank Sheinkopf told JNS.org. “His positions on Israel fit the pattern, noted by recent research, of identified liberal anti-Israel bias and the movement of Democrats away from Israel.”

Ellison’s controversial statements and actions date back to the 1990s, when he served as a local spokesman in Minnesota for Louis Farrakhan’s Nation of Islam movement. Ellison raised eyebrows when he publicly claimed in 1995 that Farrakhan “is not an anti-Semite.”

Since his election to the U.S. House of Representatives in 2007, Ellison has emerged as one of the most vocal congressional supporters of the Palestinian cause. He has organized letters urging more U.S. pressure on Israel, voted against funding Israel’s Iron Dome anti-missile system, and spoken at fundraising events for the Council on American-Islamic Relations (CAIR), a hardline anti-Israel group. While visiting Hebron this past summer, Ellison tweeted a photograph of a placard accusing Israel of “apartheid.”

Rabbi Menachem Genack of Englewood, New Jersey, a prominent Jewish supporter of Hillary Clinton’s presidential campaign, said he would be “disappointed” if Ellison is chosen as chairman of the Democratic National Committee (DNC) because that would “accelerate the process” of pulling the Democratic Party away from its traditional pro-Israel positions. Genack told JNS.org that he will be speaking to his colleagues in the party to explain his “concerns about Ellison’s views on Israel.”

New York State Assemblyman Dov Hikind, a Democrat who represents a heavily Jewish district in Brooklyn, strongly criticized the decision by New York’s U.S. Sen. Charles Schumer to endorse Ellison. In an interview with JNS.org, Hikind, asked, “Does Senator Schumer actually believe that there is literally not a single other person in the Democratic Party, anywhere in the country, who would be a better choice than Ellison? Why is Schumer in such a rush to support a candidate who is so unfriendly to Israel?”

Hikind said Ellison “is the most radical candidate imaginable, someone who represents the extreme left wing of the party, which is why he’s being promoted by Bernie Sanders, Elizabeth Warren, and J Street—in other words, Ellison is being backed by all the wrong people if you care about Israel.” The assemblyman noted that Ellison has occasionally claimed to be a friend of Israel, “but if Israel has to depend on support from the Ellisons of the world, it would be in serious trouble.”

Some pro-Israel activists recall, with dismay, Ellison’s efforts to unseat a pro-Israel New Jersey congressman, Steve Rothman, in 2012. Dr. Ben Chouake, president of NORPAC, a Jewish political action committee in northern New Jersey, said it was “extremely unusual” for Ellison to target Rothman, “since Rothman was a fellow Democrat, in a district halfway across the country—what could motivate him to go to such great lengths?” Ellison spoke at mosques in New Jersey, urging Arab-Americans to vote against Rothman.

Chouake told JNS.org he fears that if Ellison is elected chair of the DNC, “one of his priorities will be to pull the party away from Israel.” Ellison represents “the fringe of the Democratic Party, not the center, and would it make even harder for the party to have broad appeal.”

The rise of Ellison could drive Jews out of the Democratic Party, according to Jeffrey Wiesenfeld, a private wealth manager who worked in the administrations of New York City Mayor Ed Koch, a Democrat, and New York Governor George Pataki, a Republican. “There are many longtime Jewish Democrats who are on the fence about whether to stay in a party that has been tilting away from Israel—and if Ellison is elected, I believe a good percentage of them will leave the party,” Wiesenfeld told JNS.org.

Wiesenfeld criticized Schumer’s endorsement of Ellison as “a crass political calculation—he sees the party succumbing to the far left, and he wants to go with the flow so he can retain his position.” He said that “Schumer’s phone should be ringing off the hook with calls from members of the Jewish community, asking ‘What happened to your promise to be a ‘shomer’ (guardian) of Israel?”

Ellison’s office did not return a request for comment from JNS.org.

The only other declared candidate so far for the chairmanship of the DNC is former Vermont Governor Howard Dean. A date for the election has not yet been set. According to party rules, it must take place prior to March 31, 2017. To win, a candidate needs the votes of a majority of the 447 members of the DNC. About one-fourth of the members are the chairs or vice chairs, of state branches of the Democratic Party.